In a month of big-name releases, the debut from Mt. St. Helen's Vietnam Band rises to the top. (Grade: A) 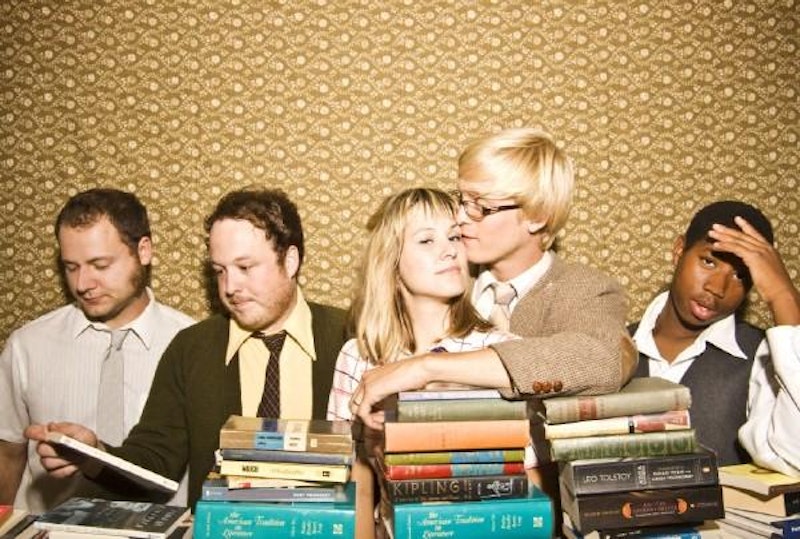 March has been full of pretty high-profile releases from marquee names like Bonnie 'Prince' Billy,  Yeah Yeah Yeahs, Neko Case, The Decemberists, and the nice young lady from The Knife who sings like Cindi Lauper. Yo La Tengo accomplished the hitherto impossible act of releasing bad, uninteresting music without necessarily tarnishing their own reputation, under the name Condo Fucks. But most of it’s been pretty good; even The Decemberists and Pete(r) Doherty have put out music that, for the first time, I can really tolerate.

But the self-titled debut album from Mt. St. Helens Vietnam Band is perhaps most deserving of attention. I have been on a full-fledged bender with this album over the last week and a half; sneaking out of my cubicle to have a listen, dropping it in any and all music-related conversation, regardless of genre-relevance. “Oh, you like Casiotone For The Painfully Alone?  Yeah, they are awesome.”  “Oh, well, it’s just one dude, a solo act.”  “Oh, yeah, well anyway, if you like them, then you would really like this other album here...”

This is always a bellwether of my seriously getting into a band. It’s otherwise somewhat difficult for me to tell whether or not I really like or dislike new music. My gut reaction gets confused with how I, on another level, think I “should” react to the music.

But Mt. St. Helens Vietnam Band bypasses that entanglement altogether. Perhaps because of the band's apparent impatience: the songs frequently jump all over the place, from ballsy guitars through odd-time, Zappa-esque rhythm changes into light and danceable indie-pop choruses. Aside from making for really original and unpredictable indie rock, this also shows that MSHVB can seriously play their instruments. They hit it best on “Albatross, Albatross, Albatross,” which is over 5 minutes long, but enthralling through wild ups and downs to the last fist-pumping riff:

The constant jitteriness of this album could get fatiguing for some, but MSHVB distinguish themselves clearly from bands with larger-than-life, experimental tendencies—like Mars Volta, Trail of Dead or even recent Modest Mouse—in that they eschew the latter bands’ aspirations of rock-star grandeur. I can tolerate such epic gestures better than many, but for those who cannot, MSHVB's lighter side and their refusal to take themselves too seriously will be refreshing amidst all the heavy jamming and unconventional song structures. Case in point, the video for "Cheer for Fate":

You know exactly where this video is going from the get-go, but that doesn’t make it any less awesome. I think I almost cried when they broke those guitars. But there’s some great advice to be taken away here: there have been so many times where I should’ve just burned my friend’s magic cards or slashed the tires on his ‘88 chevrolet “silver-surfer” instead of trying to talk him through his romantic fuck-ups.

MSHVB took their playful image a step further with the PSA’s they spread around prior to their album release. In this particularly hilarious one, MSHVB’s 14-year old drummer (yes, fourteen) spreads the good word on proper safety precautions.

My only small problem with Mt. St. Helens Vietnam Band concerns guitarist/singer Benjamin Verdoes's voice. It certainly ain't a bad set of pipes, and I find it very difficult to call any aspect of this band's sound derivative, but his grating tenor makes for a bit of indie rock poster-childism. Then again, I am glad he doesn't sing like Colin Meloy from The Decemberists or Antony Hegarty from Antony & The Johnsons; both have unique voices that I can't handle in excess of a few songs. Either way, this is nothing more than a nit to pick. Mt. St. Helens Vietnam Band take the cake for the month of March.