Former Lipstik frontman Sam Jacobs is back with a new name and an improbably beautiful album about the nation's failing healthcare system. 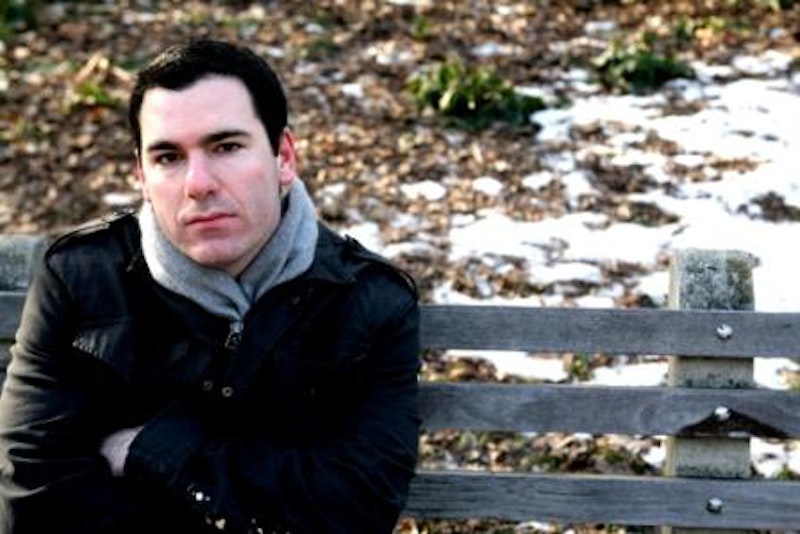 A couple of days ago I wrote a blog post about the new album from Sam Jacobs, former frontman of Lipstik, now recording under the moniker The Flying Change (taken from the title of a book of poetry by family friend Henry Taylor). That album, Pain is a Reliable Signal, as I wrote in the post, is a definite early contender for 2009's album of the year, even if Pitchfork and Stereogum haven't caught on yet. Pain is a Reliable Signal is a chronicle of the four-plus years Jacobs and his wife have spent in and out of hospitals around the country, trying to find some treatment for his wife's debilitating spinal condition. Jacobs recruited award-winning producer Paul Brill, famed sound engineer Robert L. Smith, and a who's-who of indie rock backing musicians to record with him. As Jacobs has said, "[Paul] and I wanted every moment to be incredibly vivid. Small fragments of melody and emotion... [we] went through the songs with a red pen and we kept editing and editing until they were as tight as possible." I corresponded with Jacobs yesterday via email about the new record.

SPLICE TODAY: Are you officially done with the Lipstik name now, or do you think of The Flying Change more as just a side-project?

SAM JACOBS: For now, I’m officially done. The issue was that the name Lipstik really got stuck in people’s heads and they associated it with a glam band and/or leather and/or something else. At first I was happy for the irony but when stories about the name itself started taking precedence over the music I realized it was time to make a change. People’s attention spans are short enough without having to worry about whether their ideas about a band name are keeping them from listening with an open mind.

It also made sense because Lipstik was really about an earlier time making music with a different group of people. When I started recording with the new band and the songs were sounding so wonderful … well it felt like it was worthy of a fresh start. I’d love to just go out there as Sam Jacobs but there are too many people with that name. And I kind of like bands or projects that are one guy but have a name that they can hide behind. Like Iron & Wine or Magnetic Fields or something. Gives me more flexibility.

I have this idea for a dance record called Kizz using the name Lipstik but we’re not there yet. I think the next Flying Change record will be called Living At The Movies, which is a Jim Carroll book of poems. But first I’ve got to try and get people to hear this record.

ST: You drew in a lot of fine support on this album, both in production and backing musicians: Paul Brill, Robert L. Smith, Rob Burger, Bill Dobrow, and on and on. How'd you wrangle this group together? You recorded all of this in just two sessions, right?

SJ: Many years ago I ran a very unprofitable record label (Annex Records) and through that I met Paul Brill. I ended up managing him for a very brief period right around the time of his first post-Envelope (his old band) record, Halve the Light. We remained friends over the years. In addition to being a wonderful producer and songwriter, Paul has also become an award-winning film composer and it was through Paul that I was introduced to everyone that played on the record. The beautiful thing about New York is that the very best musicians in the world are around and they’re often really excited and interested to work on different projects so getting amazingly talented people to work on these tunes was not as difficult as it sounds, provided you know who to call.

About two years ago, I put together a disc of 20 demos for Paul. He sorted through them and together we picked out 11 tunes we wanted to focus on. We went through each song, took a look at the lyrics, looked at structure, and really tried to get to each song’s essence. Mostly that meant cutting out a bridge where it wasn’t necessary. The songs are all about three minutes or under and it’s because we wanted to create these perfect little pop moments and cut off all the fat.

A year ago, we had the structure of the songs in place, and we got everyone in a room, had one rehearsal, and then hit “record” the next day. Basic tracks were recorded live in two takes including guitar, drums, piano and bass all in the same room and then we overdubbed the other stuff at different points throughout last year.

When you have incredible musicians and a great engineer that can just dial up the sounds you need, all you have to worry about is playing the music and letting the artists bring the songs to life and that’s what happened.

By the way, I think everyone is great on the record (obviously) but I think special notice should be paid to Matt Ray. Matt is one of the best piano players in town and his melodic instincts create some of the most beautiful moments on the record including on the outro of “Hold My Heartache”—the best musical moment I’ve ever been associated with.

ST: When did you first start playing music, and can you tell us about some of your earliest influences?

SJ: I played music badly on and off since I was a young kid. My parents were in the Foreign Service and I grew up overseas. I started taking piano lessons in El Salvador. Stopped when I got back to the States. Picked up a guitar a few years later.

I didn’t start writing songs until very recently, however. “Natural Beauty” was kind of the first song that I formally “finished” and that was only because I realized I could play the same progression over and over and still call it a song. A lot of songwriting (for me) is really about confidence. I didn’t realize I had the right to it. Then, one day, it clicked. You need a few parts that fit nicely together, like Lego blocks, and then you need some sentiment and emotion and a point-of-view and the rest takes care of itself.

This sounds ridiculous but the truth is that I think a lot of my songwriting skills have come from the fact that I’ve been singing made-up songs to myself since I was about five. I remember my neighbors leaning out their windows in high school telling me to shut up when I walked the dogs. I’ll do it wherever I am—just singing some little melody that’s popped into my head. I can seem a little crazy but if you’re going to walk around talking to yourself, New York is the place for it.

One of my earliest musical memories is sitting in my living room in El Salvador listening to Full Moon Fever over and over and over while I played Final Fantasy on the original Nintendo. I must’ve been about 12 years old at the time. The yard was outside and then past the yard the streets of San Salvador and then the volcano in the distance. Those songs take me back to that place every time I hear them. That’s why I covered “Yer So Bad” on the last Lipstik EP. The song’s been stuck in my head for 20 years. So Petty’s songwriting is a big influence on me.

ST: Any chance you'll be doing a tour in support of this new album?

SJ: The big gig we’re playing is Friday, April 17 in New York at Le Poisson Rouge. I’m playing with Paul and his band and Amber Rubarth, who is this phenomenal songwriter and musician that is kind of quickly becoming this enormous star. So I’ll be happy just to share the stage with them. We’re doing a variety show so there will be jugglers and acrobats and comedy and we’ll be playing a few different tunes together as one big group so it’s going to be a ton of fun.

After that, we’ll do some gigs around town and we might be heading out to L.A. and a few other major markets. But no formal tour as of yet.

ST: I read Henry Taylor's book The Flying Change back in college. It's a great collection of poems. He's your father's friend from college, right? Have you sent him the album?

SJ: He is indeed my father’s friend and former roommate when they were first years at the University of Virginia in the 60s. I’m surprised you’ve read it actually. Not many people have. I have not sent him the album mainly because he’s become a bit of a recluse. I’ve been cribbing stuff from him for a long time because I love his poems. They’re these sun-drenched Virginia countryside things, especially in that book, and they’ve stuck with me for a long time. Nostalgic, wistful, sentimental, melancholy. Like me I suppose.

ST: How is your wife these days? Any news on possible treatment?

SJ: My wife is an incredibly strong and talented woman. She’s whip-smart, hilarious, passionate and drop dead gorgeous. Yet she’s in pain pretty much every minute of every day and hasn’t let that keep her from doing what she wants to do in life. She’s built her jewelry business from scratch after being forced from the workforce because of her chronic pain. Unfortunately, it’s not a condition that is responding to any one specific treatment but she’s pursuing a variety of different remedies in the hopes that something will work. So far nothing has. The issue is that navigating the healthcare system and the insurance industry is itself a full-time job and at some point you almost have to decide if you want to spend your life chasing down claims agents and doctors that keep you waiting for three hours or if you want to live your life and she’s chosen the latter.

The shittiest thing about the whole situation is that it was the surgeries that caused the most damage and they still did nothing to alleviate her original symptoms. I have a totally different view of our healthcare system after this experience.

She would be in the hospital and finally have fallen asleep and it’s five a.m. and people have been coming in and out all night and drawing blood and sticking her with needles and then the docs do rounds at six a.m. and they wake her up again and none of the doctors know the case history and we have to keep telling them the same stories over and over and there’s wires and electrodes and tubes coming in and out of her. It just doesn’t compute. It just doesn’t seem like a place designed to make someone feel better. Nothing in a hospital seems designed for wellness. All these fluorescent lights and impersonal doctors and overworked belligerent nurses. It’s really depressing. It’s what the song “Dirty White Coats” is about. The helplessness you feel in a hospital surrounded by an uncaring and unyielding bureaucracy.