The folks at the Starbucks don't appreciate his Confederate flag T-shirt. 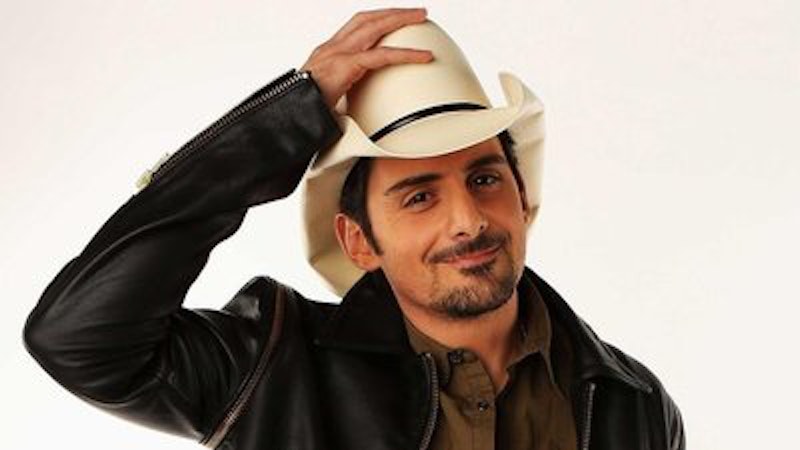 Brad Paisley's new song "Accidental Racist" is a sodden, self-pitying slog. Over surging, hookless country radio gush, Paisley's anonymous vocals blandly wail about how he's caught between Southern pride and Southern blame because the folks at the Starbucks don't appreciate his Confederate flag T-shirt. "I'm a white man/living in the Southland/just like you I'm more than what you see/I'm proud of where I'm from/but not everything I've done," he declaims, then mumbles about how Reconstruction was bad (for who, exactly?) and how we can't rewrite history so we might as well celebrate the symbols of slavery? Then LL Cool J comes on and starts to bargain: "If you don't judge my gold chains/I'll forget the iron chains." Hey, if you don't judge my big schnoz, I'll forget the Holocaust. Can't we all just get along?

Pretty much everybody has already weighed in on what a piece of shit this song is. But I think to really appreciate its badness fully, it might be helpful to listen to an earlier country music take on race.

That's Jimmie Rodgers, the father of country music, and the genre's first major star, with Blue Yodel #9 from 1930. The piano player is Lil Hardin; the trumpeter is her husband, Louis Armstrong.

Rodgers doesn't mention the Confederacy or race. Still, with Armstrong standing beside him, the opening lyrics seem fairly pointed:

Standing on the corner, I didn't mean no harm

Along came the police, he took me by the arm

It was down in Memphis, corner of Beale and Maine

He said, big boy, you'll have to tell me your name,

I said, you'll find my name on the tail of my shirt,

I'm a Tennessee hustler, I don't have to work.

In "Accidental Racist," Paisley sings " I try to put myself in your shoes and that's a good place to begin/it ain't like I can walk a mile in someone else's skin" —a couplet that seems half lament and half excuse. Rodgers, on the other hand, and with much less fuss, demonstrates that hillbillies and black folk have plenty of common ground. A half-century before hip-hop, this is a song about police harassment. Rodgers could be speaking for a young Armstrong, out there on the streets of Memphis—though Armstrong didn't usually yodel.

Armstrong gets to speak for himself, too, and, to no one's surprise, his trumpet is considerably more eloquent than LL Cool J's lyrics. The song, in fact, is a conversation, with Rodgers throwing out a line and Armstrong's horn answering with its mix of jaunty assurance and melancholy. The two performers couldn't be much more simpatico; both are completely comfortable with the blues and the raggy swing of Hardin's piano accompaniment.

"Accidental Racist" is an ostentatious declaration of difference and tolerance; you've got your traditions, I've got mine, but we can still tolerate each other. Rodgers and Armstrong, though, aren't tolerating each other's differences, because they aren't that different. Their musical traditions and influences, and even, the song suggests, their life experiences are congruent, almost as if they come from the same country.

That country is not the one that flies the Confederate flag. Paisley builds his marginal Southern identity on the symbols of slavery, identifying with a tradition of oppression. Rodgers builds his on the experience of being a hobo and a drifter on the butt end of the law. Paisley declares his Southern individuality by perpetuating completely anonymous country radio dreck. Rodgers declares his by demonstrating his links with the quintessentially Southern music of Memphis. "Accidental Racist" sees the South as white and the north as black; Rodgers and Armstrong, though, know their home, and their music, is integrated.

We tend to think that race relations in terms of progress. Once, we were benighted, but slowly we have crawled into the light. And it's certainly true that things have gotten better in some ways since 1930; we've gotten rid of Jim Crow, we've elected a black President. But Paisley's crappy track is a reminder that later isn't always better. Once there was room for a rural white identity which defined itself not in opposition to, but in continuity with, the black experience. Paisley's track is a depressing reminder of how thoroughly Lynyrd Skynrd has replaced Jimmie Rodgers for contemporary country—and of how thoroughly that is a change for the worse.