The Sun is the Radioactive Wasp Egg 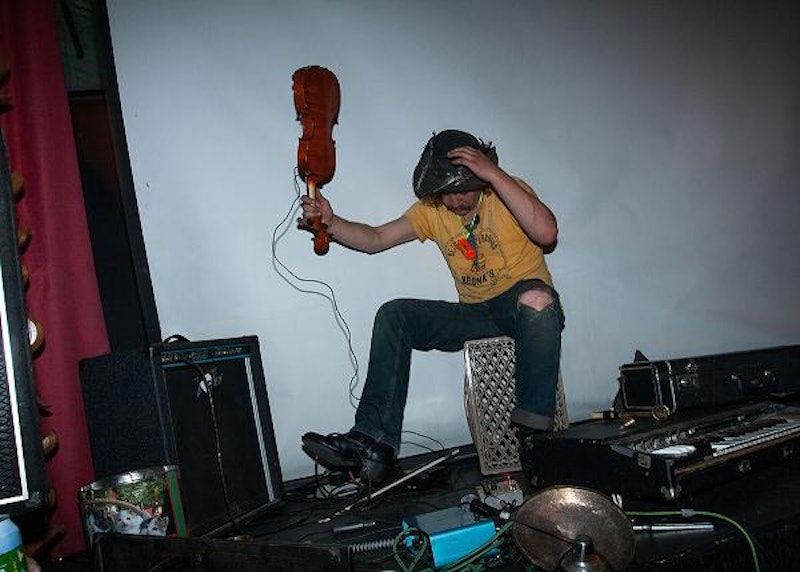 Loud clambering rusty sheets of metal are dragged down a long dark road with no end in sight. Perhaps a dead body, with maggots excavating its eye sockets, is waiting in the muddy distance. Distorted male vocals cut in violently, spouting indistinguishable clusters of broken English. Frequencies collide with one another and begin to grow, over-shadowing the chattering man who still rambles on as he falls deeper into the void of Pony Moon.

It's difficult for me not to be biased, as I’m a frequent musical collaborator with the noise duo, casting spells via violin squawks and piano patterns, hiding somewhere in between the drones. I'm an insider so I’ll be careful not to reveal any secrets or rituals you shouldn't know about. In whatever forms they manifest, the more you experience Pony Moon you realize the less you know: not just about music, but about the entire spectrum of reality. Nothing is sacred and at the same time everything is overwhelmingly divine.

Pony Payroll Bones, who rambles up and down the east coast, often lets the amplifiers speak for themselves, sometimes setting four to five amps against each other to fight it out with feedback. All the knobs are turned to 10. The shrill piercing tones collide with one another to create a dense field of demonic cacophony, summoning spirits that never should’ve been awakened. He beats the feathers of his bow against his fiddle until the hairs split and dangle down like strands of dead vine. His eyes poised, ready to attack, in a trance of his own inner enlightenment–a combat against the bitterness of the South. Many times Pony howls against the full moon, other times he throws fireballs at innocent bystanders. It all depends on the mood, atmosphere, and occasion—and often none of these matter at all.

Jenny Moon Tucker is the other half of the duo. Sometimes a sax is blared through contact microphones, and sometimes metal is scraped against strange percussive tools. Sometimes these jagged sheets of metal are thrown and banged against nearby surfaces. There’s a listening to Tucker's method that I can't quite grasp, a distant and foggy sound, hiding somewhere beyond the hills of sanity. Listening vibrations contact free jazz in a soothing amalgam, where a dense spiritual journey is shared. Nods to sax players like Ayler and Coltrane are worth acknowledging, but there’s also the wisdom and philosophy of free jazz drummer Milford Graves lurking somewhere between the brambles. A vision is buried deep in the murky ruins of audibility. Tucker is undeniably a poet of sound, manipulating the limits and barriers of what was thought impossible.

—The Sun is the Radioactive Wasp Egg is available in cassette format only. No streams.