The Parts That Make Up Robert Johnson’s Blues

The rock 'n’ roll narrative is so deeply ingrained that we take it for granted. 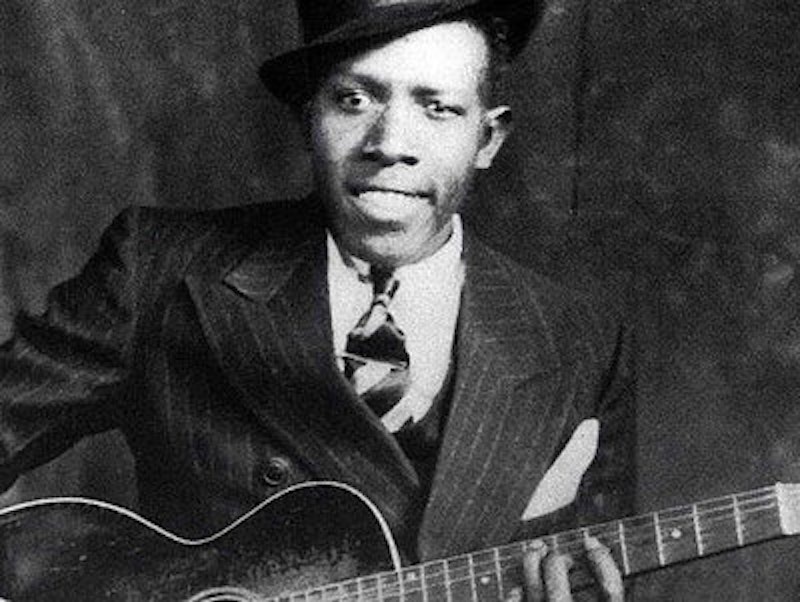 Six years ago, something remarkable happened: Robert Johnson started to play the blues in a silent room, instead of on a scratched LP with a dusty phonograph. For his 100th birthday, Columbia re-released his music on The Centennial Collection, and the remasters were perfectly quiet, with no hiss. As a fan, I realized that part of me missed the tape hiss, and yet I'd never heard him play as well as this; the music was finally whole. That missing static led me to question the most basic things in the blues—which he towers over, such that his shadow falls over everything that American musicians have recorded since. Why did blues artists sing some things twice, and other things once? What were the distinct movements of Johnson's acoustic blues guitar? The connection between Johnson and rock 'n’ roll is so deeply ingrained into the narrative of rock that we take it for granted, but if you play the tracks side-by-side (like Cream next to Johnson's own "Cross Road Blues") it's not obvious at all whether this howling vocalist with his flat-tuned acoustic guitar is really in a dialogue with the legends he inspired. To find the thread, you have to unlearn the blues and ask about it like a child.

When you listen to a bluesman repeat a line twice, the first thing you’re hearing is music waging a continuous struggle for existence. There’s a good chance that the room isn't listening the first time you say your piece, if you're just the hired entertainment or some grinning busker imposing himself on a skeptical crowd. So you say it again. If you're playing in the alleyways and bars of the Mississippi Delta, there's noise to contend with, and an acoustic guitar isn't built to beat that noise: people talking, drinks spilling, and the blare of the street coming in through a propped-open door. So you say everything twice, or three times even, building up momentum. The call-and-response from the audience works like an amplifier, similar to the "human microphones" that were reinvented by Occupy Wall Street. The blues deliberately leave open a beat between repeats for those shouts bouncing back, alerting everyone that something is happening, that the song has begun now—believe it!

This aching knowledge that half the blues are unheard, wrongfully so, accounts for the short, plain introductions at the start of every blues song. When Johnson claws his way through them, you can hear him enjoying the time alone with his muse; his guitar is quieter than everything else. The beginning of the song is just for him. It's the opposite of "At Last," by Etta James, where a whole orchestra is waiting on her as the de facto bandleader. It's likewise the opposite of "Somebody to Love," by Jefferson Airplane, when Grace Slick starts out a cappella, singing to a rapt generation. There's no confidence in the beginning of a blues song; at first, you can't tell which song you're even going to hear. There's never enough time to rehearse, so the first run-through of the line is the rehearsal, and the singer's untutored and ashamed.

These heroes survive—they abide, to quote The Big Lebowski. That’s plenty. The sound of their survival, and invincibility, is the sound of acoustic blues guitar. The low notes, strummed quickly in circular chord patterns, is the sound of walking in its most archetypal form, when you have to walk every mile from the splintered, burned-out ruins of your life to somewhere you can start over. It’s lonely, expressionless, and tireless, and so are the "boogie shuffles" that fill out the verses of the blues. They sure aren't boogies or shuffles for dancing.

The guitar is split in half by Johnson's open tunings; the bottom half is dusty, murky, and percussive, and the top is suave, mercurial, all set up for the bottleneck triplets that most casual listeners recognize as the "licks" in a blues song. The licks are where all the exuberance of the blues is set loose, and they have to be played fast, because there is a harsh sequel to every joyful second. The guitarist holds them back until the measure is almost over, and then rushes through them without jumbling anything. It may be desperate, but it can still be perfect "for a space." Even more common than the licks, especially when Johnson plays, are the brandished chords: single notes strummed faster than the meter, much faster, as well as louder and brighter on the recordings. That’s where the player reveals, out of nowhere, that he isn't beaten. He isn't even low. He's better than the catastrophe because he can make the tempest into a sign that he is alive. The song breaks its steady walk to leap.

I used to need the tape hiss on The King of the Delta Blues Singers to remind me that this music emerges from hardship and rises above it, so primal that its purity can't be soiled. The tape hiss was itself a symbol of the odds stacked against the music, just as I thought the Delta was a unique birthplace for American art, thanks to some mysterious, unrepeatable alchemy. But the heart of the blues beats with a very familiar, modern awareness that no place is much different from any other. The same sins are cheap everywhere, and some road crosses every place and then heads on. "If I could change my way of livin'/It would mean so much to me" Johnson sings, and I used to sing along earnestly, expecting him to change. But it isn't the man who changes. It's the place. One day everywhere will be what the Delta has become—somewhere a bluesman once played. Listening to The Centennial Collection, with its clean takes, I realize the rock 'n’ roll players didn't want to sound like Johnson. They wanted to echo, to echo like he does, like he does, still.