Hot Tears of Joy on a Peaceful Friday Morning

Music can exist in any way you choose. 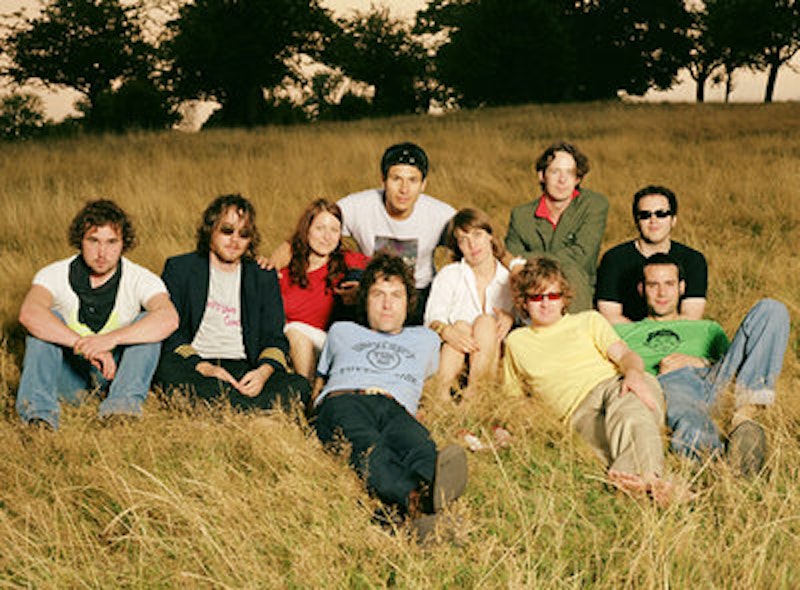 The band’s name is Broken Social Scene. I don't follow any band closely enough anymore to know when new albums are due. I used to know release dates. They were listed on Colbert, so I set the DVR. Broken Social Scene was one of a dozen or so bands I used to listen to obsessively. Enough time has passed that they now linger in my psyche. From a time when I wasn’t yet healed, or at the very least thought of healing as what happened to my thumb after it was broken. A time when I was a melancholic, musically-obsessed college dropout, working at a budget steak house, paying off student loans, and desperately trying to figure out what my next step might be. I was 22 in 2002. This music gave me solace, with anthems embedded. Their album titles: Feel Good Lost. You Forgot It In People. Forgiveness Rock Record.

They’re a collection of Toronto-area musicians. Kevin Drew and Feist launched solo careers from the group, but the music always felt collective in a true sense. An amorphous assemblage making a relatively indescribable form of indie pop that might as well be called Poetic-Cathartic-Messy Pop. Drew’s vocals are deep enough into the mix that his exclamations and exhortations burst out of the clouds, the layers of drums, synths, guitar reverb and everything else Broken Social Scene tosses into the soup.

Music is refuge and sanctuary. It can exist in any way you choose. Simple background waves. Joyous celebration. Party hype. Release from life’s grind. Certain collections of sounds unlock us. But maybe more than anything, music unleashes our emotions. Which is why it’s dangerous as well as healing. I used to obsess. I was hard-wired to let my anxiety run all over me, spill out onto all of my relationships, work life and writing life. I used to be legally blind to my own worries. Sometimes I would spiral into a funk. For a while I was just searching.

Would teaching ever really work out? Would I ever make a stable living? Would writing be a tool that I could rely on? To keep pursuing truth and discomfort and grapple with ideas of identity and society?

Over the last few years, I’ve gradually gained a sense of how stable our life has become. The puppies have grown up and learned to trust us. The house we were lucky to find. The savings we are lucky to have. It was 2010 when Broken Social Scene came out with their last record. We were planning the wedding for the following August. Our first Keeshond, Boumie, was a year old. I hadn’t been writing much. I was considering giving up on the idea of teaching. Substituting was a poor substitute for the real thing. Friends had moved away from San Francisco. I was uncertain of most things, other than Natasha. I’ve always had an intuitive sense that we were incredibly lucky to find each other and keep each other, even at our worst moments.

The tears start at the corners of my eyelids. It dawns on me that the voices conjure up the old familiar emotions. Pain. Isolation and loneliness. The lyrics that elevate honesty and fragility at the root. I choose to let tears out this time. Two lovely Keeshonds nearby on the couch.

A sunny morning at the end of March. My week ends on Thursday night, so I can relax at 10:00 a.m. today, this Friday. The baby girl will be here in less than three months. Last night, I could hear her gurgling and, for a moment, her heartbeat. Vibrating against my ear, just beneath Natasha’s belly button. I tell her to grow strong. I tell her all of her names. She becomes more and more real every day. I realize how far we have come. And we're only at the beginning.