Everyone has one karaoke song. 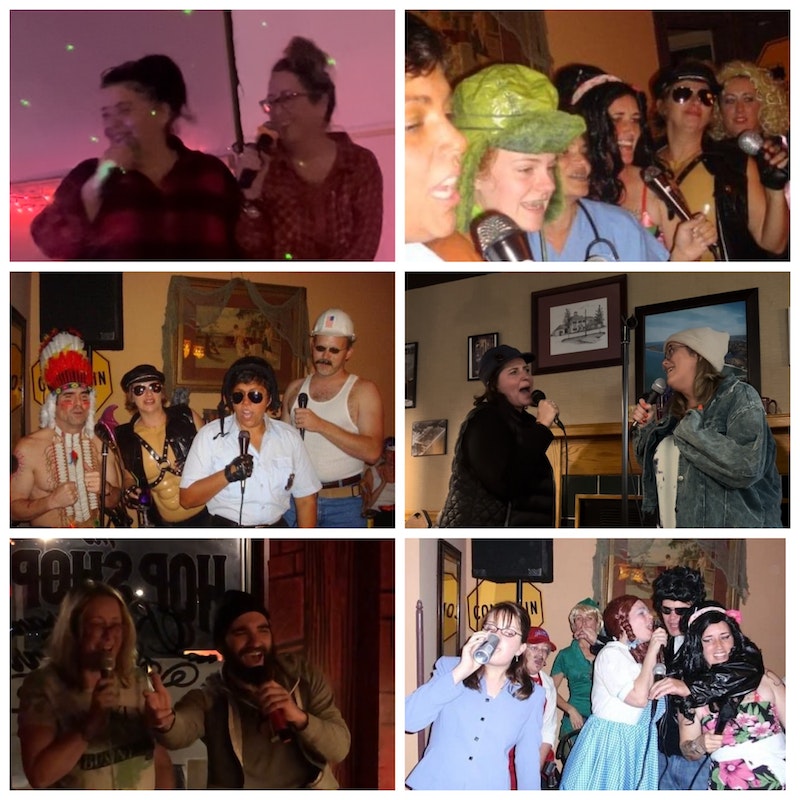 I couldn’t tell you when I first fell in love with karaoke, it’s been so many years. My kids had a karaoke machine growing up, and I remember dancing around our living room and their bedrooms when they were little girls singing “Get the Party Started” by Pink more than two decades ago. We used to have huge Halloween parties with nearly 100 people, and karaoke was always the center of the fun—whether it was a friend dressed impeccably as Amy Winehouse singing “Rehab” or the full crew of the Village People singing “YMCA.”

As I began traveling for sea glass shows coast to coast, on the Saturday night of the festival, I’d grab whoever was fun and not worried about being hungover and exhausted at the show on Sunday, and we’d find some local karaoke dive bar. From the small beach towns of New Hampshire to the bowling alley boardwalk bars of Santa Cruz California, I’ve sung badly in all of them. One time before a lecture, a woman came up to me and said “I couldn’t wait to come back and hear you speak again!” I asked her what I’d spoken on the year before and she said, “Well, it was a Sunday, so mostly you talked about how hungover you were from karaoke.” Hot tip, if ever given a choice, and anything educational is your goal, come to my Saturday lecture.

I’ve never been a good singer. I was in high school musicals, like the majority of karaoke singers, I’m sure. I wasn’t great there either, doing time in the chorus every year except my senior year, where I landed the appropriate role as the Wicked Witch of the West (Evillene) in The Wiz, forgetting the words to my own song on opening night.

Fast forward to karaoke bars today. The words are on the screen, so I can’t forget them. But I’m still the same mediocre singer. On behalf of the innocent victims in the bars who may not have had enough to drink, I don’t do solo karaoke. I’ll either sing in a duet or a group. I have a short playlist and often apologize to Linda Ronstadt, Sheryl Crow, Carrie Underwood, Air Supply, Gloria Gaynor or whichever artist’s songs are being relentlessly mauled by yours truly. It may be raining men, but it ain’t raining them in tune, my friends.

My favorite thing to do in a karaoke bar is to find someone sitting in a corner and get them up to sing. I have a unique ability to encourage someone who’s never been up to the mic to sing for the first time. Stage fright my ass; I can wear you down. Everyone has a karaoke song, I always say.

There was one beanie-wearing, hipster-bearded guy in New York sitting at the bar with a guitar writing in a notepad and never singing on karaoke night. I waited two hours and finally asked the DJ if he sang. The DJ said oh no, he never sings, he’s a songwriter though. I approached him. It was now my mission. He was in his 30s and I love singing “Santeria” by Sublime with someone, so I went over in my best damsel-in-distress mode and said, “Hey, are you gonna sing?” and he said “Oh no, I don’t sing.”

I explained I really wanted to sing Santeria but I don’t sing alone and needed someone to help, and would he consider it? He said no, he doesn’t do that, sorry. He was very nice. I returned to my friends and sent him a beer. He smiled and waved. I told the DJ it was only a matter of time and sure enough, about an hour later I was up there singing and dancing backup (once I get my “victim” up there I just hold the mic far away and let them go for it) to easily the best version of the song I’ve ever heard. He had so much fun and thanked me for the experience.

The DJ said “Are you the karaoke whisperer?” and I replied I just have a knack for getting people up here. Once I got a girl visiting from Ireland to sing a beautiful song, and her boyfriend couldn’t believe it, he’d never heard her sing. There are so many times I have gotten people to sing with my “everyone has a karaoke song” or “please help me I need a duet partner” line or by asking what musical artist they had on their wall when they were a kid.

Lately, although I’d always rather sing with a friend, I’ve been working on a solo song, because I feel like a hypocrite sending people up there. I’m thinking about launching my 57th life career as a very part-time karaoke DJ because my tiny island needs more karaoke and everyone has one song.