Louis Armstrong Was More Than a Smile

A new documentary tries to tell the trumpeter’s story, with only partial success. 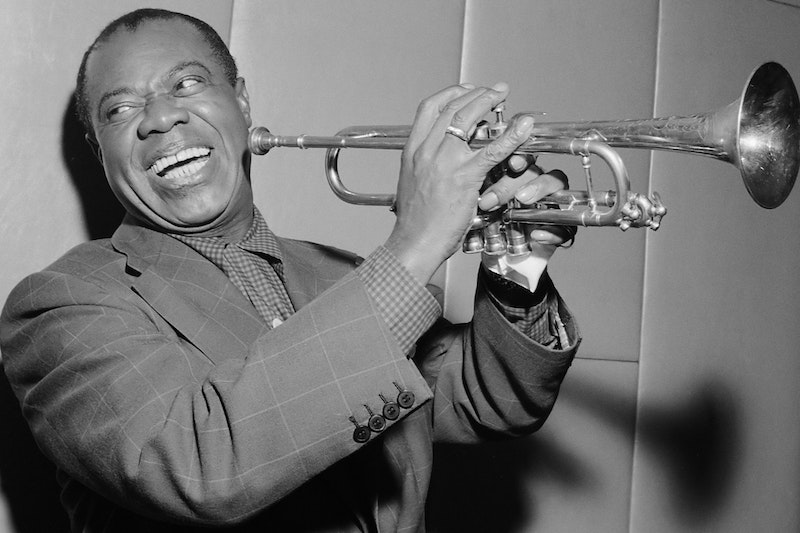 Trumpeter and singer Louis Armstrong (1901-1971) has a strong claim as the greatest American musician in history, and the greatest artist in any medium of the 20th century. He’s not lacking for accolades. But his mainstream legacy is overshadowed by his ingratiating last hit—the transcendently beautiful 1967 schmaltz ballad “What a Wonderful World.”

I was hoping that Sacha Jenkins’ Apple+ documentary Louis Armstrong’s Black and Blue would provide a fuller picture both of Armstrong’s incredible artistry, and of the man behind that determinedly radiant smile. Jenkins doesn’t disappoint entirely. The documentary is filled with Armstrong’s music and his surprisingly frank voice—he was an inveterate documentarian of his own life, and kept a wall full of reel-to-reel tapes as a kind of oral diary. Jenkins explains Armstrong’s importance as an improviser; the influence of his stunning high-notes, and his invention of scat singing. But the movie is also timid and organized confusingly. It leaps around in time for unclear reasons while leaving out large swathes of Armstrong’s life, and important details about his music.

You can’t pack a whole biography into 107 minutes, and the director shaped the film to some extent based on available footage. But even so, there are big omissions. The film never mentions the names Earl Hines or Ella Fitzgerald—the two collaborators with whom, at different points in his career, Armstrong made what are generally considered his most enduring recordings. There isn’t any discussion of the biggest aesthetic shift in Armstrong’s career. Armstrong played trumpet in an idiosyncratic style which caused long-term damage to his lips. He sometimes had to cut calluses off them with a razor. In 1935 his lip ruptured in an injury known today as “Satchmo’s Syndrome.” Afterwards, he played trumpet much more sparingly, concentrating on his gravelly, inimitable singing.

Away from the music, the documentary’s big erasure is Armstrong’s sex life. The film mentions that the musician had multiple spouses. But you’d come away from it thinking that the bulk of his life was spent in happy monogamous bliss with his last, Lucille Wilson Armstrong. This is a considerable misrepresentation. Armstrong slept with women the way he smoked cannabis, which is to say constantly and with great enthusiasm. The sole child he recognized as his own was a daughter out of wedlock who’s never mentioned in the film.

The movie does engage head-on with what’s probably the greatest controversy around Armstrong—his relationship to the Civil Rights movement. Armstrong wore blackface on at least a couple of occasions, and enjoyed performing songs associated with minstrelsy. During the 1950s and 60s, many in the jazz scene and outside it viewed him as catering in sycophantic ways to white audiences and white aesthetics.

Black and Blue provides a strong case that these critiques were simplistic. Armstrong grew up very poor in a violently racist South; he was cautious for good reason. He was very aware of racism, which he despised and pushed against where he could. He was proud when he eventually gained enough power to force the hotels that hired him to let him stay in the rooms usually barred to Black people. And his personal tapes allow us to hear his profanity-laced, often jaded estimates of white people. He tells one anecdote about dressing down a racist Hollywood callboy who refused to address him as “Mr. Armstrong.”

Armstrong didn’t keep all his criticisms of racism from the public. In 1957, he said he couldn’t go on a proposed tour to Russia because of his concern about school discrimination in Little Rock, Arkansas. He told a reporter that President Eisenhower, who was waffling about enforcing Black children’s constitutional rights, was “two-faced.” He also called Arkansas Governor Faubus an “uneducated motherfucker” which the reporter changed to “uneducated plow boy.” (The documentary, mystifyingly, uses only the bowdlerized quote and doesn’t mention the original.)

The backlash was predictable; lots of newspaper editors insisted that Armstrong should just be an entertainer, and had no standing to speak on social issues. Armstrong found this personally painful, and he didn’t make a habit of commenting on other civil rights issues. Still, the fact that he spoke out may have pushed Eisenhower to send the National Guard to Arkansas. Armstrong’s stand was an important moment, and the documentary gives it its due.

That due might resonate more, though, if Jenkins wasn’t so focused throughout on selling us Armstrong as a benign, virtuous presence. Fewer voice-overs praising him, and more actual information about his career would’ve been appreciated. Armstrong’s smiling image was important to him. I wish this documentary had been less interested in preserving that, though, and more focused on helping us understand the totality of a titanic artist and a fascinating man.