He was a presence in Baltimore, owning WEBB and the Motor Inn. 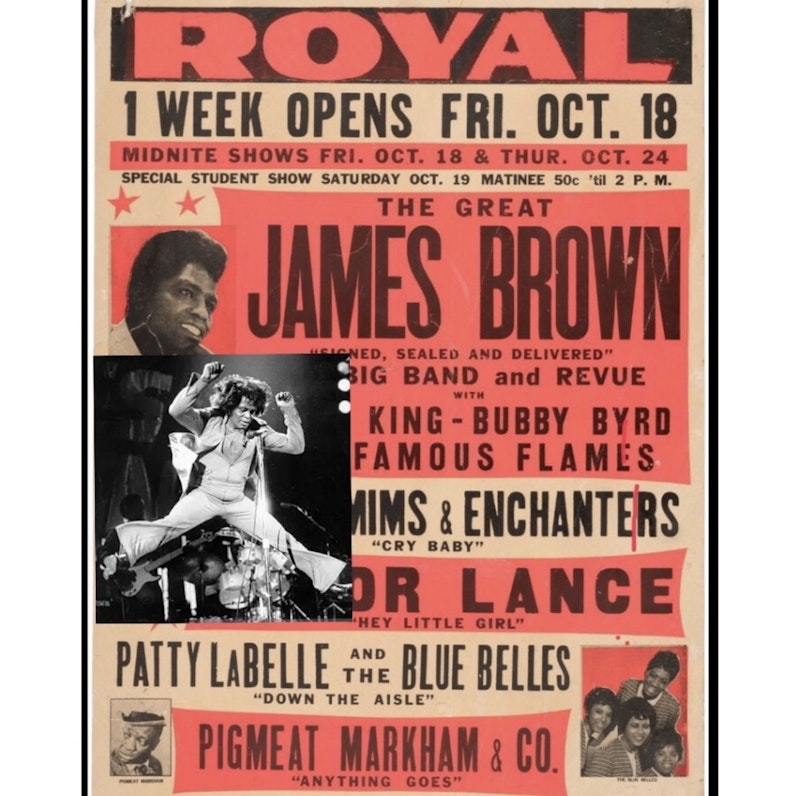 The first time I heard James Brown scream, “I feel good!” on the transistor, I knew was something was happening. Not only in the little bedroom I shared with my brother in our Baltimore rowhouse, but in the bigger picture. Brown made an indelible impression of what was going down in the 1960s. It started with the vocal styling of Brown and his backing band, the Famous Flames. He was like astrange alien creature who made people forget about inequality and poverty, breaking the color barrier, only to become one of the coolest of the in crowd. I couldn’t dance, so I sang along.

Brown was the epitome of funkified hipster cool. A one-man demolition crew of cold sweat, hot fever, before funk.Brown’s career, along with its counterbalance of rock ‘n’roll, began the year I was born. Starting with hits like “Please Please Please” and “Try Me” in 1956, he was already on his way to becoming The Godfather of Soul and the undisputed Hardest Working Man In Show Business. One of a kind, breaking the mold and blasting off.

In his rare orbit, Brown made a new sound that would inspire others such as Parliament, Funkadelic, BootsyCollins and George Clinton. There were also imposters to the crown, and charlatans of copycat music for decades to follow. Forget the phony stuff like Michael Jackson’s moonwalking, crotch-grabbing, sissy screams. Don’t worry about Elvis shaking his pelvis, or Mayo Pat Boone’s version of Little Richard's “Tutti Frutti.” Brown was a cut above, a man’s man in a macho sex machine scene.

James Brown, the black man who could, and did, a media sensation of the 1960s before media was social. He became a major part of Baltimore's black history, performing and recording a live album at the Royal Theater on the strip of Pennsylvania Ave.’s premiere venue for live acts, which also doubled as a movie playhouse. Recorded Live at The Royal, the pic poster above was produced at Baltimore’s Globe Printing Company. These posters were plastered everywhere in the heyday of live music around town. Along with a latter photo of Mr. Dynamite, as he was nicknamed, doing a split in midair.

His pyrotechnic gymnast acrobatic antics performed all over proscenium stages from Harlem’s Apollo Theater to Baltimore’s originally black-owned Royal. Mr. Showmanship made women of all ages everywhere swoon, weak in the knees, and men envy his machismo, exuberance and sexual prowess. No surprise, not everyone loved this dynamic entertainer.

There was jealous resentment, anger, and bitter hatred from white communities around the country. The nerve of this uppity commoner jumping around and screaming like he owns the key to every city he performs. Seducing our pure white women and corrupting innocent white youth who loved his provocative rhythms, primal beats and sexually suggestive race music. Baltimore was never immune to prejudice and at the same time the civil rights movement was growing stronger, racial tensions ran rampant. Brown owned the all-black WEBB radio station and also opened the James Brown Motor Inn, located at the intersection of Franklin and Paca Sts. He married a Baltimore gal too, so his roots were deep. The Baltimore Civic Center was the big auditorium venue in town, and the only place for traveling big name acts to perform.

The City Council banned rock acts, citing violence in the streets, and Brown was not immune. He got around this edict by calling his show a gospel act. The government gave him a hard time and made it all but impossible to own property and perform. He was arrested on tax charges, harassed, and forced to sell his businesses and property around town. The nerve of a black man owning anything. After the murder of Dr. King, when cities erupted in riots, civic leaders begged Brown to speak out against the uprising and quell the violent protests, but the city burned anyway.

It was far too late to turn the other cheek. Songs like “Say It Loud, I’m Black & I’m Proud,” and “Stay in School” were positive messages in a negative culture of anti-everything black that wasn’t sanctioned by white society. Brown recorded a holiday album titled Santa Claus Goes Straight To The Ghetto. Brown's amazing career skyrocketed across the continents to international acclaim, fame and fortune. Displaying his unique brand of music for all the world to love, through his personal trial and tribulations, he always kept his cool, with style, humor, dignity, and an unwavering sense of justice.