They put the fun in funk. 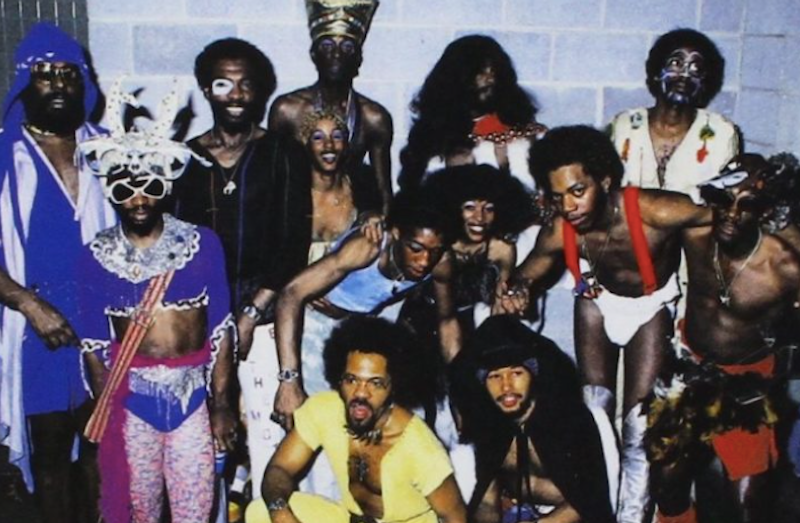 If James Brown is the undisputed Godfather of Soul, he passed the funky torch to George Clinton, The Father of Funk. It all got funkified over a half century ago. Parliament Funkadelic aka P–Funk, or the P–Funk All–Stars, hit the music scene in 1968. Straight out of Plainfield, New Jersey, George Clinton left his doo-wop roots back in the 1950s with the original group Parliament, (named after the cigarette). In the smoky haze of singing choreographed syncopated fancy footwork, a la The Temptations, donning matching suits to become Doctor Funkenstein, the undisputed King of Funk. Supreme commander of the Mothership. Like Sun Ra and his Intergalactic Arkestra, he combined jazz, soul, psychedelic rock, avant-electronics and gospel choirs. Bringing the religion of sci-fi Afro futurism’s warm fuzzy wholesome funkiness to the masses. Outlandish costumes and theatrical props enhanced the spaced-out sounds, reaching the pinnacle of the freshest, funkiest musical experience ever conceived. They put the fun in funk.

Who among the LSD-initiated could forget the hypnotic anthem to spiritual birth/death of 1971’s “Maggot Brain,” seared into the eardrums of their gray matter. My first listening experience was a psychedelic trip that played over repeatedly throughout my life in a series of vivid flashbacks. Those unmistakable opening guitar riffs, the undulating echoes, always take me back to that first acid journey. It was like Jimi Hendrix meets god on a UFO, and they all go to heaven on earth. “Maggot Brain” was forever, only a 10-minute recording that’s outlasted every decade since its release. Miles Davis and Sly Stone couldn’t keep up with George Clinton, who left Berry Gordy in the Detroit dust of Motown's mediocre mainstream melodies.

Funkadelic inspired the Brit white-boy bands too. David Bowie and Led Zeppelin, among others. Today's hip-hop bands sample The P–Funk sound. Their influence goes on throughout genres of sound, from Prince to the Red Hot Chili Peppers and the long list who lay claim under the funkamental influence. Grand Masterflash and the Furious Five, Run DMC and Rick James, made no bones about using sampling from P-Funk and James Brown’s Famous Flames. Bootsy Collin's Rubber Band was integral in the shaping of George Clinton’s dream team. Borrowing from, or hijacking James Brown’s entire horn section jumping ship to join up with Dr. Funkenstein. Right with bassist Bootsy Collins' prominent bass beat sounds, comedic lyrics, and flamboyant costumes it all came together, sculpting the infamous Funkadelicious revolution.

It was a logical progression, backing up James Brown, to getting in the organic groove with George Clinton's funky celestial world party. Even the female backup singers for Sly & the Family Stone eventually joined in with the band. Clinton produced a musical monster and it was only natural to have the Brides of Funkenstein added to the funky fray. At its peak during live performance shows, a massive 40-plus crew of musicians and singers of the P–Funk groove, filled stages around the world.

In 1994, HBO released a science fiction trilogy under the title Cosmic Slop, over two decades after the original album's release. It was narrated by Clinton, portrayed as a floating head with a prosthetic third eye. His intro begins, “You are standing on the verge of getting it on. Beyond the Twilight Zone, further than the Outer Limits. Deep, deeper than deep, in the black hole. Free your mind and your ass will follow, cuz' once you pass the point of no return, you’re caught in the cosmic slop.” The intro to the first tale, “Space Traders,” is right out of The Twilight Zone canon except in this story plot, the space aliens visit earth with a promise of advanced technology and riches beyond humankind’s wildest dreams. The only catch is they must turn over every single black person in the USA whose melanin levels are higher than the shade of a brown paper bag. Jordan Peele’s remake of The Twilight Zone can’t touch this absurd, surreal parody.

Given only one week to meet the alien's offer, the white powers vote unanimously, agreeing to the crazy deal. The next day, the Statue of Liberty is transformed into a solid gold figure and the process of extradition Shanghaiing black folks goes under way as scheduled. Promises were made to certain high-ranking black officials and their families in the government to be spared and whisked to England to save them from this alien plight of flight to who knows where. But the empty promises and alternative plans were never kept. The entire black population is rounded up by the military and bussed in school busses like the early days of integration to intergalactic UFO deportation sites, where they’re sucked up by laser beams into the spaceships. It’s eerily relevant today that this black sci-fi horror story written by Derrick Bell is so compelling. Bell is also the author who wrote the definitive book on Critical Race Theory. The very treatise that ultra-conservatives and white supremacists are attempting to silence.