Hot Winter by Scroll Downers is a viscerally exciting and focused debut. 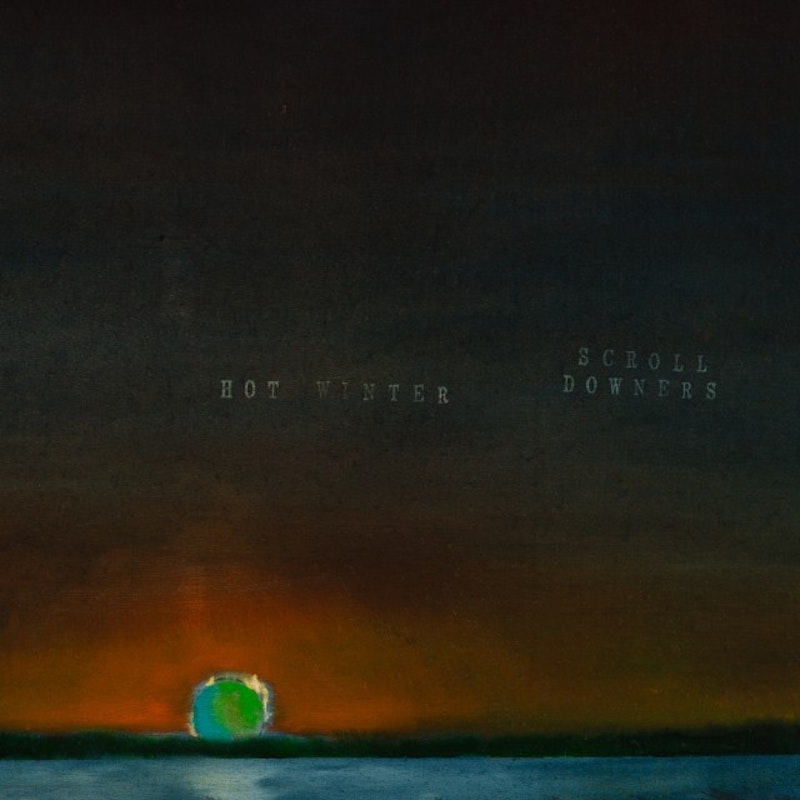 After eight years, Baltimore’s Dope Body ended their run abruptly this past spring with two shows in town at the Metro Gallery and Floristree, announced just a couple of weeks in advance. They left behind four LPs, a handful of singles and cassettes, and a strange reputation as “Baltimore’s nu-metal band.” I heard that a lot in the last four years, ever since their second full-length record Natural History came out. I never saw it—it was a tag that felt desperate and superficial, something based on their look or guitar tone. So silly. Dope Body was indebted to classic rock more than anything, and after the noisier 20 Pound Brick and Nupping, that’s where they landed for a while, before ending on a twisted note with Kunk, their last and best album. It reminds me the most of 20 Pound Brick and their early shows as a three-piece: Zachary Utz on bass, David Jacober on drums, and Andrew Laumann singing (John Jones later joined on bass, and Utz switched to guitar).

That era of the band invited automatic comparisons to the only other drums/bass/vox band in Baltimore, Double Dagger, who were always funnier and more jubilant. Dope Body was just as powerful but much darker and intense, with an equally impressive arsenal of hooks. The members have moved on quickly: Laumann continues his career as a visual artist, Jones has an excellent new LP under the name Nerftoss called Maiden Powers (Ehse Records), and Utz and Jacober have started a new band with Lexie Mountain singing called Scroll Downers. Their debut LP Hot Winter is out now, also on Ehse.

Classic rock riffs and sensibilities pop up once again. Jacober and Utz are two of the best players in Baltimore, and Utz is one of the best guitar players in Baltimore, both a consummate shredder and a skilled deconstructionist—as soon as he switched to the guitar in Dope Body, he brought along a whole army of pedals, loopers, and software. To me, it was always a marriage of finely sculpted texture and raw riffing. Hot Winter continues this, with Utz utilizing familiar and somewhat rote rock chord progressions but elevating them with a detailed take on production and tone, sort of like a heavy metal Lindsey Buckingham. The arrangement and layers upon layers of guitars on songs like “I Want to Believe” and “Runnin N Bossin” remind me of Mirage-era Fleetwood Mac, a wall of sound that isn’t made up of double and triple tracks of the same thing. Dozens of discrete elements, that might mean nothing on their own, add up to this glorious Frankenstein sound that elevates a lot of otherwise boring riffs.

But it’s Lexie Mountain’s singing that makes Hot Winter soar. I don’t think I’ve ever heard her sing like this before—she just fucking wails, an extraordinary voice and delivery somewhere between Poly Styrene and Grace Slick. The first two songs “Two Clowns” and “Shake Off the Rays” knocked me out, the sort of straight-ahead Rock Power that puts them in a weird spot—too heavy for the Pavement clones, not heavy enough for the patch collectors. Scroll Downers, despite the brilliant and topical name, are a band out of time: they should be opening up for Hawkwind, touring arenas across America. “Shake Off the Rays” especially reminds me of Jefferson Airplane, the way Mountain bellows over pounding drums and a wall of guitars. The closest thing in time I can think of are At the Drive-In and Bear Vs. Shark, bands lumped in as “post-hardcore,” another lazy and superficial tag. Hot Winter is a righteous blast, cathartic and intense, not fun. Fuck fun: I’d rather have this kind of visceral intensity and focus than more DeMarco-descended college rock fetishists.