Rhythm Is a Dancer 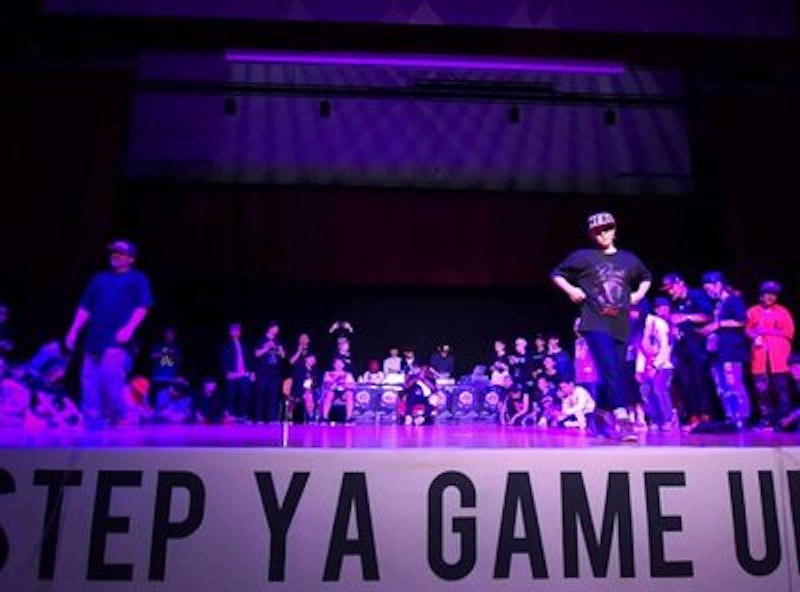 I was invited to WeWork Times Square for a roundtable on collaboration. Prior to the dinner, I stood with colleagues, young dance educators, at the beer tap. Someone brought up the weekend’s street dance battle, Step Ya Game Up, to which they all were headed. Melanie was competing. “I’ve never been to a battle,” I announced. Shocked eyes turned to me. Then my friend Kelli, a program director whom I help with grants, said, “You should come. You could volunteer or buy a ticket.” I went to the beach Saturday, so I missed the first day. Sunday I rode the subway with my girlfriend to Chelsea. She dropped me off at the club’s door. I walked into a dark, packed ballroom with two bars, a dance floor, couches, and a large, illuminated stage.

People of all ages, races, genders and ethnicities were preening and practicing moves to a reverberating stream of hip-hop and pop, with soul, house and funk thrown in for good measure. Kelli hugged me and told me to enjoy myself. She had to run. She was working backstage with a clipboard, allowing “top 8” competitors to sign up for the various categories: hip-hop, popping, locking, waacking, house and all styles. I observed a spotlighted circle of five- to 13-year-old boys and girls who were already battling it out, waving arms at each other and flashing signs before dropping to the floor to spin and kick legs into the air. Little guys and a girl with a backwards hat and graffiti shirt were b-boying impressive feats to the music. A cute kid in a sock hat, who looked like Conan O’Brien, wouldn’t give it up. He kept strutting and dropping to the floor to twist like a tornado. A teenage girl flopped like a seal, while two twins with stylish Afros and their buddy stole the show with polished foot- and hand-work. They reminded me of the Jackson 5. Outside of this pit, high schoolers and college kids, some in vests, shades and fedoras, ran through technique or shared a groove. They were like Olympic gymnasts who tirelessly prepare until the competition. Tall dancers behind me in the shadows flexed, stretched and fanned hidden flames. I lost my inhibitions and did a weak dance, stiff and awkward, but I was observant enough to learn a few tricks.

Then the hosts, Cebo and Steven Ding, took mics and shouted for action on the stage. Cebo’s throat was raw and his voice hoarse from cheering and mc’ing the first day; Cebo and the judges joked about it, and his daughter brought him a lemon. Three DJs manned laptops and turntables, and like stage-right sorcerers, they spellbound dancers and the crowd with big beats and breaks. Well-timed sound effects reinforced the humor of the hosts or intensified the gladiatorial arrivals. Before the first bout, a touching video and moment of silence remembered a master teacher, a woman in the house community who died of cancer. I won’t describe the kids’ battle because it was exactly what I had witnessed in the pit.

Cebo next introduced the house category by calling attention to the genre’s reliance on footwork. The representative house, an electronic dance music I generally love, pulsed with the faded magic of a dated future: synth bass and drum machines, monotonous like manufacturing jobs and early robots, animated the dancers’ steering arms and frantic feet—happy hi-hats on the off-beat. The winners, fiery and locomotive, could blur their shoes like Sonic the Hedgehog on a sprint. They kept backbones sturdy and twirled to much applause. The champions constrained swerving knees and hopping feet to a tick-tock technicality, while their torsos floated effortlessly on cloud nine. I should mention that within each “top 8” (sometimes having 11 dancers) contestants battled in brackets of two, three and sometimes four. They took turns, each dancing a minute in the same song, jumping in at the breaks. There were opportunities to get in each other’s faces, issue disses, and fire up the mob with a snap or flick of the wrist.

A clean-cut man who danced with the Electric Boogaloos on “Soul Train,” the legend Poppin’ Pete sat in the throne to judge disciples of “popping,” a jolting, jerking style that vibes on funk. My favorite dancers, many of whom won, popped with such ferocity that I could see the fat in their cheeks and arms jiggle, and not many were big people. I thought, liquid, solid, liquid. It was rapid, rhythmic stopping and starting of heads, necks, arms, spines and legs. I admired all the pretend collapses of dancers who never fell. One popper in a hat looked like a scarecrow drooping then rising alert again, or a Chuck E. Cheese’s animatronic jiving in fits as some devilish kid pulled the plug in and out of the socket. When a young woman in a leather jacket and spandex won a bracket, Steven got on the mic to announce, “There’s nothing sexier than a woman popping!” Two bigger guys were entertaining pros, and their battle extended to a tiebreaker.

When Cebo said waacking would be next, I didn’t want to be an ignorant fool. I got my phone out and Googled it. I was excited because waacking promised flamboyant freedom of expression—an arms-centric style coming from L.A.’s LGBT clubs of the disco area. Musically, this portion of the program was right up my alley with remixes of Madonna and the Talking Heads. But the most impressive feature, aside from the martial movement, was the elaborate costuming: women (both cis and trans) donned flamenco dresses, saris, pantsuits, head scarves, fishnets, leotards, roses, feathers and top hats. Each competitor was a beauty. Something about the inspired flailing of arms before and behind the head suggested an urgent struggle to purify mind and body. Desperately rushing to and from the other in the battle, like a diva about to slap the shit out of somebody, waackers treated the stage like a self-defense workshop, a crime scene, or a messy breakup. I followed the hip swishes and squeezing thighs, the abrupt turns and high-heeled, defiant parades. Melanie won a tiebreaker against the category’s lone, theatrical man, a guy whose prior arm wrangling at the bar had made no sense to me.

The hip-hop category was male-dominated, but that didn’t stop a brave 12-year-old girl from jumping in the fray. Hip-hop provided a jewel of entertainment in the form of dangerous duels. The movements were muscular and lyrical. Dancers built up energy in crisscrossing legs before giving in to a breaking point that found them on their hands, flipping madly and kicking firecrackers above their heads. Intense guys knocked the hats right off their heads, and for flair some pulled triggers. A theater of inner-city life, hip-hop offers a generative cultural language, music, style and moves unrivalled in their universal appeal.

“All styles” brought dancers out of comfort zones. They had to dance the style that fit the music, and they didn’t know what was coming. The masterful Rice Bowl, a guy who won brackets in multiple styles went head to head in a dancehall battle with Cebo’s daughter. Another strong dancer Hurricane and two macho hip-hop dancers chuckled and grinned when they found themselves waacking for the prize. They played it up dramatically like they were on “RuPaul’s Drag Race.” Locking was the last style I watched before I left. Its choreographic innovation felt like a companion to popping. Suga Pop was judging. Arms and legs locked into repetitive grooves. The brackets played out like a video of mimes in fast-forward. The jamming bodywork was occasionally broken by still poses as the music pushed on. Then the dancers would bolt back to life, finding another combination with which to electrify the audience. I laughed when Steven screamed, “Nooice”—like the Key & Peele skit. I left after this battle. What a time!