The Fragile Genius of Rivers Cuomo 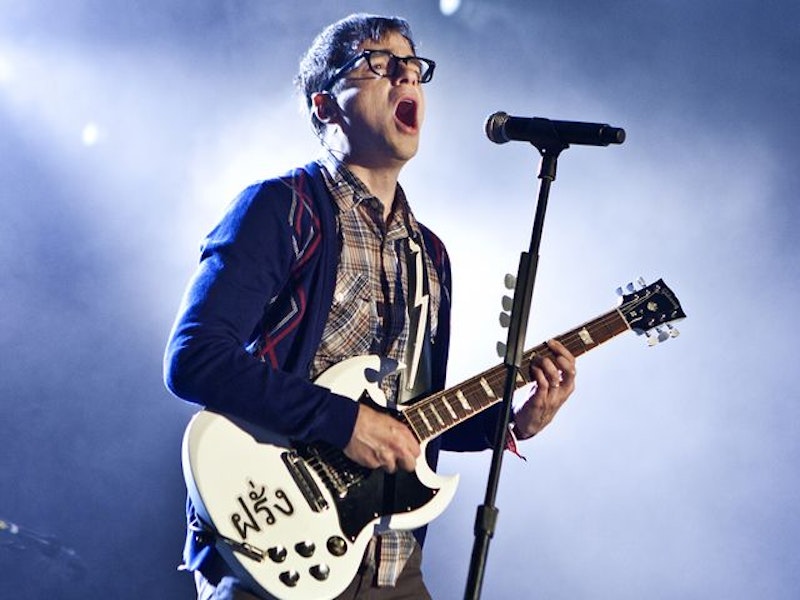 When Rivers Cuomo formed Weezer in 1992 it could have been a non-event, another band born into the expanding alternative music bubble. But fortune would see their tale develop differently. By 1994 the ex-metalhead had perfected the art of the alternative pop song. The video for "Buddy Holly" played so frequently on MTV that one had trouble believing Weezer was never really the house band on Happy Days. Every song on their debut album was a hit. This would prove to be both a boon and a bane for Cuomo. It led to a meteoric rise for his band. Throngs of non-musical nerds felt empowered to pick up guitars. Cuomo had come through in a very real way; he was authentic. However, this rise also put pressure on Cuomo for more music.

This Blue period is usually referenced in the press as the time surrounding their followup album. The degree to which Pinkerton was critically panned led the media-shy Cuomo to comment years later that the album was nothing less than a regrettable moment which he found impossible to forget. He had squandered a moment that should have secured his status as a pop genius. This is key in understanding the rise of the cult of Rivers Cuomo. It's commonly argued that his story during the 90s fits the mold of the misunderstood genius. But his story is far richer. It is the tale of an egomaniac with a rare gift for the micro-management needed to grease the wheels of his own self-prophesy.

During their formative years Weezer was being chronicled by their de facto band historian and later webmaster Karl Koch. By Pinkerton's release in '96, you could surf your dialup connection over to the band's web page. In addition to the usual updates and tour information there existed a gear history. Info could be found on what guitar cab a band member had used to get a specific distortion tone on a track or demo (even the details of the instrument's purchase were included). Reading through this section was akin to reading through Iron Maiden's twenty-year gig history. Weezer had only released twenty songs by this point.

Though the band would soon go on a five year hiatus their website's forum remained active; in fact, it was so active that when Cuomo emerged from self-exile in 2001 to release their self-titled "Green Album," fans defected from the main website to form their own posting board. Cuomo himself took the next logical step and began posting for a time on the Rivers Correspondence Board. During his down time he had apparently been active. While he revealed few clues about his personality in interviews or live performances, the RCB was him at his most transparent. In addition to cataloging his own massive library of songs, he had also amassed a collection of schedules, Harvard essays, and personal records, all of which he shared with board members. One personal essay, titled "A Mad and Furious Master," is an uncompromising, and difficult, read in its description of how sex obsession had led him to celibacy. Its hard to picture the same guy who wrote "Buddy Holly" in a foreign country, post-show, hunting for massage parlors with thousands of dollars crammed into his pockets. It was an avoidable anectode, yet Cuomo seemingly could only reach private closure through public overshare.

This confessional rapport with fans is unique in its own way. Cuomo prefigures the archetypal YouTube star. Had the internet existed during the eighties, it's easy to imagine a teenage Rivers Cuomo videoing countless demos in the hopes of scoring a record deal. In a way, this is exactly what he's done with Weezer post-2001. In an attempt to avoid another Pinkerton, Cuomo leaked the demos to what would become their next album, the fan-titled Maladroit. More recently, Cuomo has used the streaming website UStream to share solo peformances of demos live from various venue green rooms.

As Weezer has gone through a critical reinvention in recent years, they've also alienated the majority of their original fans. While his Alone demos have attempted to reignite some nostalgia, it feels more than a little too late. It'll be interesting to see what new fans will make of their beloved frontman's past antics. It's easy to believe that they'll be willing to romanticize the smallest details in an attempt to reconstruct an unattainable past. How can such a past be avoided when Cuomo has done so much over his career to document it? There's a bit of revisionism to his methods. History will remember him as the prolific leader of a commercially successful band. But if I knew early on that my fandom would contribute to the stoking of Rivers Cuomo fragile ego, I would have thought twice about the price of admission.