On Andrew Brenner and The 49 Americans. 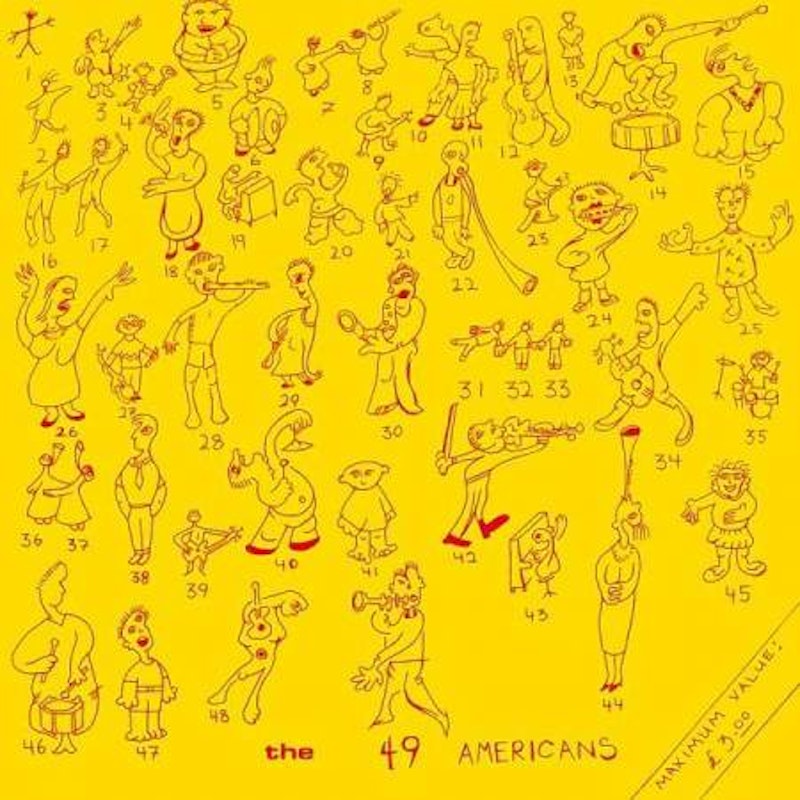 "Happy music doesn't have to be dumb " Andrew Brenner shouts on "It's Time," the mantra of his avant-pop supergroup The 49 Americans. The band’s LP, We Know Nonsense, is being reissued next month by Staubgold, with an additional 23 bonus tracks spanning the group's short career. The 49 Americans have a lot in common with Simon Jeffes and his Penguin Cafe Orchestra: a revolving door of trained and technically versed experimental musicians, led by a sole instigator, whose vision and personality are what define the music the ensemble makes. The music of the Penguin Cafe is whimsical, aloof, slightly melancholy, and full of fantasy—the songs on Penguin Cafe Orchestra and Music from the Penguin Cafe were written to exist in a different space than our own. Even when a rare vocal performance pops up, as on "In a Sydney Motel," the voices sound as if out of a Lewis Carroll story, just as the way the drums, bass, strings, and piano are mixed manages to summon its own rarefied air.

Superficially, the songs on We Know Nonsense sound similar to Jeffes' work: sparse arrangements, lots of space between instruments in the mix, extraordinarily dry production, and an inviting if strange sense of melody. On "Tendency to Lie," Brenner sings "This is not heaven, so how should I behave?" over gently brushed drums, and a pair of vibrating tremolo guitars. It's an eerie precursor to the sound of Angelo Badalamenti's Twin Peaks soundtrack work: doo wop, blues, and 1950s pop standards done in a way that appears very straightforward and stripped down at first, but that belies a menacing, hidden anxiety that never totally rears its head, adding to the doom of some of these songs. Happy music doesn't have to be dumb, but it's rarely made without an undercurrent of menace.

It's not even in the lyrics. Brenner's words stick to the mantra: optimistic, willfully naive, full of childish energy but without the arrogance of little kids. "Beat Up Russians" could've been on the first Talking Heads record, or something by the B-52's, judging just by the boogie-woogie bassline, but the most prominent part in the mix is an abrasive percussion part that sounds like a dull, tuneless steel drum. But instead of coming off as sloppy or absurd, the timbre and harmonics of whatever is being banged give the song something a simple rock standard could never convey.

This is the central appeal of The 49 Americans and Penguin Cafe Orchestra: it's a whole lot of fun listening to expert musicians essentially "goofing off" and employing their skills to make light-hearted pop songs instead of some staid classical piece. They manage to combine the immediacy and universality of a good, catchy song, with the world-weariness and sophistication of people who spend their days, weeks, and years doing little by listening to and playing music. Anything you love, you'll get sick of it eventually, really sick, and groups like The 49 Americans need to exist on the margins, as panacea for believers in great songs, who've heard it all before.