The Early Psychedelics of "Deep Purple" 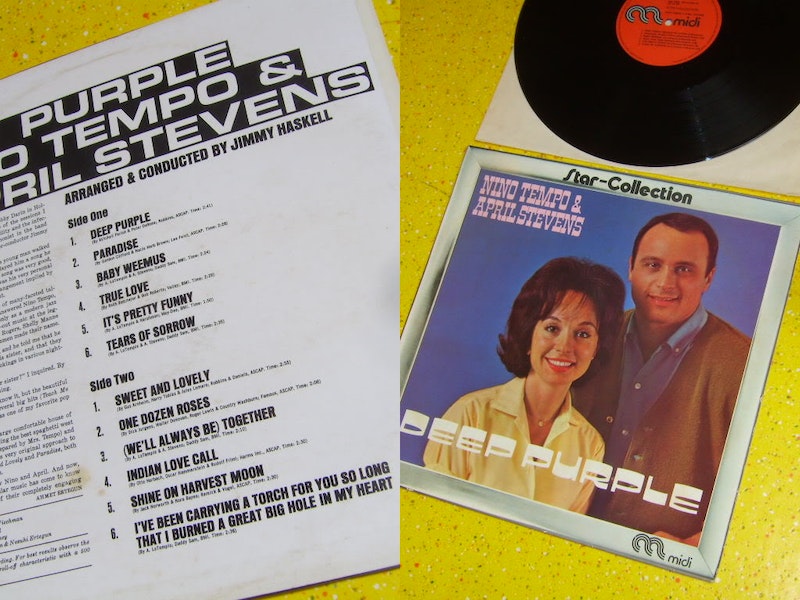 Some of the most cataclysmic events of the 20th century occured in 1963. President John F. Kennedy was assassinated and The Beatles had a wildly successful U.S. radio debut. Academia's hallowed halls were aglow with the metaphysical emanations of Doctor Timothy Leary and Professor Alan Watts. At the same time, Marshall McLuhan was putting the finishing touches on his groundbreaking work Understanding Media—just as his book The Guttenberg Galaxy had become required reading for mass com scholars. Helen Gurly Brown's sex positive/proto-feminist bible Sex And The Single Girl had just been published, while the echo of Martin Luther King Jr.'s 'I Have A Dream Speech' was shattering the foundations of American racism and LBJ was preparing to drive the U.S. military deeper into the Vietnam conflict.

Through it all, pop fans were singing along to an eccentric 40-year-old standard called "Deep Purple" that'd been spruced up by the brother/sister duo Nino Tempo & April Stevens. This version of "Deep Purple" was released on Atlantic Records in November of 1963 and went on to become a Grammy Award winning number one smash. Though fondly remembered as one of the catchiest hits of the 60s, the song also played an interesting role in the development of psychedelic music and culture.

"Deep Purple" began life as a piano piece written in 1923 by Pete DeRose, with lyrics and a vocal line added more than a decade later by Tin Pan Alley composer Mitchell Parrish. From there its history is long and convoluted, but it's easy to see how Parrish's lyrics alone helped to make this an early classic of psychedelia:

When the deep purple falls over sleepy garden walls
And the stars begin to twinkle in the night
In the mist of a memory you wander on back to me
Breathing my name with a sigh
In the still of the night once again I hold you tight
Though you're gone, your love lives on when moonlight beams
And as long as my heart will beat, sweet lover we'll always meet
Here in my deep purple dreams...

References to an enchanted garden and a dreamy moonlit night anticipate the poetic ambitions of David Crosby, Donovan, and even Joni Mitchell's plea, "we've got to get ourselves back to the garden."

The concept of updating pre-World War II music for the rock 'n' roll era was also a signal of hippier things to come. Only a few years after the release of "Deep Purple," long haired folk rock bands like The Lovin' Spoonful and Notes From The Underground would unleash their own dayglo re-inventions of Tin Pan Alley. This ultimately paved the way for the U.K. psych scene's full blown 20's pop revival which reached its apotheosis via "Winchester Cathedral" by The New Vaudeville Band and Beatles hits like "When I'm Sixty-Four" and "Honey Pie." More importantly, just like those neo-flapper tunes, "Deep Purple" displays how nostalgia can be used as an element of compostion. The song's power comes not just from Tempo & Stevens' mastery of anachronistic pop and early 60's rock, but also from their ability to understand how idealized impressions of the past can charge music with a loaded context.

Nino Tempo & April Stevens' hit doesn't stand out merely because it's a fresh re-arrangement of an old song. At its core, the nature of the psychedelic philosophy deals with a weird experience enjoyed primarily by the mind and soul. In "Deep Purple," illusory words and propulsive yet sublime melodies combine to whisk the listener away into another dimension ruled by "deep purple dreams" and "the mist of a memory," just the kind of arcana that would also spur The Grateful Dead, Fairport Convention, and many other psych rock explorers to embark on the "long strange trip" through the pre-WWII folkloric nether regions.

So who were Nino Tempo & April Stevens? How could they play an important part in the genesis of 60's counter culture without any direct connection to the underground? This is perhaps the most intriguing and serendipitous part of the "Deep Purple" story. Nino Tempo was an acolyte of Phil Spector and a saxophone player with the world famous group of L.A. session musicians known as the Wrecking Crew who also included Hal Blaine, Glen Campbell, Carol Kaye, and Jack Nitzsche among others. It's hard to determine how much these innovative artists shaped the young sax player's work, but they must've opened his mind to at least a few adventurous ideas as Nino Tempo's 50's/pre-Wrecking Crew recordings were sedate jazz and straight pop tracks quite unlike the highly original song that'd make him famous.

Though most of her early output fell into the easy listening category, April Stevens' sultry lyrical recitation gave "Deep Purple" its most outre touch. This was originally done to help Tempo in memorizing the words while recording the demo version of the tune, but Atlantic Records head Ahmet Ertegun thought it was "cute" and insisted that the spoken word passage be left in the finished version. In the 40's and early 50's, Ertegun was a supporter of experimental jazz and rock'n'roll at a time when both genres were little known outside of niche audiences, so there can be no doubt that his vision helped to make "Deep Purple" a prequel to psychedelia.

The trippy hit created by Nino Tempo & April Stevens could only have emerged from a culture bursting at the seams. Even if it isn't comparable to iconic works like Dylan's Highway 61 Revisited or Godard's Breathless, "Deep Purple" bears a mark of immediacy that's wholly unique in the annals of 60's pop.