We Have T-Shirts in the Back

A few moments from Raindeer’s tour of the Midwest and the East Coast. 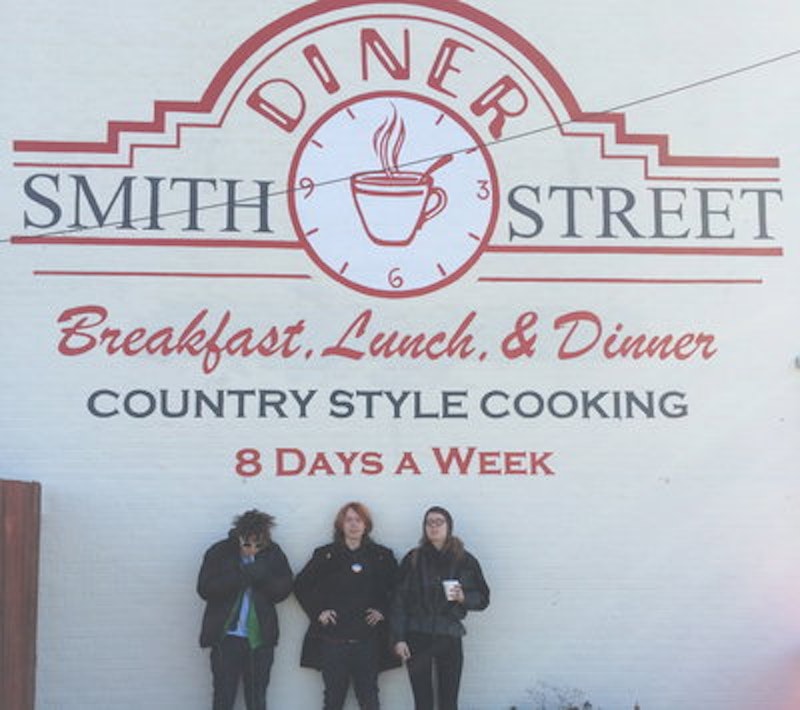 All you can hope for on a tour you booked yourself is to make enough money to eat and make it to the next city without burning through it. Raindeer, the band I play with, was well-received everywhere we went. In between the shows, the rest stops, and the hours to kill in coffee shops and cold sidewalks, there were a few bizarre moments, spread out over a trip that felt refreshingly efficient and routine.

Saturday, January 18: I get terrified at the start of a trip longer than a few days, and I’m bummed I can’t enjoy myself at the very beginning, because it would’ve been fine toward the end when you get in a rhythm eager to be in a different bar or house in a different city every 12 hours. It makes socializing a lot easier and more fun. The first show is a packed basement in a party house near Richmond’s Virginia Commonwealth University with a mud floor that starts turning into nasty beer-infused Play-Doh by the end of the night. A show where people are breathing and burping down your neck, bumping into each other and spilling shit and knocking cables out, announcing how many beers they’ve had and which party they’re going to next. The openers are wearing cowboy hats and tripping, sounding like if you cut the gears on Suicide. The PA was a bass amp but I thought we sounded good, rough and rollicking, and the crowd was really into it, and at one point it seemed like the whole room was swaying left and right, under our control.

Sunday, January 19: We get to the venue in Virginia Beach (a shack called That’s How I Beat Shaq) four hours early. Before we could find something to do, an old woman in a bright red dress comes ambling down the deserted sidewalk looking vacant and dazed, in a wide-eyed trance. She walks up and asks if there’s a man in the car, “a little girl” fell in her house and she can’t pick her up. We follow her into the house, where her husband is lying on his back in their bedroom. He’s a vet wearing his jacket and medals. Meanwhile, the woman in the red dress keeps saying, “She fell, she can’t get up, I can’t pick her up.” We helped the man up onto two feet and into his bed, and he heaves, breathes, and laughs a little, and looks right in my eyes and says, “Getting old is hell.”

Monday, January 20: The last act drowns the bar in noxious fog machine spizz and treats the sound guy like shit, complaining about her mic feeding back while she stands directly in front of the speaker. The VCU kids stay choking through to the bitter end after a punishing 45-minute set of whining and grinding. By the end of the night my phlegm looks a little purple, and I take too many Sudafed and stay up most of the night, nose cleared and heart racing. Both the locals looked and sounded like Grimes. From here on out, almost every arcade machine in every bar was purely decorative.

Tuesday, January 21: We play a house in Durham, NC and stay up all night listening to Steely Dan and talking about The Larry Sanders Show, getting too sloppy and waking up in a living room with no heat. I find an old paperback on the garage floor, The Answer, a proto-Less Than Zero that makes me cringe with embarrassment at every lame complaint and lazy piece of hate the narrator drips off his cooler than cool tongue, reminding me of all the worst parts of being a naive young man. I keep it for further review.

Wednesday, January 22: Our car dies on an uphill onramp on a busy highway before we can get it up onto the median. We’re freaking out, standing at the mouth of a sharp turn. One of us stays behind so the rest can make the show packed in one car. No one says a word during the ride, except when the three of us in the back sang along to the radio spontaneously. We play at a pizza place/bar in a town that everyone says they want to get out of and insist there’s nothing worth doing the next day, but I have my doubts. No one locks their doors.

Thursday, January 23: The last of three shows with the amazing Lollipops, a great band from Raleigh who played at my house in Baltimore earlier this year. Complete power pop with teeth, a tight, magnetic band that we were all really happy and proud to play with. We finally score some more pot after running dangerously low halfway through. Talk of an impending blizzard in Ohio briefly suggests going back to Baltimore for two days and continuing with the last three shows, but we eventually agree that’s a cop-out, especially now that we have weed.

Friday, January 24: Cincinnati is so much cooler-looking than the strip mall sprawl of the limited parts of North Carolina we saw. The mood in the bar is a bit mean, but the owner is nice, even if he is really parsimonious by giving us our money and getting people to pay the cover. We have nowhere to stay as of two a.m., until one of us asks the last band if we can crash at their place. We follow them in a 40-minute white knuckle caravan in the snow, stopping at White Castle and smoking at their place, with couches and a warm room, sleeping in bong water and cig butts is welcomed over the gorgeously inconvenient snow outside.

Sunday, January 26: I’m almost positive someone at one of the venues in the Midwest stole our acoustic guitar. Our deductions are solid and I can’t go into details, because I’m afraid the coked-out owner of the place is going to machete me in my sleep. While delivering our guarantee at the end of the night, he appears for the first time and apologizes for the non-turnout, going on about the hicks who drink like fish and throw ice at the bands, then into how George Bush is a scumbag, the geopolitics of the Middle East, and the assassination of Theo Van Gogh. Everyone at this place—a dozen people tops, mostly aging goths and a few kids from the suburbs who were speeding their fucking heads off, going a mile a minute asking me about my siblings, their college education, movies that Chloe Sevigny has been in, a monologue on The Hunger Games. I stepped outside for some fresh 10 degree-air when the kid playing before us said he was most inspired by Dave Matthews and John Mayer. They ended with a “blues jam” that was not a blues jam. A couple of older women, already drunk, came up to me and grabbed my hand and asked me to dance. I did my best to politely decline but just barely missed a slap as they tumbled into the bizarre bar that shall remain nameless because it gave all of us tremors.

The next night in Pittsburgh is encouraging despite our freezing feet. The space is run by volunteers and is completely D.I.Y., with no drinking and a crew of awesome kids running it and going to the shows for the music. There were probably three dozen people there, mostly under 21, having a good time, behaving well and actually talking to each other, without a mammoth bar PA blaring Top 40 so you can’t hear the person next to you. The promoter gets on the mic halfway through the show and announces that Macklemore has won Song of the Year at the Grammys. Loud boos.

Monday, January 27: We are in and out of Manhattan in three hours, playing to an empty room next to a busy bar, drawing in three or four people by the end but we don’t even think about asking for gas money, so we pack up and leave for Philly to stay with our old drummer and his “Satanic” corgi Bill Murray.

Tuesday, January 28: More diners and aimless, frigid wandering around in Philly with no money to spend. We go to a Goodwill and three coffee shops, with little left to say, not out of spite, just sheer boredom. An old friend I hadn’t seen in years comes out and we all have a great time on the back patio burning plastic palm trees during another snowy night. There’s an urgent itch to make the drive back to Baltimore before the storm gets worse. We make it back without a scratch and collapse into our beds, some more sore and distant than others but all of us happy to be home from a successful tour.