The Del Prixs of Glen Burnie

Their song “She’ll Be Mine” presents a rare side of DelMarVa’s lo-fi teen rock with its balance of emotional subtlety and primal two-chord propulsion. 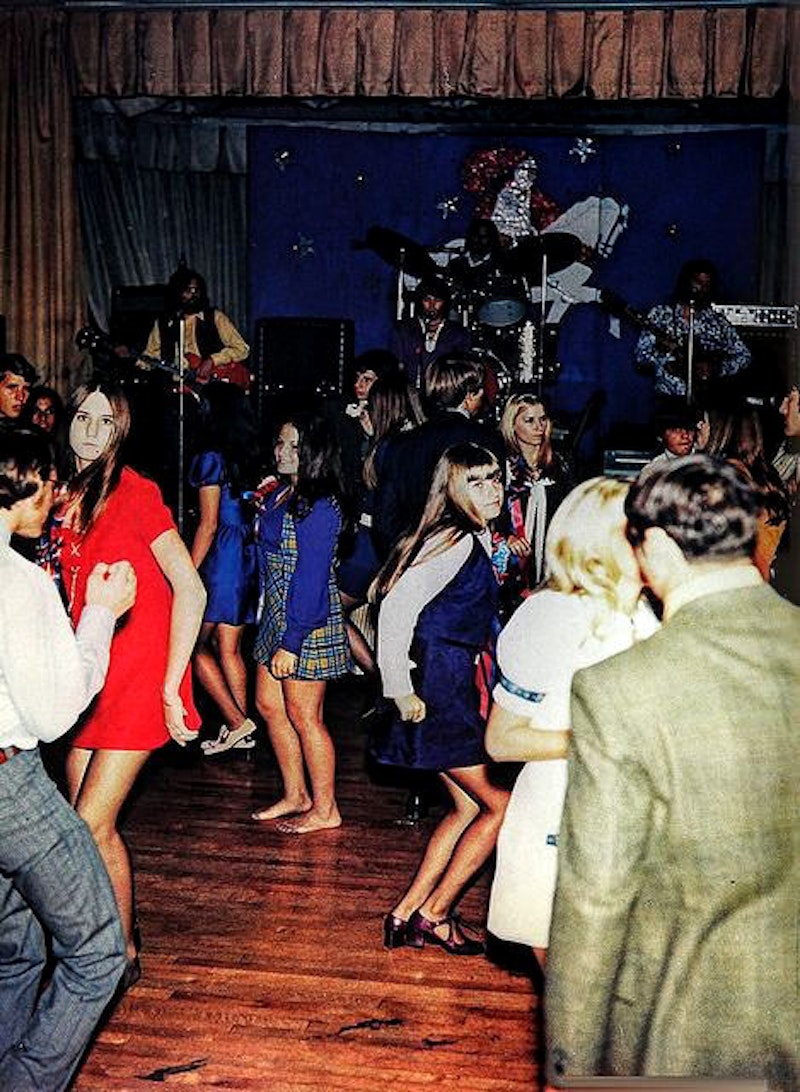 The Del Prixs were a Glen Burnie, MD band who formed in the early-1960s. Their song “She’ll Be Mine” presents a rare side of DelMarVa’s lo-fi teen rock with its balance of emotional subtlety and primal two-chord propulsion. Their lone 1966 track was a high point of the Dome Records album Batlimore's Teen Beat A Go Go. Despite its weird charm, the origins of this song and its creators are cut and dry. “She’ll Be Mine” proves that sometimes great works of obscure art aren’t always made in a fire of unpredictable circumstances.

When recalling their beginnings guitarist Tom Lawrence was clear about the main non-musical influence that inspired The Del Prixs’ formation: “…Bottom line, I don’t care what anybody says, for most of the guys getting into playing it was girls… You get in the band, you get the girls.” Along with girl-crazed fantasies, sometime in late-1963 a shared love for The Ventures, American soul, and British Invasion sounds brought together the 15-year-old Lawrence and his neighborhood pals guitarist Bill Cornell, drummer/singer Mike Youell, and lead vocalist Jimmy Ebler (formerly of fellow Glen Burnie group/Baltimore’s Teen Beat A Go Go alum The Executioners); their friend bassist Wayne Chaney was also along for the ride. Chaney came from the Gambrills area, a few minutes south of Glen Burnie.

Tom Lawrence: “I remember he might’ve got a guitar from a grandfather. It was some old big hollow body guitar with pickup (with) some old amp from the 1950s. It looked like an old radio or something.”

When the band finally started gigging the dusty grandpa gear was traded in for Vox and Fender equipment, preferred brands for most teen rockers of the Brit Invasion era. Initially Del Prixs concerts happened at a local bar called The Terry Inn. Parents had to chaperone the boys when they played for the drinking crowd, but, as word spread of their unique rock ’n’ roll vision, The Del Prixs found jobs performing regionally at various teen centers, fire halls, the Fort Meade military base, Holy Trinity Church (another Glen Burnie hot spot; they frequently booked and promoted their own gigs at that venue), and The Annapolis National Guard Armory where they got to open up an early tour date for a pre-schmaltz Neil Diamond. One of The Del Prixs’ biggest local music influences was Falls Church, VA combo The Telstars. They opened for this quartet at several different Annapolis Armory gigs (The Telstars’ fuzzed-out 1967 Columbia Records cruncher "Hold Tight" was a local hit and another crucial example of DelMarVa’s innovative teen rock).

Band battle competitions also supplied The Del Prixs with numerous bookings and the group cleaned up at these events, especially whenever Jimmy Ebler’s older sister Yvonne came along to spice things up with her wild dance routines.

Tom Lawrence: “Jimmy had an older sister who was really quite a knockout. She was a Playboy bunny… We were like 15 and she was 18, and we’d do these ‘battle of the bands’ contests and she’d come in a little go-go outfit and dance. We’d win every time!…The votes would come in and sure enough we won, and the band sounded pretty good too, but visually with the go-go girl it was kinda silly.”

Local scenesters took notice of The Del Prixs. Though none of the musicians remember the exact circumstances, it was around 1965 when Dome Records reps asked The Del Prixs to come down to the label’s east Baltimore headquarters to record an original track for the Baltimore’s Teen Beat A Go Go compilation. Unlike other groups on the album, Dome made The Del Prixs cough up a whopping $200 to cover the full price of their own session.

Tom Lawrence: [Dome Records’ head Ralph Johnson] was blind, or almost completely blind. He seemed to know what he was doing. He had some kind of reel-to-reel tape deck and a couple of mixing consoles, some old lookin’ microphones. They didn’t have all the separate tracks back then. We put “She’ll Be Mine” down live, and there were microphones on each instrument. I think everybody had to talk their parents into coming up with $50. Maybe we did a couple of gigs and just took money from the gigs. At that point we hadn’t played that many gigs. We were pretty early in the development stages. It seemed like they kinda rushed us to get going. I’m thinking, ‘Are we even completely in tune yet?’ and they’re like, ‘C’mon let’s get this thing going!’ That’s why I thought it was such a scam. I thought this guy just wanted to get our money and get us the hell outta there. We were surprised when the album actually came out.

"She'll Be Mine" uses earnest subtlety and sensitivity to turn a primal arrangement into a timeless love song. This up-tempo call-and-response tune is sung from lyricist/drummer Mike Youell’s point of view. The percussionist had already made plans to join the Navy after high school. Once his military service ended he then planned to marry his high school sweetheart Mary Lou. The words of “She’ll Be Mine” comprise a poetic vision of the couple’s impending wedded bliss: “See that girl standing on the hill/I love her and I always will/ Her Lips, her nose, her eyes so fine/I’ll love her and I’ll make her mine/She’s the girl that I’ll marry/Life and home for her and me/Just four years and she’ll be mine.”

You can’t help but laugh at Jimmy Ebler’s pristine crooning as he sings the wacky line “Her lips, her nose, her eyes so fine.” It may be the only time a nose inspired such passion. Unlike other 1960s teen rock anthems there’s no screaming, no double entendres or sexual innuendo, no lurid Jaggeresque machismo. This modest two-note melody is the perfect goofy soundtrack for a naive kid’s goofy fantasy of love and marriage. Power chords give the song a sturdy rhythmic backbone, but noisy distortion, sweeping crescendos, and other common rock histrionics just weren’t needed. With “She’ll Be Mine” The Del Prixs created the sonic counterpart for a heart carved into the bark of a tree.

Mike Youell and Mary Lou did actually get married once his Navy stint ended, though he continued his music career for a bit touring with 1950s pop hero Ronnie Dove throughout the 1970s. It’d be the 1980s before he’d enjoy the domesticity described in “She’ll Be Mine.” Youell passed away in 2010.

The Del Prixs began to drift apart in 1967 as Bill Cornell and Wayne Chaney lost interest in music. This prompted a new, short-lived line-up to form which found Cornell and Chaney replaced by two other Glen Burnie rockers, bassist Carol Riley and prodigy keyboardist Brent Hardesty. Most of The Del Prixs graduated from Glen Burnie High School in 1968 and went their separate ways with Youell, Lawrence (who went on to study music in college), and Hardesty the only members to have significant music careers beyond Maryland’s teen scene. Concurrently to his time with The Del Prixs, Hardesty worked with soul combo DC & The Capitols; once that group’s guitarist quit Brent brought Tom in as the replacement. As the 1970s came along trends changed and Lawrence changed with them. Soul was out and ear-splitting Marshall stacks were in. Tom then bailed on The Capitols to help form the Glen Burnie hard rock group Blackfoot Smoke. They recorded some demos but never officially released anything. After that he moved on to the Top 40 cover band circuit working at hotel bars and lounges throughout DelMarVa.

At the turn of the decade Lawrence headed out west to seek his fortune as a studio musician in Los Angeles. It was there that he got his biggest brush with fame when he became part of the back-up band for Marilyn Wilson-Rutherford’s girl group The Honeys. Lawrence plays on The Honeys’ Rhino Records releases and turns up in their early-1980s music video. After The Honeys’ records failed to hit big, Tom headed back to Maryland. As of the early 2000s, he was last known to be working as a guitar teacher in Howard County.