The Clash Were a Bunch of Foppish Delinquents

A very fast reading of Pat Gilbert's Passion Is a Fashion: The Real Story of the Clash. 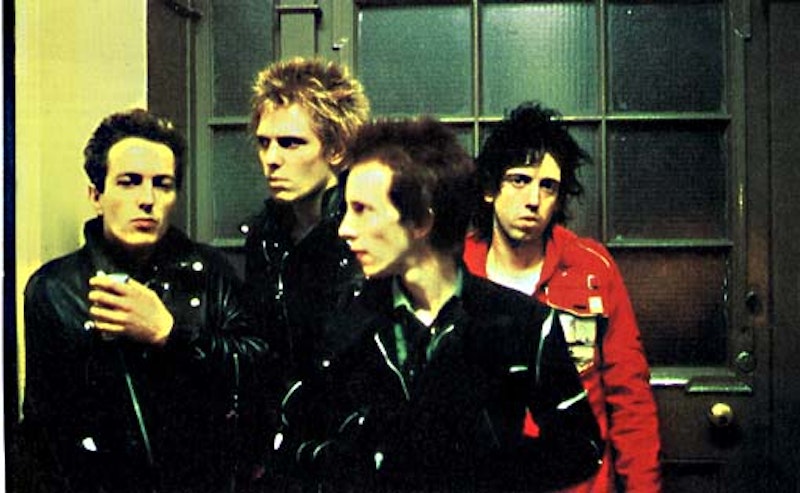 One day the members of the Clash were playing football. The group's chief flunky took the chance to size up their personalities. Here's his view of Joe Strummer, the Clash's front man, co-songwriter and chief keeper of beautiful dreams. “Well-meaning and tried hard,” the flunky remembered, “but wasn't very good.” The flunky was explicit that this judgment applied to Strummer the man, not just the football player. One can see the fellow's point. Strummer shocked respectable opinion by putting the name of a notorious terrorist gang on his t-shirt, but he got the spelling wrong. He was that kind of guy.

Of course, Strummer was better than good when it came to writing and performing songs for the Clash. It's just that he mistook this activity for something else. He thought he was bringing on world revolution, which would be a good thing, especially if it involved guns. Or he sometimes thought that. On the other hand, an uprising against the British Army would be futile. But, on the hand after that, was it not possible to ignite a spark through enacting the aspirations of… and then his thoughts would dwindle out and he would rush on stage to scrub his guitar and produce sounds we're still listening to.

A music writer named Caroline Coon came up with the best spin on the Clash's self-assigned mission. “The Clash were like a billboard,” Coon said. “If something happened in the world, they would go out and show their support for these minority groups who'd protest with guns.” While rebels in the Third World shot up their oppressors, the Clash could be the rebels' First World counterparts by using media to cheerlead for the struggle. As revolutionary activities go, this one is a lot like posturing. The Clash had groovy combat wear, without getting anywhere near combat or wanting to. So they were fops but, as Coon sees it, fops with an explanation.

Of the band's members, the bass player probably agreed with Coon's rationale.

That was Paul Simonon, who was Coon's boyfriend and also the guy who designed the groovy combat wear. The drummer, Topper Headon, didn't care about leftism and workers' struggles. He liked watching Bruce Lee and kicking a sandbag, and when he dressed up he preferred something you'd have on at a dojo. Mick Jones, the lead guitarist and co-writer of the group's songs, just wanted to be a rock star and would do what it took to get there. He liked good hotels and he kept growing his hair out. Strummer and Simonon “frequently challenged Mick about his comparatively decadent, unpunk behavior,” Gilbert writes. The flunky who analyzed Joe Strummer recalled Jones' comeback: “His reply was 'So what?'”

Strummer might have agreed with Coon's Clash-as-billboard theory, at least in some moods. Theories fired him up but didn't stay in his head. He couldn't conceptualize, couldn't calculate, couldn't plan. He was a plunger, not a thinker. More power to him, but the poor bastard thought he was thinking. The band's manager, a fast-talking amateur dialectician, talked him into a bold move to assure the band's purity. Strummer fired Jones and soon there was no Clash. Only Strummer and the manager were surprised, and the manager was a nut. (“They'll be talking about this in the car factories,” he told the boys after a gig that had furthered the revolutionary cause.)

Stories behind the songs. Strummer wrote “Guns on the Roof,” a galvanic anthem about violence and politics, after Headon tried shooting some pigeons with a friend's spiffy new air rifle. Headon did the firing from the roof of the band's rehearsal hall, and he did so without pausing to reflect that England was fighting a war against Irish terrorists. Alarmed police came swarming in. “There's a helicopter above us, eight police vans and the Sweeney [Flying Squad] with guns,” remembered Simonon, who had come along for the pigeon shooting. The drummer, the bassist and their friends were hauled into Brixton Prison, then sprung that day with bail money from the record company. Coon got them out. She said the band's manager, the nutty dialectician, wanted them to stay a couple days so they could deepen their political education.

At one point the manager had also decided that Strummer and Jones should get down with Third World revolution and the roots of reggae. So he had the record company fly them to Jamaica. On their first day, they ventured out of their hotel to buy pot. They quickly became alarmed: impoverished black people were everywhere, some of them shouting “White pigs!” Jones and Strummer made it back to their hotel and decided to spend most of their trip there. They went out to see movies, but that was pretty much it. Mick Jones signed a postcard “Yours, scared shitless, Mick.” The best thing about this story is that it caused Strummer to write “Safe European Home,” a rock song of annihilating power that's all about going to the poor part of the world and finding out you don't like it. The second-best thing is that the boys were wearing their groovy combat gear when they went out to buy pot and got so scared.