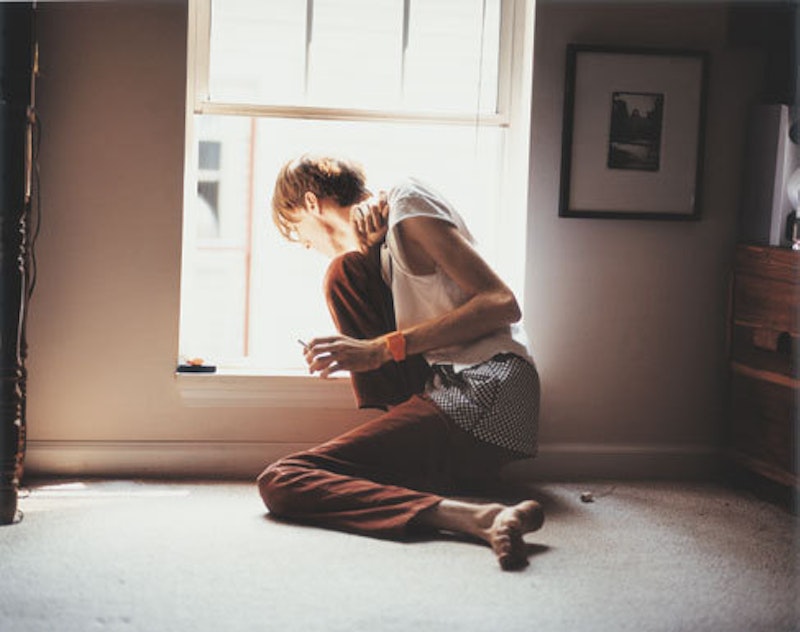 As you may or may have not heard, Deerhunter has a new album coming out next week. Monomania is pretty good—really good, actually—and arguably better as a long player than any previous Deerhunter LP, though there are two Atlas Sound albums that top it. What do these two bands have in common? Georgia-born singer-songwriter Bradford Cox, a prolix, whirling dervish of contradictions, guises, and effects pedal fetishes. The guy writes a ton of songs. For reasons that I don't understand, other people prefer his post-2008 material when the songs are a) rather conventional, b) the lyrics come across as universalist and dull, and/or c) they're on albums one can purchase on iTunes or in stores.

Everything else is just distraction, mere window-dressing. Given that Cox chose from 200+ demos for Monomania, you just know that there are days and days of smoked out, dead-eyed fire hidden in one hard drive or another, waiting for release on some super-duper limited edition quadruple-cassette box release. In the meantime, dig into these.

The kindness of clued-in strangers aside, it is impossible to find "I Slept On The Bridge" anywhere: not on YouTube, not as a stream, and not via Cox's original, long-dead Mediafire link for How I Escaped The Prison Of Fractals. That's a crime, because "Bridge" is one of those drowsily slip-sliding quicksand jams that sounds like the result of somebody monkeying around with home studio gear and emerging with something wondrous and lysergically holy. Humid. Florid. Swamp like. The first Atlas Sound LP was way denser, heavier, and more intense than this song gets, this floaty, labryinthical zone-out loop monster, mouth-breathing its way into the sunset on recycled choirs and chop-shop beats.

"Holiday" sounds the way a 1980s video filmed in the English countryside through a translucent lavender lens probably looks: washed out, brittle, kind of twee. Listening to it is like playing tackle football with a cousin who, you've been warned, has very fragile bones. The likelihood of everything falling apart seems very, very high, with Cox's jingle-jangle guitars running in place in that hazy sweet spot somewhere between full acoustic and scaled-back electric. The lazily chilling vocals suit the vibe nicely, while the narrator, of course, is the kind of sociopath your parents probably warned you to stay away from: invoking Lou Reed's "Perfect Day," carjacking Cameros, arguing dreamily with the voices in his head, icing his folks and probably yours, too, with a sort of half-assed prejudice. When this guy mentions that he's on his way over to hang out, you don't really have a choice.

Marble-scatters of reverb, echoing guitars nodding off, layer cakes of tone, tonal incense as thick as day-old porridge: "Bored Dub" borrows 50s pop girl-group melodics and flips them into an ode to a boredom so intense and paralyzing that Cox brags about drifting into a state so far beyond consciousness that angels materialize and, presumably, regard him with an equal measure of boredom while tending to their wings. There's some degree of kiss off in the lyrics, but that's dispensed with quickly and mercifully so that everyone can vicariously indulge in the experience of falling through a waterbed and into a breathable ocean of anesthesia peopled by mermaids who all resemble an indolent Chloe Sevigny.

You can't get much more thematically literal than this. "Trains" is a tour de force of bed-headed chugga chugga choogle, our host freestyling with an impervious indifference over a groove so demolished it's practically tamed free jazz. I always imagine that Cox cut this thing after a 12-hour listening session devoted to prescription painkillers, Pavement's Wowee Zowee, and that album's more, shall we say, unhinged outtakes ("Easily Fooled" and "False Skorpion," I'm looking at you). This is arguably the best song he will ever write.

"Lanterns" is emblematic of the kind of Northern Lights thermal updraft ambient that was (sadly) in short supply on the Bedroom Databank releases, this sort of whooshing noodly New Age glow worm shit he pulls these days that gets relegated to bonus EPs or doesn't see release at all, which is a shame, because Cox is so good at it. Who says he needs to sing all the time? He doesn't.

There's a bit of "Holiday" and a bit of "Bored Dub" coexisting nicely here, with threshed guitars tramping alongside Cox's doubled vocals and until the Scooby Doo organs kick in near the end to make the idea of teenage electro shock therapy feel even creepier than it did already. Commingled pop-savvy sass and institutional ickiness aside, "Artificial Snow" is interesting, also, because it feels inconclusive, open-ended. Not just the fact that we don't know what's going to happen to this kid, though we might surmise that he'll eventually pop up on "Holiday," but in the sense that Cox seems to have under-written the song. It feels unresolved, as if the primary chords came to him and he fucked around with them but couldn't find a satisfactory way to end it, so he compensated by coming out with several versions of the same tune. It's still awesome, though, and its incompleteness is arguably (and oddly) key to its continued viability.