The Best of the J. Geils Band 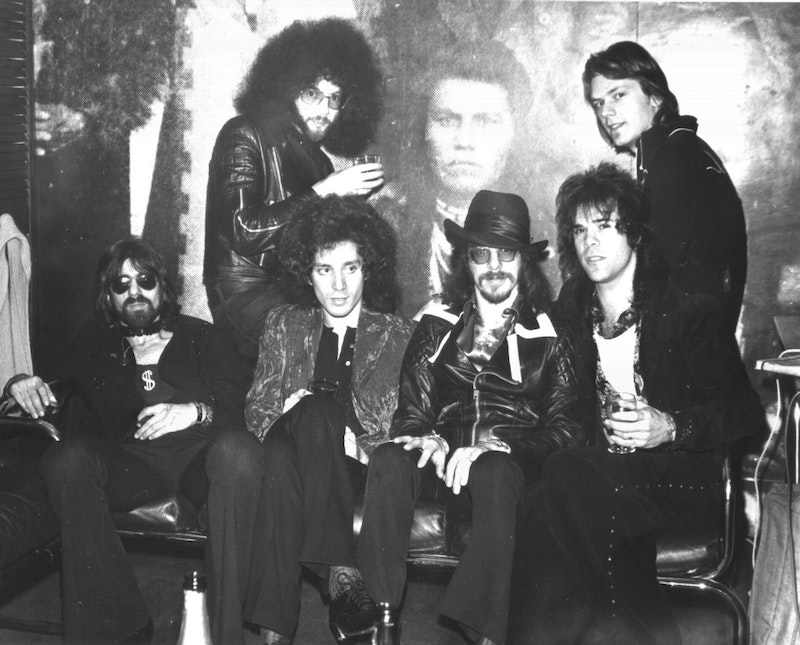 It's too bad that the J. Geils Band, the Boston group whose guitarist John Geils died last week at 71, is remembered almost exclusively for "Centerfold," though occasionally in the wake of a break-up you still run into "Love Stinks." They were about as good a blues-oriented rock band as America ever produced—surpassed only, perhaps, by the Allman Brothers.

In the era of rock 'n’ roll in which they formed and first flourished—1969-76, the interregnum between psychedelia and punk—you could still fill arenas with a raucous or relatively refined electrified roots music. Many did: The Faces, for example, Led Zeppelin, The Stones, Cream and Derrick and Dominos, even Iggy and the Stooges. It was definitely party music, its big stars thought of as sex-and-drugs bad boys. The J. Geils Band gave it a particularly crass twist, as lead singer/showman Peter Wolf (Peter Blankenfeld) appeared on stage with a dollar sign on his cool-ass tux, and lit into "First I Look at the Purse."

It was the golden age of the rock 'n’ roll frontman, modeled to a large extent on Mick Jagger: Stephen Tyler, Robert Plant, and Rod Stewart, for example, were emcees, dancers, singers, sex symbols, shamans, and jet-setters, crossing the stage in variations on a cockstrut. Before too long, Wolf was married to and divorced from Faye Dunaway, as the band's publicity photos and record covers showed classic trashed hotel rooms and tales emerged of legendary parties.

The songs written by Wolf and keyboard player Seth Justman—"Cruisin' for Love" or "Floyd's Hotel"—weren't exactly deep, but embodied a great soundtrack for misbehavior. They were performed with an extreme party momentum that was already a revival of rock's origins, and Wolf, even as he ran through another jive-talking deejay rap, was always dropping hints on the slower material that he could be a great soul singer. They expanded their stylistic range as they went on, always with a basic roots underpinning. “Give It to Me,” from the 1973 album Bloodshot, moved from a reggae beat into locked-in funk.

And, as the Allmans had Duane's great slide guitar, the J. Geils Band had an instrumental virtuoso: the pricelessly-named harmonica player Magic Dick (Richard Salwitz). Through the 1970s, his harp was the featured instrument, and I'd credit him not only as one of the greatest blues harp players who ever blew, but as the inventor of rock harmonica. His show-stopper “Whammer Jammer” was at once an unbelievable technical display and a fine, juicy blues composition. Also, it sounded great in a rock concert, as they turned out the lights, Wolf yelled instructions ("Blow Your Face Out!"), lighters came out, and Dick waved around the ultimate Jewfro. Few bands ever poured out more energy onstage.

On songs like "Gonna Find Me a New Love" and "Floyd's Hotel," Dick developed the harmonica as a rhythm instrument in a rock band, setting up a riff at the song's heart and then driving it forward, substituting for a horn section or giving guidance to the bass player. He could find perfect soul riffs, and the band casually threw down a wonderful performance of "Where Did Our Love Go?" for a 1976 single. Dick experimented later with effects such as phase-shifters and harmonicas of his own invention. The 70s yielded a few other examples of rock harp, such as Lee Oskar with War, but somehow the harmonica never quite became an important rock instrument, despite occasional outbreaks such as John Popper.

According to rumors, the band was chronically broke by the end of the '70s, with tax problems and no Top-10 singles. By 1980, I think, they'd made a conscious decision to move off the blues-and-soul model and see whether they could generate some hits. They succeeded with "Centerfold" and a couple of others, which emphasized Justman's keyboards rather than Dick's harmonica. Then they disintegrated. Justman went off to produce records for others (including Debbie Harry's Rock Bird). Wolf calmed down and returned to his own roots, making melancholy albums of Don Covay-style soul. Magic Dick and J. Geils made small-label blues albums, probably what they wanted to do in the first place.

Playlist: Best of J. Geils (I'm including the source album because the same songs are liable to appear on various studio and live albums.

(14) “Givin' it All Up for You” (Nightmares...and Other Tales from the Vinyl Jungle)

+ Debbie Harry, “You Got Me in Trouble” (Rockbird)