The band's debut album, Guppy, expands on the off-kilter appeal of their earlier EPs. 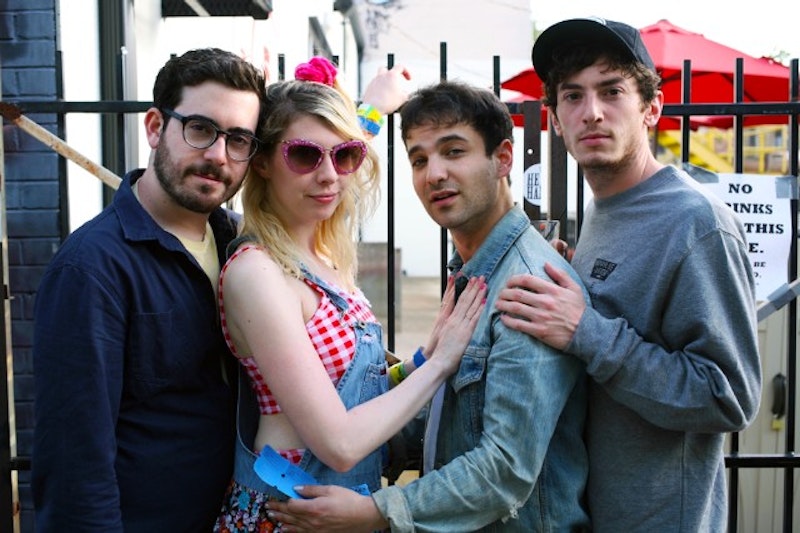 I predicted that Charly Bliss's Guppy would be my favorite album of the year back in March, a little less than two months before I’d even heard it. Like Bully's 2015 debut Feels Like, Guppy is the product of a long gestation, the first full-length from a band that's been around for over five years, a group who shelved recordings, took guitar lessons, and rotated producers in the search for a distinctive sound. This was frustrating as an early supporter: their 2014 EP, Soft Serve, led with "Love Me," still one of the most killer indie rock songs of the decade, and I couldn't wait for new material. Frontwoman Eva Hendricks imbues her unique personality into every Charly Bliss track with yelping ad-libs, hilariously honest lyrics, and an uncontainable sense of energy; nearly every song on Guppy flirts with the threat of spilling over into sonic mayhem, a fuzzy exuberance absent in even their loudest peers.

Charly Bliss has been labeled "pop-punk" by many music critics, lumped in with other bands that conform more to Blink-182 and Brand New. But Hendricks & Co. offer something different than Joyce Manor, Modern Baseball, and Chumped (RIP), three excellent groups that rose to prominence during the last half-decade, beneficiaries of emo's critical reappraisal. While the latter bands treat break-ups like any other Warped Tour mainstay—with diaristic sincerity and heartache that skews toward the histrionic—Hendricks addresses exes with humorous self-deprecation and bizarre anecdotes. On album highlight "DQ"—probably the best song in their arsenal—she sings: "I laughed when your dog died/It is cruel, but it's true/Take me back, kiss my soft side/Does he love me most now that his dog is toast?" This lite-sadism is refreshing in a social media landscape where you can't scroll through Twitter without seeing an abundantly re-tweeted post about some three-legged Golden Retriever who befriended a pair of orangutans.

Hendricks' cavalier delivery often belies the content of her songs; some tracks veer too far into bubbliness until you realize what she's singing about, giving them an ironic bounce. This dynamic informs Charly Bliss's central appeal: they maintain a grunge-pop aesthetic—with superficial similarities to 1990s luminaries That Dog, Letters to Cleo, and Veruca Salt—while weaving cynically funny and, oftentimes, corporeally visceral, imagery through their songs, giving them an off-kilter but entirely catchy quality. On "Glitter"—the album's synth-y lead single—a line about getting the song's shiny namesake stuck between your teeth is followed by the sobering couplet "I can't cum and I can't lie/I can't stop making myself cry." Tears aren't the only bodily fluid being shed on Guppy: when Hendricks isn't bleeding from one wound or another, she's looking like a glutinous vampire by staining her mouth red with Gatorade, or peeing herself on the trampoline.

I was so confident that Guppy would be my favorite album of the year because, up to that point in March, Charly Bliss hadn't released a single bad song. They may not be the most sonically innovative musicians in 2017, but they're more than just '90s nostalgists. They've revamped the framework of their fuzzy forebears with anxious, contemporary humor. Their perfect streak continues.