The best lineup of the year at Baltimore’s Wind-Up Space. 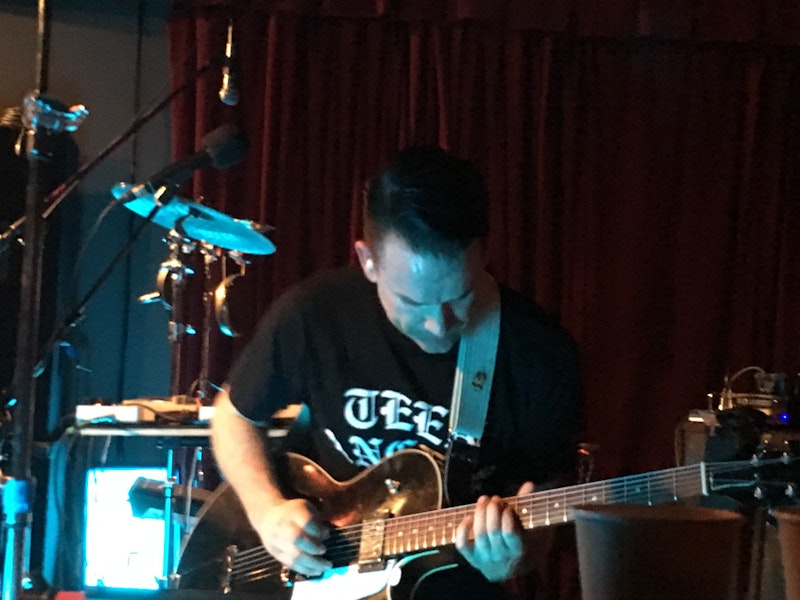 A line out the door of the Wind-Up Space on Palm Sunday! No more late nights, no more lazy Sundays! Thankfully Unregistered Nurse came through with another show that started on time and ended at a reasonable hour. This was my favorite lineup of the year: Lent, Halloween Trés, and Xiu Xiu. I’ve been trying to see Lent for a while—between lost tickets and events running late, I didn’t get the chance until the other night. Lent is Rjyan Kidwell (keys/electronics), Dan Breen (guitar), Martin Kasey (saxophone), and Alex Hacker (drums). STELLAR: controlled chaos, finely tuned grooves and hypnotic locks of sound. Martin Kasey hopped on stage about five minutes into the set, rushing in on his way over from playing sax at a play somewhere else in the city. I think Lent has a record in the can, and I look forward to hearing it. This silly City Paper review of the show by Brian Line called Lent “a parody of Horse Lords,” a stupid comment and way off the mark. Their instrumentation is roughly the same, and both bands work in tension, repetition, and hypnotic rhythms, but a “parody”? Please.

Halloween Trés are another one of Baltimore’s most exciting new bands, a group that people will moan about missing out on in 10-20 years. Go now or cry later. Hopefully someone will be taping. They’re picking up where bands like Arab on Radar and the USAISAMONSTER left off—singer Lorenzo Baeza stalks the stage bug-eyed and taut, barking lines like “no bones like my bones” and wailing “WHY???!??!?!?!?!?!?” at the end of their set in an embrace and embodiment of total psychosis and crushing frustration. Aaron Estes (bass, drum machine) and Lucas Rambo (keys, guitar, saxophone) weave spider webs of sound over Lorenzo’s howling. The first time I saw them was last March at the Wind-Up, and all their songs were short and sweet, with Estes moving back and forth behind the PA to start the next drum machine pattern. They’ve gone way out since then, truly unpredictable musically, beyond their infinite closet of costumes (Rambo had on a red clown nose on Sunday, and under the stage lights, his face looked as if it were coated in white greasepaint, a sax-blowing, synth-stabbing Pennywise). Estes had an unlit cig (or joint) in his mouth throughout the whole set, buried under a brown wig swaying back and forth and slapping his bass. I was really sad to hear yesterday that Load Records is shutting down after 24 years - but it's encouraging watching Halloween Trés, because they conjure the same nervous excitement, power, danger, and anger of so many of those Load bands and beyond.

I’ve loved Xiu Xiu for years, ever since I first heard the band’s 2006 album The Air Force, the only record of theirs that I like top-to-bottom. But there’s amazing stuff everywhere in Jamie Stewart and co.’s dense discography. Too many releases? No, never… Xiu Xiu have remained remarkably consistent and people keep coming out—most of the crowd were MICA kids or teenagers from the suburbs. Watching a buzzed and chatty crowd fall into reverent silence is beautiful, though the vibe wasn’t as grim and funereal compared to the last time I saw Xiu Xiu—just Stewart, at the Golden West, completely devastating—there were some dumbasses next to us by the side of the stage, wasted and loud, bleating idiots going on about how they got their records signed and taking flash photos on a big plastic Urban Outfitters camera. I heard someone behind me kvetch about having to stay out past midnight, “But I’ve loved them for 15 years, I have to stay.” I expected a diverse crowd, but was surprised how many people immediately recognized old songs like “Sad Pony Guerrilla Girl,” “Crank Heart,” and “Fabulous Muscles.” Accompanied only by Shayna Dunkelman, Stewart powered through despite a sore throat and showed no signs of tour fatigue or emotional exhaustion. The setlist was mostly stuff from their latest record FORGET, and it was remarkable seeing how much Stewart and Dunkelman could conjure and play from such a complex and intricately produced record. Keep in mind they might have the most complicated line check I’ve ever seen—tables of toys, pedals, noisemakers, bells, drums, percussion, along with expected guitars and pedals and synthesizers. The mangled melodic line that comes in halfway through “Get Up” sounds alive, like a creature—it was remarkable seeing Stewart play the line on his guitar and get that sound through an array of pedals. This was the proper “rock show” version of Xiu Xiu I’d never seen before—that 2012 Golden West set was deep drone and dread—and I loved the histrionics of “I Luv Abortion,” Stewart screaming, “I LOOOOVE ABORTION, YOU ARE TOO GOOD FOR THIS LIFE” and then jump-kicking a china cymbal.

Noise rock and experimental music that can’t be categorized, or is too weird or harsh for the indie kids is doing fine. Meanwhile the last band to update the standard rock band set-up was Animal Collective circa 2004-2006, indebted as much to Pavement as Sun City Girls—Xiu Xiu are approaching elder status in freak world, and I was encouraged by how moved and un-jaded the crowd that night at the Wind-Up was.