The Answer, You Fuck 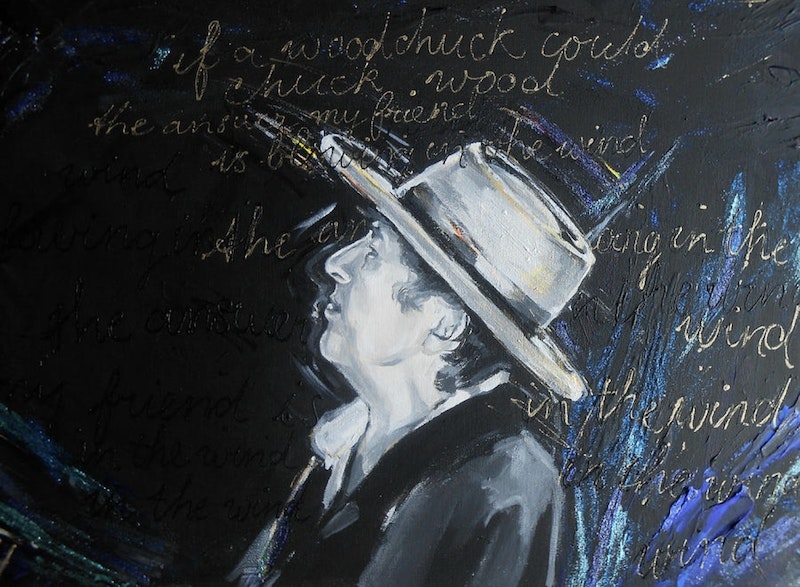 According to Immanuel Kant, when I reach an aesthetic judgment—when I come to think that some work of art is excellent and beautiful, or botched and ridiculous—I necessarily believe that everyone else will agree with me. I always thought this was a ridiculous assertion, being perfectly aware that most people don't share my taste and not really expecting them to. But the case of Dylan makes me realize there's something to it, as well.

When the Guardian's fine music writer Ben Beaumont-Thomas speculated that polling would identify Bob Dylan's "Blowin' in the Wind" as the greatest song of the 20th century, I found the speculation plausible. I know people feel that way—I've heard “experts” say things like that for 50 years—but in my aesthetic heart I don't know how or why. I don't know "what they're hearing." I start speculating that they’re insincere, self-deluded or defective, which is just what Kant says I should think. He thinks that the idea that there's something wrong with people who disagree is built into every judgment of taste. In my heart, I do think this. It's wrong to think it, maybe. Disrespectful. Listen to whatever you like! Wait, though, you like that? For real? For sure?

One thing that Beaumont-Thomas is right about is that the new luxury version of "Blowin' in the Wind" is a bad idea. Dylan re-recorded the song, and then I guess his "people" had it pressed onto lacquered aluminum, placed into a lovely wood cabinet with a titanium plaque certifying its authenticity and sold it for a couple of million dollars. It's as though they're trying to sell Xerox copies as Mona Lisas, and I agree with Beaumont-Thomas that this approach betrays the very idea of popular music and also the value-systems we might associate with Dylan's work, if not really with the man himself: you know, peace, love, and authenticity rather than cash-out capitalism.

Anyway, "greatest song of the twentieth century" is an absurd category: there are too many great ones doing too many different sorts of things for different audiences. But for heaven's sake I might start with an item or two of Marley, or Hank Williams, or Robert Johnson, or Cole Porter, or Billie Holiday, or Dolly Parton, or Harlan Howard, or Lucinda Williams, and that's only a few from the around here. But I don't find "Blowin' in the Wind" a plausible candidate for the best song released in May, 1963.

I'm not even sure how to count the roads I've walked down, literally or metaphorically, and if the wind decided to give me the count, I'm not sure what that might do for me. Whatever the final tally, "you" "can" call me a man, or not, just as you please. Maybe it's about civil rights. But it's rather cryptic, isn't it?

I think the protests that are registered in the song are vague, incoherent, speculative, and commonplace. Beaumont-Thomas describes them as "potent," "universal" and "regenerative." "Particular lyrics need to be heeded now more than ever," he writes. “'How many times must the cannonballs fly/before they’re for ever banned?' hits hard in the wake of a series of mass shootings in the US." I don't think that can be about school shootings or how hard that really hits: more wet noodle than cannonball. Now, the idea of "banning" war was very popular through the whole century, but it foundered on a particular difficulty: who's going to do the banning? Are you hinting at a world government? Or at anything at all?

It has some better lines too, but let me ask you about the role of the "wind." Are we just about to catch these answers because they're blowing around our feet like leaves? Or have the answers blown away in the wind, never to return? Is the wind the zeitgeist; is it God; is it the questionable breath of Bob Dylan himself? Does the wind whisper "Mary?" If the wind starts telling me things, should I regard it as a credible source, and if I do will that indicate that I am insane? The answers, you fuck, are quacking like a duck.

You could think of all those questions as having been raised by the poetic richness of Dylan's language. I prefer to speculate that he just didn't think the thing through at all. It's one of his best lyrics, however, because it's not filled with pseudo-Jungian pseudo-surrealist symbological claptrap.

In short, I don't think Bob Dylan is very good, in particular as a lyricist, and if no one ever hears the 1.5 million euro version, it's no great loss. I can't expect you to agree with me; in fact, I can expect to read many more books by professors arguing that Dylan is better than John Milton. But still, in my heart, I can't understand why or how you don't agree with me, even though several people, starting with my older brothers in '69, have really tried to carefully explain the whole thing to me.

Prophet or charlatan? The latter, all day every day, in my view: a fake to the tips of his fingers. Surely, he's ready "for to" fade, or for to a-fade, or to insert random syllables of pseudo-old-English or gratuitous prepositions into his half-baked pseudo-prophecies. But I admit that, in the "The Times they Are a-Changin’," the Prophet predicted the Capitol insurrection:

Come senators, congressmen
Please heed the call
Don't stand in the doorway
Don't block up the hall
For he that gets hurt
Will be he who has stalled
The battle outside ragin'
Will soon shake your windows
And rattle your walls
For the times they are a-changin'