On Montgomery Records, The Curfews were unmatched in their particular sound. 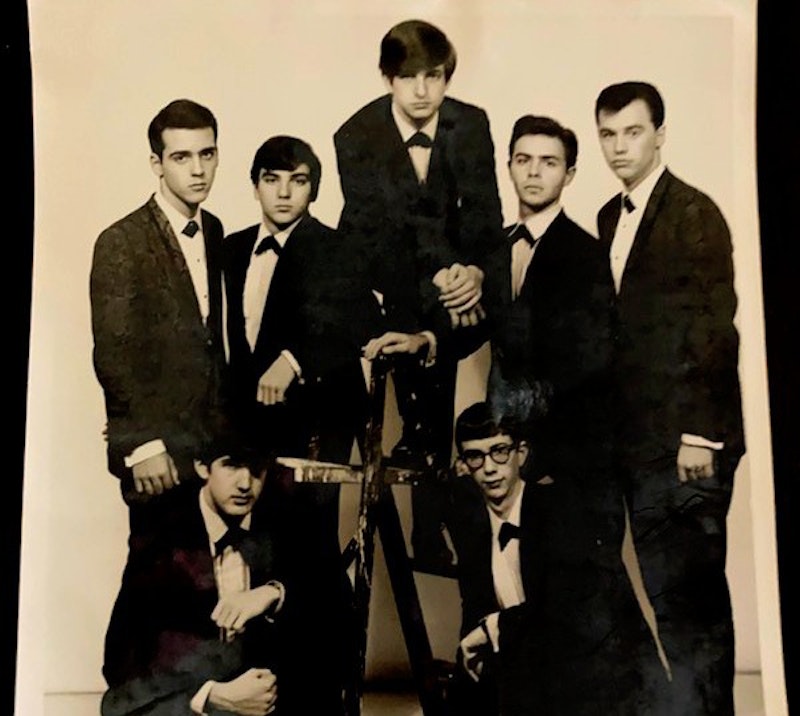 Of all the artists who released music on Montgomery Records, The Curfews best epitomized teen garage rock. They were also the most mysterious band on the label, a group whose identity was almost completely unknown to collectors until recently. Despite their obscurity and the innocent charm of their recordings The Curfews’ achievements as a live act put them on a level beyond the average teenbeat combo. With the aid of Leonard Schwab, Ray Vernon, NYC pop svengali Neil Levenson, and other entertainment legends, The Curfews’ efforts gained support from a wide variety of venues and East Coast music scenes. They seemed poised to conquer the world, but bad luck, an identity crisis, and shattered loyalties put a halt to lasting success. Nonetheless, their story is a testament to the transformation rock ’n’ roll experienced from the mod mid-1960s into the hippie era.

The Curfews evolved out of The Newports, one of the most popular DC area acts of the early-1960s and a group with connections to several Maryland luminaries. The most notable was Tom Willet, who later formed The British Walkers with Bobby Howard; Tom’s the father of experimental music legend Jason Willett. An early Newports lineup also included Greg Novik, a multi-instrumentalist who’d go on to fame as the man behind beloved Baltimore’s Greg’s Bagels. Fronted by singer Cal Linley (aka Calvin Linthicum), The Newports’ high energy/r’ n ’b stomp was a staple of the regional teen club circuit. In 1963 Cal left The Newports and briefly joined an unrecorded vocal group called The Velures. By ‘65 Cal formed a different kind of combo that showcased the DC scene’s brash new breed of post-Beatle rockers. In harmony with the concerns of their predominantly teen audience, the new group dubbed themselves The Curfews.

The Curfews recorded two excellent singles for Montgomery. Leonard Schwab was The Curfews’ manager during their peak of popularity.

Leonard Schwab: “When I first started working with them, Cal had two other guys singing backup, DJ Morton and Chris Thames. They also had a drummer that looked a little like Ringo and a bass player, Gary Utter, I think, but not sure of his name… Later on, there was a different bassist...”

Cal Linley split from the band for long-forgotten reasons at some point in 1965 soon after the release of their first single. It’d be several years and personnel shake-ups before The Curfews made their way back into a recording studio. In the meantime, a new lineup began working hard to re-establish themselves sans the pedigree of a Newports connection. Two of the earliest members to join after Linley’s departure were DC area high school students—Rick Rowe of Wheaton, MD and Dave Eaton of Silver Spring.

Rick Rowe: “I began accordion lessons at age 10, then switched to guitar at around 14 being influenced by the Ventures and other instrumental groups, and the British Invasion. Prior to joining the Curfews I had a band called The Night People. It was five Wheaton High guys and we covered songs from The Beatles, The Who, The Yardbirds and other popular groups of the day. We played at local teen clubs and some private parties.”

While still an elementary schooler Dave Eaton began his music career bashing apart cardboard boxes in time with the wild beat of his older sisters’ 1950s rock 45’s. Along with 50s rock, Dave’s love of music was fostered by concerts he attended during his Junior High days—frantic local r’ n ’b events at urban DC youth centers and YMCA’s, and a high-profile Beach Boys concert that happened at Rock Creek Park’s Carter Barron Amphitheatre.

From there Eaton began taking music lessons and got his own drum kit in 1963. Around the same time he joined a band called The Outcasts. The drummer’s recollections of the combo: “We were a pool party/garden party kinda band… we had no clue what we were doing.” The Outcasts existed for two years. After this, at 15, Eaton joined The Curfews. His stint began when bass player Steve Thiebault responded to a newspaper ad in the DC Evening Star’s Teen Magazine. The ad announced that The Curfews were auditioning new members at a practice space in Northwest DC. Thiebault befriended Eaton in school and asked Dave to come along as The Curfews were also considering getting a new drummer. Eaton passed the audition. Soon after that, the 15-year-old Rowe became The Curfews’ new guitarist under similar circumstances.

Other members at the time included Steve Spencer (a Bethesda-based keyboard player who Eaton described as “the electronic wizard of the band”); Thiebault served as bassist for only a short time—he was fired and replaced by Rowe’s Wheaton class mate, songwriter/multi-instrumentalist Steve Geyer. Singer Guy Bokolese took over lead vocals.

Rick Rowe: “I had heard of (The Curfews), but had only seen them one time, (at my high school). I remember thinking that these guys were a cut above the usual talent at these school events. In other words, I was impressed. I never imagined I would be playing with them later.”

As 1965 turned to ’66, the group’s momentum never let up. They graduated from youth centers and local teen clubs to lucrative gigs at debutante balls, country clubs, opening slots with national stars (The Toys, Donny Hathaway, Link Wray, and Carla Thomas), and benefit concerts staged to support progressive causes of the day. The potential for success seemed limitless.