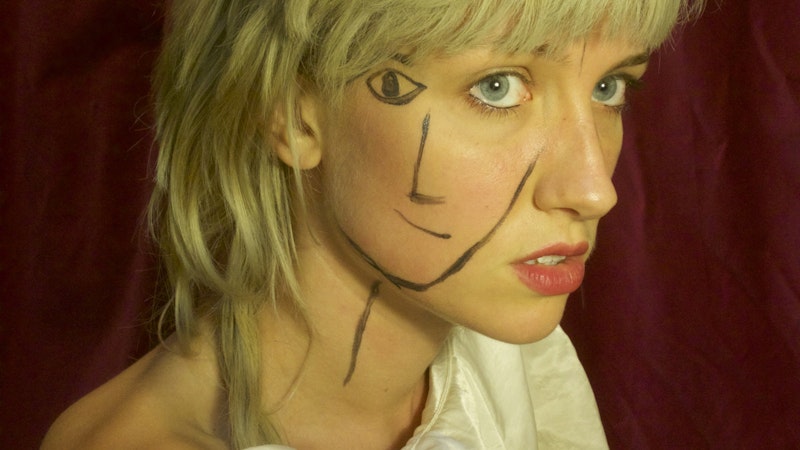 Electronica is the bedrock of contemporary pop. But it’s also the bedrock of contemporary experimental music. Computer and synthesizers can create catchy dance tunes for the bopping kids, or they can create twisted hideous squalls of noise for slightly different bopping kids. When you’re driving along in the mainstream, you just have to give the wheel a half turn to end up in some hammering, blaring byway.

Katie Alice Greer, who formerly played with DC Punk band Priests and recorded solo as KAG, is hardly the first artist to play with pop/anti-pop. There’s a tradition of goth alternative outsider oddballs who like to pretend to be radio hitmakers and vice versa, from The Art of Noise to Danielle Dax to Björk to M.I.A. to the much-lamented SOPHIE and 100 Gecs. On her debut album Barbarism, though, the LA-based Greer builds her own particular artificial landscape of sun-drenched, smoldering pits.

Greer mostly avoids the shrieking autotune and electro-glitch of the current hyperpop scene. Instead, on Barbarism’s opening track “Fits/My Love Can Be,” her yin soars via retro New Wave and her yang crawls through pounding industrial tunnels. Greer belts the catchy melody with open-hearted radio-ready earnestness while the world around her collapses in a feedback roar of metallic scraping and hammering. The lyrics skitter back and forth between anthemic paranoia and anthemic optimism. “My love can't be asked to dance, no/Feet in the street unseen by surveillance,” she sings, before echoing June Jordan.

When I hear people in the street I know they're just like me
Searching for the universe in strange words a stranger speaks
I need a reason to sing
I need to wait in the wings, you said
But tell me, aren't we
The ones that we were waiting for us to be?

It's a song about a community of strange dancers who don’t want to be seen but also want to be in the street being strange words together. Pop is alienating. And at the same time alienating pop is a joyous community, a kind of secret negative image of a party that includes everyone.

“Dreamt I Talk to Horses” follows a different pair of roads less traveled; it’s girl-group pop processed until the girls in question drown and turn into mermaids. The lyric video shows wavering images of Greer driving around LA as she sings obscurely about World War IV, waking up alone, and self-metastasizing. “Tumor’s coming out now” belted out with rapturous multi-tracked harmony, is about as ominous a metaphor for personal growth as you could come up with. It’s half a satire of pop’s self-help rah-rah lyrics, half a version of them suitable for oddballs whose selves come in shapes and sizes you can’t contain in just your run-of-the-mill average cellular tissue.

Some tracks, like “A Semi or a Freight Train,” with its sweetly vulnerable vocals and strummed guitar, are more straightforwardly indie pop. Others, like “How Do I Know (Pring 5),” capture a spooky echo and pulsing throb which wouldn’t be out of place on a goth or darkwave playlist alongside Bauhaus or Boy Harsher. And still others like “No Man” are so dissonant and deconstructed they feel like they’re going to come apart into constituent muttering and ambient noise.

The album’s joy is the way that different familiar genres, popular and less so, slide and thunk and slouch into and out of Greer’s brain and equipment. Barbarism hears what everybody hears, but uglier and weirder and all at once. The system opens up and swallows everything and them twists and oozes, like a tumor emerging with a noise like harmony.