Struck Out and Stabbed Through By Savage Pencils

Is “I Found A Ring In My Ear” the future of Lightning Bolt? 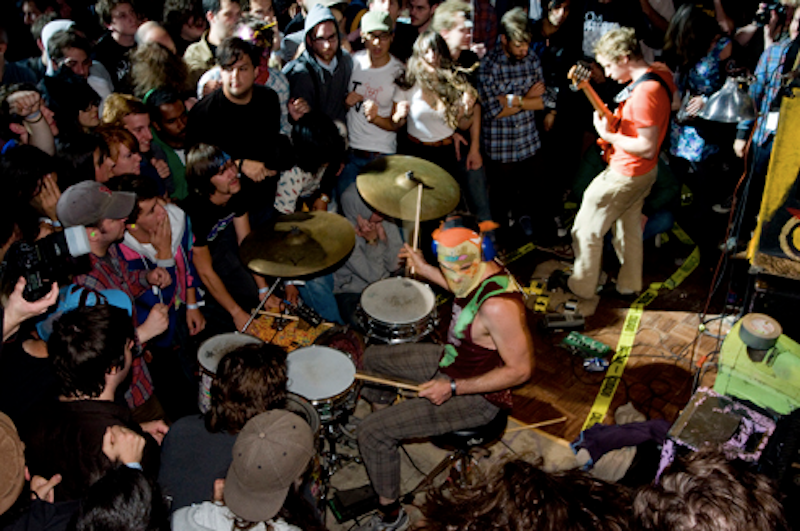 “I Found A Ring In My Ear” reaches critical mass somewhere around the eight-minute mark. Prior to that point, there’s a lot of power noise-duo throat-clearing and dander gathering on display, with bassist Brian Gibson and drummer Brian Chippendale lost in the conceptual wilderness, improvising blindly and furiously. Finally finding a path of sorts, the pair bludgeon it without entirely dominating it, building up, eventually, to a flailing lather of metal-god riffs and 360-degree oppression; think of Hypermagic Mountain’s “Dead Cowboy” at its infinite-gnashing midpoint, but imagine the players’ sonic seams showing. And then, just like that—with 12 minutes and change left to run—“I Found A Ring In My Ear” becomes awesome.

The loping precipice theme developed and distressed previously is overheated and turned nearly inside out, the flurried volley of bent notes slagged and exploded as Chippendale’s manic patter asserts itself and Gibson’s fingerings accelerate furiously, reaching out and up to disfigure new scales before swan-diving gracelessly back down into that original theme with a vengeance. There’s a sense, here, of something almost adversarial happening between these two men, in contrast to their past Marvel Team up instrumental heroics; it’s like listening to an act of physical and emotional violence, like Stephen Wiltshire laying exquisite waste to an intricate cityscape.

So everything’s just in flames, except that in exceedingly short order these flames dissipate to reveal Lightning Bolt astride a mountain range and awash in manageable distortion, rocking Lycra jumpsuits and codpieces and Def Leppard wigs. The muppet howls are so absurd and the guitar licks so sublime that you almost don’t notice how “Ear” doesn’t really have a pulse anymore, a clinic opening up in place of an asylum. And the effect is such that as Gibson and Chippendale opt to rapidly ramp up the Ritalin complexity even beyond the early pace and intensity, the shifts and sub-shifts feel earned and genuine—and the choice to cut the song off short of an official ending, implying that “Ear” is part and parcel of some endless, byzantine jam session, makes perfect sense.