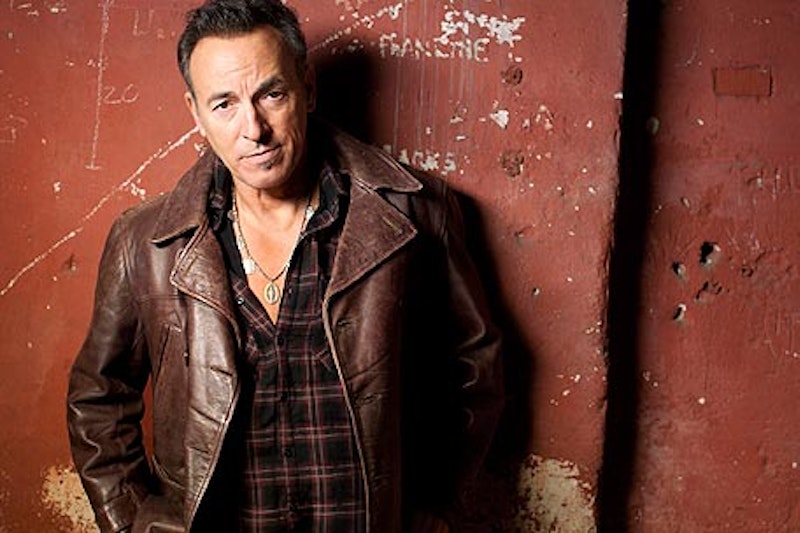 "We've been travelin' over rocky ground," the chorus declares on Bruce Springsteen's latest, Wrecking Ball. And who can deny it? The recession has kicked America in its stained blue jeans; it's wrestled us to the factory floor and stepped all over our soaring dreams of a good day's work for a good day's pay. But the Boss is here to tell you that we will overcome. A sample of gospel here, a neo-soul quasi-rap there, and, of course, that big, bad beat, performed by Springsteen himself, repeatedly and emphatically smashing his earnest face into the drum.  Whump!  Whump!  Whump!  Yeeeeeeeeeeeeyuuuuuuh! This recording matters! Preach it!

Springsteen has arguably been capable of nuance in the past— Nebraska is, at least, a quiet album. But the recession is big and, obviously, it calls for a big response. An anthemic response.  A response that causes hogs in the next county to prick up their ears and fart for freedom. We need drums that smash and guitars that soar, and maybe some horns that also soar. We need people to scramble up onto the roofs of their underwater homes and light candles to show that even though we collectively made atrocious financial decisions in the past, we are not so defeated that we can't continue to appreciate atrocious music in the present.

With an almost simian acumen, Springsteen limns the troubles of our time, speaking for the working man and woman inside of rock stars everywhere. "I've been down but never this down/I've been lost but never this lost/This is my confession/I need your heart/in this depression," he sings on "This Depression." You see what he did there?  It's, like, a play on words, because "depression" means both an economic depression and being really sad.  So he's saying he's really sad, which is what you say in a pop song, plus he's talking about how the country is having trouble economically. Fucking A, that's deep.

The whole album maintains that high level of wordplay and perspicuity. "We Take Care of Our Own" is about how we don't really take care of our own anymore. "Where's the promise/from sea to shining sea?" he asks, because you can never have enough songs mourning the passing of America's constantly regenerating hymen. Springsteen's innocence, too, seems charmingly unbreakable. All the way back on Born in the USA he was triumphantly shouting tired patriotic tripe over fist-pumping music only to undermine it with fairly obvious caveats when he got away from the chorus. (That conservative pundit George Will and then the Reagan campaign misunderstood Springsteen’s intentions only helped sales when the New Jersey hero spelled out the song’s anti-Vietnam theme to the media.) The result was huge mega-hits because everyone loves triumphant bellowing, and the few people who don't applaud the caveats. The only downside is that it's utterly ineffectual as protest. But a couple of decades in, Springsteen hasn't figured that out, no doubt because of the purity of his heart, or possibly, because he's been distracted by raking in the gobs and gobs of cash.

But what the hell, I don't begrudge him his wealth. I just wish that he could support himself in the style to which he is accustomed in some other profession—maybe as one of those robber barons he (of course) majestically decries in "Death to My Hometown"? I hate Wall Street as much as the next Occupy sympathizer, but at least for the most part the salivating financiers and malevolent hedge fund vampires who rule over us are willing, eager even, to suck our life-blood quietly.  Springsteen, on the other hand, insists on taking the music of oppressed peoples—African-American gospel, traditional Irish, blues—and rolling it all together with the proportional subtlety of a herd of bilious ungulates.

I appreciate Springsteen's concern for my bottom line, and, in the spirit of helping him help me I offer the following earnest, heartfelt advice. Boss, if you want to lift my oppression and my standard of living simultaneously, then please, at long last, shut up.