The Return of Skrillex

In all his frenzied, partying glory. 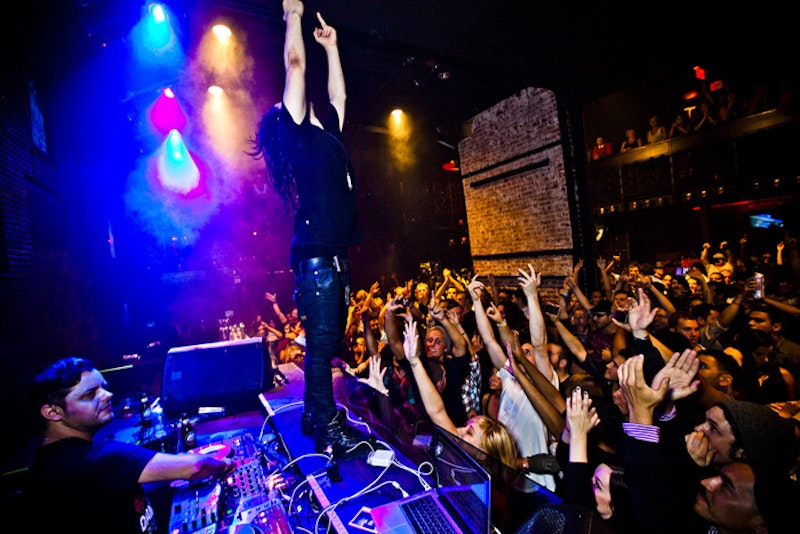 Brace yourselves: Skrillex is going to be with us for a while. Get used to the haircut, the bass, and the parties. He’s self-sustaining: what Skrillex is selling isn’t disco, and he doesn’t need Grammys to stay relevant or profitable. Skrillex isn’t a musician so much as an auteur of good times. He’s a ravenous workaholic, takes no vacations, and lives the party day and night that his dirty, chaotic, and vividly colorful dubstep comes from. Skrillex became a pop star by putting on a good show and giving people something fun, new, and exciting to do, not through puppet-master management, hit songs, or awards.

This Rolling Stone profile follows the producer born as Sonny Moore around L.A. and its environs for a week. Two things you notice right away: Moore’s dedication and relentlessness, and a Pollyanna-like optimism and willful ignorance when it comes to topics like life after death, getting sick, and having kids. "If I woke up tomorrow, and I knew there was nothing else at the end, I'd think, 'Then why am I more significant than the shit she wiped off her ass this morning? Or what difference is there between me and a stuffed animal? Or what makes a serial killer or a rapist wrong?'" There isn’t a difference: No one is more significant than a paper bag or an empty beer bottle, but you construct your own meaning, significance, and maybe figure out some of the confusing and perilous parts of life. Skrillex’s music is not about that. It’s ignorance as bliss; stick your fingers in your ears and drone “lalalalala” until everyone stops talking about gas prices and warm winters. Never underestimate peoples’ desire to be distracted.

Skrillex will be around for years because he sells wild parties before albums. He’s an orgasm auteur. Everywhere he plays becomes an instant bacchanalia gushing with drugs, drink, and date rape. The party’s about not thinking, it’s for obscuring your responsibilities and reaching for a pure, clean moment of euphoric consciousness, when you feel attune to every intricacy of the universe and your mind is wide open. You haven’t reached nirvana, but you might trick yourself for a few minutes. Skrillex should be applauded for his hard work: this is his day job, and he lives that perpetual overstimulation every day for us, to get closer to becoming a psychedelic wizard of celebration. And he’s doing a fantastic, thorough job of it. But is Skrillex a musician? He’s more like a carnival barker, a Siegfried and Roy for tripping kids. The sounds Moore uses are all crystal MDMA versions of themselves, but they’re more interesting and enjoyable separated then meshed together in the hellish hedonistic swirl of a typical dubstep song. He makes new music day and night on his laptop, and isn’t obsessed with starfucking or wanking off. But for those of us not at the party, Skrillex releases are as tonally aggravating and post-enjoyable as Moore’s old screamo band From First to Last. Skrillex is supremely talented at throwing parties, but good times don’t last—quality work remains over time. He’s a joke in many minds now, but the elements and the discipline are there for some kind of masterwork in a few years, whether we like it or not.