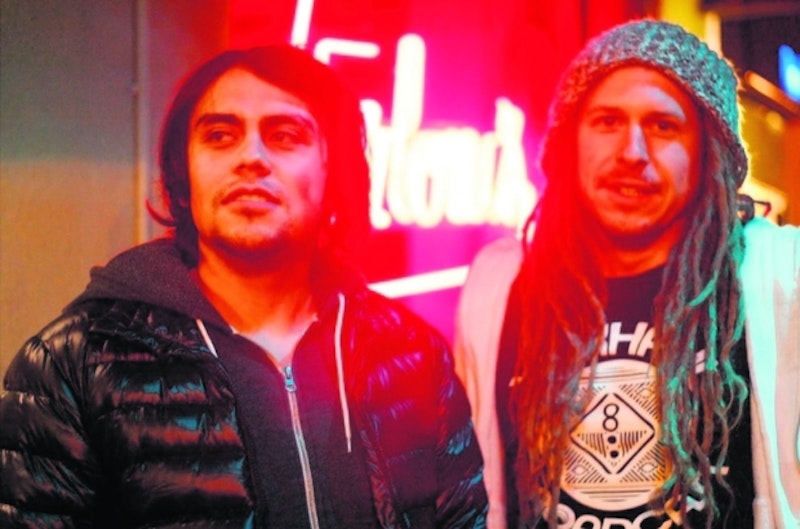 Fresno’s Strange Vine should be one of the biggest bands in the world. There’s quite a few bluesy two pieces around right now—Black Keys, White Stripes, Tweakbird, and several others. I like these bands, but Strange Vine is on a completely different level.

Fresno, and California’s Central Valley as a whole, is a place that will eat you alive. Gnarly pollution and crime, suburban sprawl like you’ve never seen, staggering unemployment, and oppressive heat—Fresno isn’t a vacation destination. Over 500,000 people live here, but it usually feels more like a shitty small town than a city. Cool things do happen in Fresno, but more often this place is dead. Wandering through the empty downtown streets at night, you can almost believe that Fresno is a ghost town.

Amidst this decay, I’ve seen some amazing bands—people who use Fresno’s wellspring of space and time to hone their craft, becoming enveloped in their music without having to worry about finding a practice space, as well as other problems and inconveniences that bands in dense cities have to deal with. I can’t think of a better example than Strange Vine.

Ian Blesse, who has dreadlocks down to his ass, simultaneously plays drums, an old school Fender Rhodes keyboard, and sings. Throughout most of Strange Vine’s songs, he pounds his drum kit with his right arm, executing fills and beats that would be hard to play with both arms. He plays the Rhodes, which he uses to create a vaporous mix of sub-bass reverberations and high-pitched eeriness, with his left hand. Somehow, he’s able to top all this off with weirdly pretty vocals that evoke John Prine, Dead Meadow, and Neil Young. Far from sounding gimmicky, Blesse only plays what each song needs, although it would be easy for him to show off if he wanted to.

While Blesse creates a world of sound, Toby Cordova crafts the atmosphere. Playing electric and acoustic guitars, he transitions from sparse folk into filthy blues—sounds that conjure the dry yellow hills where he and Blesse grew up. Cordova and Blesse share vocal duties, often harmonizing with each other. Their songs are catchy in the best way, latching onto your brain for days after a show. They have one full-length, Ghosts, out. My only complaint about the album is that, like so many great bands’ recordings, it pales in comparison to their live shows.

I first saw Strange Vine two years ago, during my first summer in Fresno. People told me that it would get suffocatingly hot in June, July, and August, but I didn’t understand how the Central Valley heat simultaneously consumes and drains you, turning your brain and muscles to mush. One afternoon, after more than a few days when I’d only went outside to run errands, my buddy called and told me to come down to Fulton Street Mall.

At this point, I hadn’t seen any Fresno bands play. Riding along the pedestrian mall on my bike, I heard a nasty, oddly-timed blues riff from a stage a few hundred yards ahead. Fulton Street Mall, built in the 1960s, started to get neglected once indoor malls opened up north, closer to the suburbs. Today, Fulton Mall is a three-block esplanade with as many boarded-up storefronts as functioning businesses. It’s also the only mall I know of that allows bikes but not cars, which is cool. Within the next two years, though, a new road will cut through the middle of the mall, making it like every other pedestrian mall in the country.

Fulton Mall usually seems abandoned, a few crackheads and unemployed workers walking around and sitting on benches. On this day, though, a large crowd had coagulated, everyone soaked in sweat and basking in Strange Vine’s music. I could hear what sounded like a bass coiling around the drums and supporting the guitar, but there were only two guys on stage. When I realized that Blesse was covering keys in addition to drums and vocals, I couldn’t do much more than shake my head in awe and let my shoulders and neck move to the music.

In the shadow of old, looming buildings—all of which are more interesting than the streamlined boxes that comprise the indoor malls in north Fresno—Blesse and Cordova crafted and inhabited a psychedelic greenhouse, inviting all of us inside. I often feel isolated in Fresno. Jamming to Strange Vine with my friends and a crowd of people I’d never seen before, I could almost believe that this small city isn’t doomed.