Death Is at Your Door

Panda Bear blows away a crowd at the 9:30 Club. 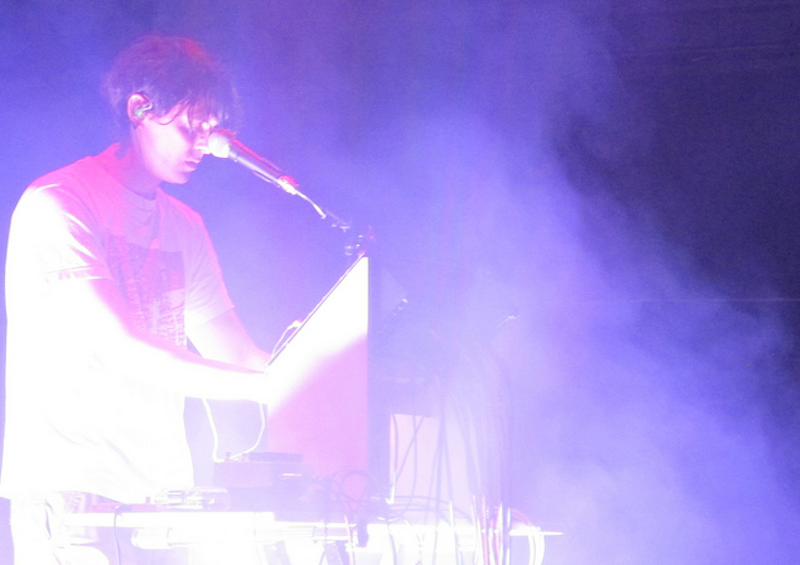 A couple of times before at Splice Today, I’ve called Animal Collective the Beatles of the 2000s, because their influence is everywhere and inescapable: gauzy and euphoric loops, droning chant-like vocals run through oceans of delay, percussion and body language that looks like the Dancing Plague. But my friend Mike Apichella, and many others, see them as the Grateful Dead of our time. Music aside—I haven’t jumped into that pool yet—the comparison makes much more sense. To their fans, the AC and the Dead are the center of the universe, but outside the bubble, life goes on. Like the Dead, the AC is easy shorthand for stoner jokes and inaccessible, drug-damaged music. Five and a half years after Merriweather Post Pavilion, the one that introduced the band to a world outside of Pitchfork’s orbit, things have settled. Like the Dead, they have their devoted following, and they’re not at all interested in chasing another semi-hit. So another record and tour from member Panda Bear (Noah Lennox) is business as usual.

Person Pitch, his 2007 LP, is second only to Merriweather in and out of the AC bubble. It doesn’t need an introduction. Arguably, it had even more of a Velvet Underground-type effect on the kids that heard it in middle/high school and saved up for Roland samplers and stocked up on Sam Cooke, Zombies, and King Tubby samples. And yeah... droning through a reverb molasses (thank god that’s receding). Expectations to follow up an “instant classic” dogged 2011’s Tomboy, a solid record whose reception even producer Sonic Boom described as “muted.” Tomboy traded its predecessor’s vivid oceanic sound for something more pristine and smooth: it sounds like porcelain.

In any case, you’re in a lose/lose in that position: same thing happened to Lennox’s main squeeze when Merriweather follow-up Centipede Hz came out with a whimper and was described by Pitchfork as sounding like “throwing a burrito at a windshield.” Music journalism is just another word for armchair musicianship, and I don’t know how anyone in his/her right mind would want to write exclusively about music. They do more harm than good—writing for themselves and friends—and tilting opinion and confidence in artists and fans on late Sunday night deadline inspired whims. But lamenting two records’ relative dismissal surrounded by years of top notices is a bit like making a story out of Vince McMahon losing $350 million in a day. He only has $750 million left—what a tragedy!

The slate will be polished whenever Panda Bear Meets the Grim Reaper is released. Lennox is currently touring the States playing his new songs exclusively, conceding only with an encore of three Tomboy songs: “Last Night at the Jetty,” “Scheherazade,” and “Surfers’ Hymn.” His main set was entirely unreleased Grim Reaper material, 10 or 11 songs in all (though he has more in the can, two albums worth apparently. There’s already been a wonderful B-side released, “Cosplay,” otherwise known as “Marijuana Makes My Day”). I went to the tour’s opening show at the 9:30 Club, nearly sold out, no gawkers and fair weather fans, all heads. That’s what it felt like: walking in and waiting for Minister Lennox to emerge and say a few words (just “Hey, thanks so much. I hope you like it.”). It felt like going to church: a friend of mine said he felt baptized afterwards.

In an hour, Lennox created and deconstructed what I can only describe as chamber music: elevating, ecstatic sculptures in sound with his beautiful choirboy voice cutting through it all. The new songs are more colorful and driving than the arid structures of Tomboy and the loose, languid Person Pitch. They feel monolithic and grave—it’s hard to understand anything but a few strands of lyric, but all of the songs are imbued with death and melancholy. Phrases like “can’t come back,” “is this the last time?” and “any minute now” recur, and the whole set felt like a sermon. Some tunes, like the minimal harp and voice-based “Can’t Go Back” (that’s a fan-generated title), felt like a eulogy. The Grim Reaper material has been described as dancey and more upbeat, but there’s a dark undercurrent, and the way Lennox has structured his set forms a really powerful narrative. The new songs cycle through the various stages of grief, finally reaching “Acceptance” at the very end, with a THX-esque full-frequency siren drone, a death rattle, and then silence.

I’ll listen to anything by the four members of Animal Collective until they’re gone or I am. I’ll hold off on real scrutiny of these songs until the record comes out: but they were deeply moving, in a way that I can’t really make sense of, four days later. Without a reference recording, I’m left only with a couple videos I shot and scattered, vague impressions of what went into that hour-long gospel: the dirgey organ-based opener, the song with a hook I just can’t shake, and that sand-blaster ending. Saying nothing, with few discernible lyrics, Lennox made us feel holy. Those outside the bubble still might not care when Grim Reaper is released, but everyone in that room went quiet, felt elevated, and saw God.