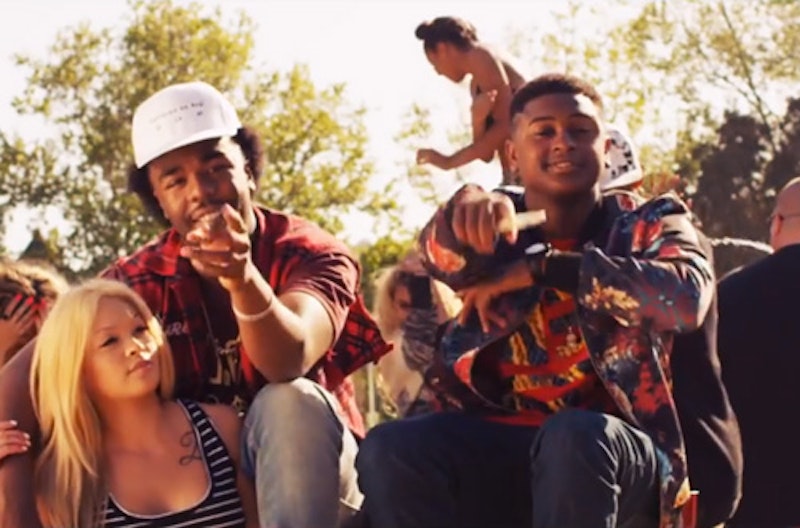 Musical templates provide artists with a shortcut as well as a uniting principle. Building from a blueprint, young musicians can quickly produce sounds that already have a measure of pre-approval. And a group of young artists pulling from the same playbook makes a scene, which allows for mutual support and cross pollination. But once a template is in place, the ways artists stick to it quickly become less important than the ways they stray from it. This is what separates two recent releases from the Bay Area: the major-label debut from rapper Iamsu, Sincerely Yours, is less exciting than Fake I.D., the new mixtape from R&B singer Derek King.

Iamsu (Sudan Williams) helped found the Heartbreak Gang (HBK), a group of artists—mostly rappers—that’s steadily picked up steam over the last several years. The best-known HBK product outside of the Bay is probably Sage Gemini’s “Gas Pedal,” which made it to #29 on the charts and included an Iamsu verse. Indirectly, the sound Iamsu promotes has contributed to other national hits. The rapper suggested in a Fader article that the LA producer DJ Mustard stole the Bay Area sound. “Some people out there are influenced by us but don’t really want to say it.” In reality, as Iamsu freely admits, both Mustard and Su are swiping from a previous generation. “If you look at how Too Short’s ‘Freaky Tales’ [from 1989's Born To Mack album] sounded,” Iamsu noted, “it’s the same [as] a Mustard record or a record I’d produce… the same elements.”

Take these elements, what Iamsu calls “moody bass” plus “that 808,” throw in some rhythmic shouts, and you get the template for his first major-label full-length. “Only That Real,” “I Love My Squad,” “What You Bout,” and “The Weather” all work in this mode. A few songs buck the trend: most prominently “Stop Sign,” which augments the formula with live guitar licks and a series of rising synth tones that bring to mind Kraftwerk.

Matching the relatively monotone beats, Su doesn’t display many distinguishing characteristics as a rapper. He’s “tangled in a web called fame and its pursuits,” but other rappers are better at dissecting that web. “When I see green I go,” the refrain from “Stop Sign,” touches on both E-40’s 2006 hit “Tell Me When To Go” and “Gas Pedal.” The rapper E-40 appears on “T.W.D.Y.,” along with Too Short. Both men have been Bay Area fixtures since before Su was born, and you can tell—they have a presence. E-40 drops a line about his Grandmother’s toe that instantly sticks in your memory.

Part of Iamsu’s strategy for success is to make himself near ubiquitous on West Coast releases, so he shows up to boost “What It Do,” one of the stronger songs on Derek King’s first mixtape, Fake I.D. The video for the song features super-soakers and sunshine, which is approximately what the beat sounds like. Although Iamsu’s rapping is saccharine, his energy and cosign are assets.

King doesn’t ignore the Bay’s template—on several tracks, like the unremarkable “No Games,” he is singing over a beat that could appear on Iamsu’s album. But, perhaps because he is an R&B singer instead of a rapper, King adds flourishes and upending the formula. “Teasin’” employs a live bass, high in the mix, along with flashes of harmony; “Good Girl” sounds like doo-wop reimagined for the 21st century.

While King doesn’t innovate melodically to the extent of artists like Ty Dolla or Future, surprises still play an important part of his appeal, and he refuses to fade beneath the template. The hook to “Foreign” comes out of nowhere, and it’s stronger than anything on Sincerely Yours. At one point, King even interpolates Oasis’s “Wonderwall.” It’s a mistake, but it’s different.

If you look at the current Atlanta rap scene, the blueprint-defying, hard to classify rappers—Young Thug or Rich Homie Quan—are the ones getting songs on the radio and ink from major publications. The quality of Iamsu’s releases may not be as important as his ability to glue together a large group of artists. But incorporating people like King will be essential for his group’s longevity, as well as HBK's ability to succeed outside of the Bay Area.