Give Me That Classic Country Sound 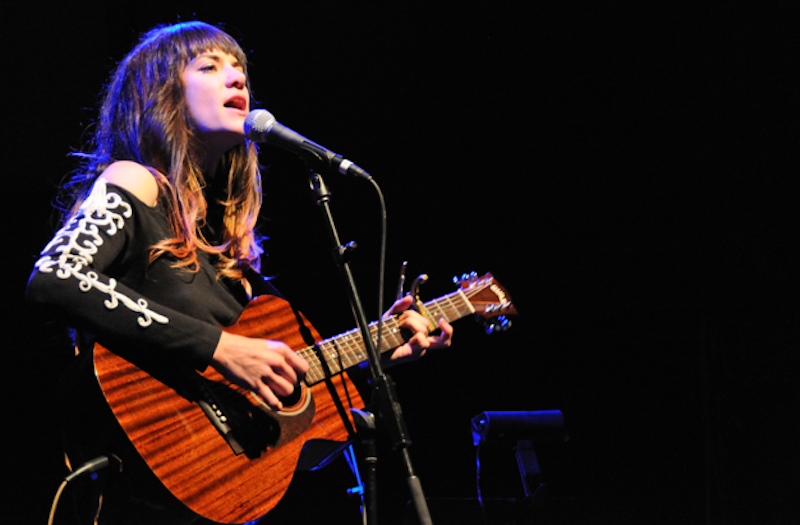 A lot of country music these days is blending closely with different strands of pop, making a strong play for crossover. Florida Georgia Line does some rapping; Keith Urban uses the most up-to-date production. The singers Nikki Lane and Sturgill Simpson, both releasing their second albums, haven’t gotten this memo. They remain enamored with an earlier time in the genre’s history. This earns them friends in unexpected places—Pitchfork shockingly reviewed Simpson’s album, while Rolling Stone did a write-up for Lane—and simultaneously ensures that they won’t get played on country radio.

Simpson titled his new album Metamodern Sounds in Country Music, which is a joke, since this doesn’t sound modern at all. (Supposedly it’s a reference to an early 1960s record from Ray Charles, Modern Sounds in Country Music.) But Simpson sees his revision of thick 70s honky tonk as a radical act. In a culture of striving and scrapping your way to the top, he’s choosing to sit things out. His disgust with the system translates into ignoring any attempts at sounding modern—he burrows into the legacies of Waylon Jennings and David Allan Coe and wraps them around himself like armor.

Simpson’s stance becomes apparent quickly, especially if you compare him to someone trying to become a fixture in the country establishment. A good bench mark for contrast would be Frankie Ballard’s hit “Helluva Life,” where money just keeps adding up and everyone always has enough to get by. Simpson has different ideas. “Time and time again Lord I keep going through the motions,” he sings on “Living The Dream,” “a means to an end but the ends don't seem to meet.” He continues sarcastically, “Ain't no point getting outta bed if you ain’t living the dream.” Most damning of all, there’s no salvation on the way. “That old man upstairs, he wears a crooked smile/staring down at the chaos he created/said son if you ain't having fun just wait a little while/momma's gonna wash it all away/and she thinks Mercy's overrated.”

“Living The Dream” may not even contain the most serious sentiment expressed on Metamodern Sounds. Simpson declares on the first track, “Turtles All The Way Down,” that “love’s the only thing that ever saved my life,” but “Life of Sin” tells a different story. Now he’s post-heartbreak, settling into crippling patterns. “[E]very day I'm smoking my brain hazy/all I can do to keep from going crazy/but the paranoia is slowly creeping in/I keep drinking myself silly/only way for this hillbilly.” That paranoia bleeds onto “Voices,” where Simpson sings, “How I wish somebody'd make these voices go away.” The album’s final words suggest release only in death.

He locks in a sound to match his lyrics. “Life of Sin” is so ragged it’s almost a demo. Throughout the album, the cymbals hiss and the guitar is high in the mix, chopping and spurting and soloing freely. “The Promise,” an 80s cover that sounds like it should be a country standard already, might be the only track where he steps into a different lane. It pulls in a string section and magnifies every little ache and crack in Simpson’s voice. He could record a magnificent album of love songs if he felt the urge.

While Simpson is mostly single-minded in his outlook, Lane’s All Or Nothin’ shows an artist more willing to compromise, both in her topics and her personnel choices, which include some mainstream figures. The album was recorded with the help of the Black Keys’ Dan Auerbach, who’s had a busy year so far between the new Black Keys album, feuding with Jack White, and producing Lane and Lana Del Ray. One song also sports a co-write from Luke Laird, a songwriter and producer firmly embedded in the Nashville power structure. But Lane’s sound still exists a long way from the airwaves. Few ladies get country radio play in the first place; those who do, aside from huge names like Carrie Underwood and Miranda Lambert, tend to be rocking with vigorous, up-to-date hooks—see the Band Perry’s “Chainsaw” and Sara Evans’ “Slow Me Down.”

Lane’s music ignores current trends, choosing instead to roam over iterations of sweetness from the 60s and 70s. “Good Man” employs the famous Ronettes beat; “I Don’t Care” sits midway between a strum and a groove; “All Or Nothin’” rides a fat bass sound that owes plenty to Muscle Shoals. Auerbach duets with Lane on “Love’s On Fire,” which approximates both Little Feat’s “Roll Um Easy” and a folk-rock sing-along. Lane’s voice roams like her tunes. Sometimes she sings high and polished, sometimes a little rasp creeps around the edges. Although she touches on the work of older country singers like Jessi Colter, she also channels newer voices—folk-leaning singers with indie followings, like Neko Case, or Zooey Deschanel’s work with M. Ward.

There is no old man upstairs with a crooked smile in these songs—Lane is focused on worldly desires. She’s slighted on “Good Man” by a fellow who “come[s] home late,” drunk, and claiming he “made a mistake.” Later in the album, Lane tells her partner to “ma-ma-ma-man up.” If he doesn’t follow her advice, the sequel might well be “Sleep With A Stranger,” where she suggests, “Tonight would be a good night to sleep with a stranger/maybe a cowboy, maybe a lone ranger.”

Simpson’s doomed outlook eschews the comfortable mood that prevails in country. (On his first album, High Top Mountain, he may have done this better, aided by an occasional joke and the knowledge that things can get worse.) Lane’s brand of defiance is more about sound than attitude. But both these singers stand to benefit from country’s pop-yearnings: rebels actually do need a cause. Without the contingent aggressively looking to storm bigger markets, these two might not have a position to articulate themselves against.