Stones For Sale, or I Can't Get No Satisfaction

When Mick Taylor left the band, the decline began. 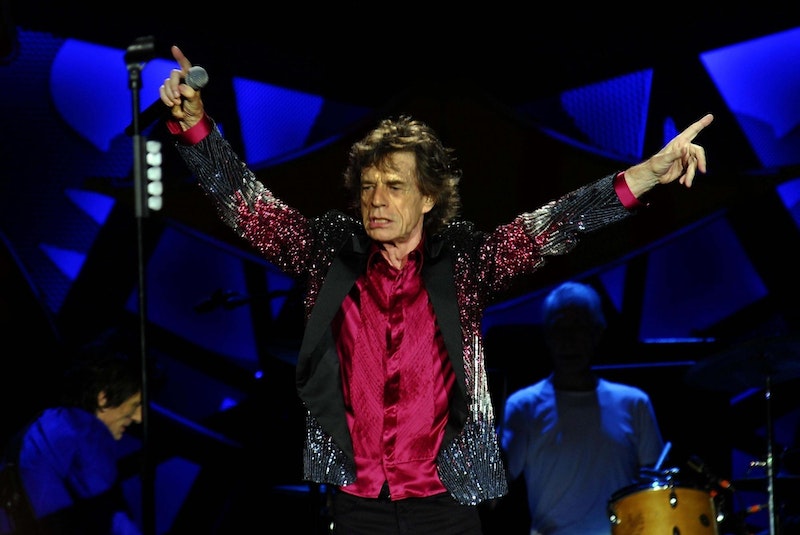 I was a huge Stones fan growing up, beginning with the Brian Jones era. "Satisfaction" got me started, even though I was such a musical novice that I thought the song opened with a saxophone; I’d no idea somebody had invented fuzz-tone. I still remember the first times the Stones "spoke" to me. It was the lyrics to songs like "Mother's Little Helper,” "Sitting On A Fence" and "19th Nervous Breakdown."

I was 13, then 14, and we were poor, 14 of us kids living with mom and dad and all I really wanted was to live on an iceberg somewhere. One day, I found a transistor radio resting in the gutter, and turned it on. "Get Off My Cloud" had just been released, and it came thin and metallic over the two-inch speaker. This was my Confirmation, much more so than the hollow religious ceremony I’d recently undertaken. This was the first time I'd ever thought about something on the radio being beamed specifically at me. In a house with at least 20 rooms I still didn’t have my own bedroom, or any sense of privacy. I realized, with that one song, how badly I wanted to escape, to be by myself. I taped the radio to my handlebars and would ride around aimlessly, waiting for the song to come on again.

Several of my gang members went to see the Stones at Boston Garden during the 1969 tour. I blew my chance to join them, because I'd embarked on a failed and shameful attempt to get to Woodstock earlier that summer, to see Hendrix. I was pretty much grounded for eternity after that. But now, after many decades of reflection, I'm glad I never made it to Yasgur's farm. I wasn’t prepared for the drugs, rain, mud, or even the sex. Woodstock would’ve turned me into a zombie. Worse than being grounded and missing '69 was my buddies regaling me with stories of the Stones show. Because, let's face it, in 1969 the band just hit their peak. We somehow acquired copies of the "Live'r" bootleg, one of the first concert recordings ever available. Mick Taylor had replaced Brian Jones, and the band now had a genuine lead guitar sound.

The first time I saw the Stones was in Boston in 1972, during the notorious STP tour. We sent away for tickets in the mail. I think they were $8.50 or so. There was no TicketMaster back then. When my allotment (two ducats for each show) arrived at my place, I wrapped them in tinfoil and stuck them in the freezer, in case my apartment burned down.

We were about 30 rows out, almost center stage. The Stones had been arrested in Rhode Island, and the Boston mayor, Kevin White, had to call and get them released. They finally got on stage around one in the morning. They were mostly playing songs from newly-released Exile On Main St. The bit I still remember most fondly is the opening guitar riff on "Tumbling Dice." I was awestruck. For the final three songs, older classics, the house lights came up full, as if for a Celtics game. And there were the Stones, still on stage, in real life. A huge Mylar mirror hung from the rafters, pivoting back and fourth so the crowd could see itself. This was not a dream after all, as I proved to myself the next night at the second show. The songs, the clothes, the hair. I was hallucinating greatness on the ride home. Those Stones shows gave me a belief in untold possibilities. I wanted nothing more from life than to be Keith Richards. I bought all their records, many bootlegs, and talked my way into scoring all the record store promo stuff as each album came out.

The day in between those two shows corresponded to my army physical. Since my draft number was so low, they were starting to process me for a possible trip to Vietnam. My attempt to fail the physical didn’t fly, and I went to the second Stones show with dampened spirits. For all I knew, I might be in combat boots overseas in a few months.

I was a changed person after seeing that band, and only then could I properly rebel. Within two months I’d passed my physical, burned my draft card, changed my name, and fled the East coast in a borrowed car (I'd traded my own car for an electric guitar like Mick Taylor's).

By 1975 Taylor had left and Ron Wood was the replacement. We had many arguments about that change. Should it be Jeff Beck? Nils Lofgren? I can't say that the magic was gone quite yet, but I could see decline setting in. The huge inflated phallus Jagger mounted during "Starfucker" was the first uncalled-for gimmick. Then there was Wood, who’d never fill Taylor’s shoes. Still, I went to both shows because I hadn't yet been willing to enter recovery. Those tickets were maybe $15.

I don't remember much about the 1978 tour because the Stones skipped Boston. I "probably" would have gone, because my addiction was hard to kick, and also because "Shattered" and "When The Whip Comes Down" were, although I couldn't know it at the time, among the last of the great Stones tunes. I wasn’t blown away. The last Stones show I ever saw was in 1981. The stage set had been sterilized, not even cords connecting the guitars to the amps. Jagger rode a cherry-picker over the crowd. It was the beginning of "Mick Jagger and the Rolling Stones." Little did I suspect the parody they’d become. I probably paid $25 bucks for that show.

These days I think back to Beggar's Banquet, Let It Bleed, Exile, Ya-Yas and Sticky Fingers and realize that I was the right age to see the Stones during their peak. When I saw Martin Scorsese's film Shine A Light, I came away depressed, wondering why he hadn’t filmed the Stones in 1978 instead of The Band with The Last Waltz.

I feel sorry for my younger friends who saw the Stones in the 2000s and later, proclaiming it the best show they'd ever seen. Maybe they didn't get out much. To them, Jagger was the ultimate showman. Really? Because he can do jumping jacks? What about Prince? Bowie? Jackson? How about Bjork? David Johansen, anybody? For that matter, why did the Stones even require a front man? None of the other bands from that era seemed to need one: Led Zep, Cream, The Who, Kinks, Blind Faith...

The bigger problem for me was that Mick Taylor had turned me into something of a guitar snob. He added such a blues-oriented sound to the Stones that I've not gotten over it. In Wisconsin last year I scooped up a bootleg from the 1973 tour in Europe. I'm a big believer in Mick Taylor solos. The vibrato, the tone, the clarity. Fuck Clapton and fuck the shredders. Taylor had few peers.

Today, the prices for Stones tickets at my local stadium, Foxboro, this summer vary from $150 to about $2100. I'd have to sell my car. From the floor plan, I can't tell if they are selling seats behind the stage or not, but they’re laid out and numbered on the website. Nicky Hopkins is dead. Bobby Keys is dead. Taylor’s gone. Bill Wyman, whose name I took when I went underground, is gone. Jagger can't sing. The Stones have become corporate money-grubbers living off their long-gone glory days. You’d think that, after 50 years of guys like me buying their records and going to their shows, helping them amass millions, that they’d give one free tour. Cocksucker Blues indeed.

But it doesn’t matter: if they were playing on the hood of my car, I probably wouldn’t open my eyes.