Mac DeMarco ends his tour in D.C. to sing-a-longs and the devotion every 24-year-old dreams of. 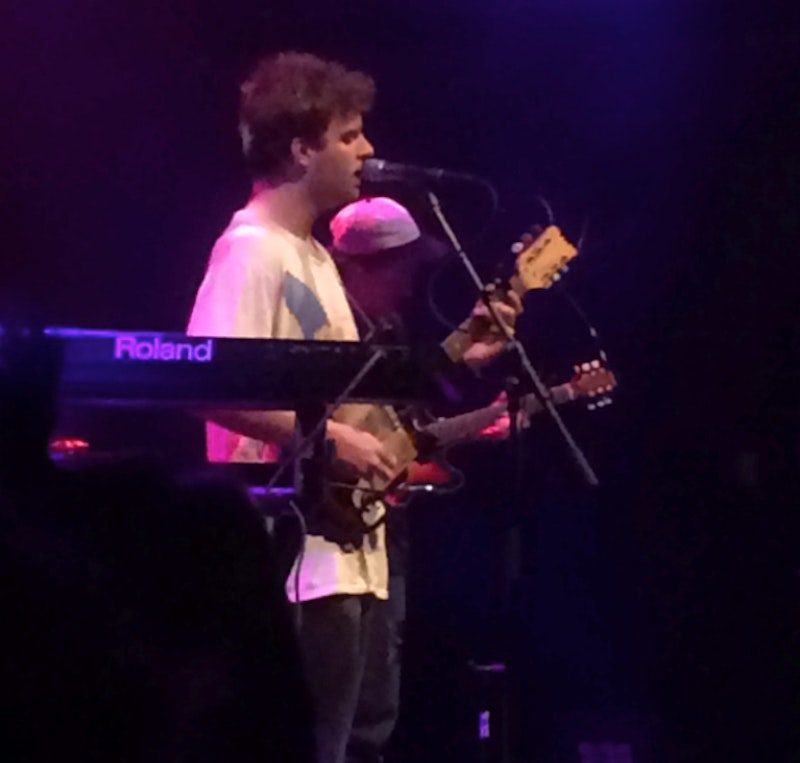 The sold-out crowd sang along loudly to every word to every song, swaying, embracing, moshing, crowdsurfing, doing miniature waves, and actually pulling out the lighters for their glorious Coldplay cover, “Yellow.” Dozens of cigarettes were thrown on stage during “Ode to Viceroy.” It was crazy and great. Mac DeMarco is just another example of respecting one’s audience. That Gen X fake reluctance to fame is completely dead. If you disrespect your fans, jerk them around, give them a hard time, or fail to pretend you even give a shit, that you’re not punching a clock, half of them won’t be there for your next album. Most of my friends who don’t dig him don’t get why such a normal dude with more breezy pop songs is a minor sensation. DeMarco is a cartoon character, and he loves it, and feeds on it. It’s probably not far from how he feels as a person, which makes for a good rock star.

He came out on stage and screamed “WAZZZUP????!!!!” to hysteria—two songs later he was leaning into the front row, guitar aloft, tongue wagging, shredding. This show had the same positive feedback loop between an enthusiastic performer completely in control and a rapt, knowledgeable crowd of the amazing of Montreal gig I saw at the Ottobar in May, but DeMarco’s music doesn’t hit the spot the for me the same way Barnes & co. do, or Ariel Pink for that matter. The concert blended together—purple and blue-flanged guitar leads, gauzy synths, and DeMarco’s soft, low croon. The encore—Metallica’s “Enter Sandman”—went on for about 15 minutes, with band members switching instruments and friends and touring mates jumping out in the crowd. If you can’t see DeMarco’s appeal, then you’re just not paying attention. It’s the James Bond thing: women want him, men want to be him, or at least hang out with him and smoke a bowl or something. That’s the kind of scene going on here. He’s your older brother, your weirdo friend, your cool boyfriend. His personality is as responsible for his popularity as his music, and he’s killing it.