Does the string of new singles mean LP five is on the way? 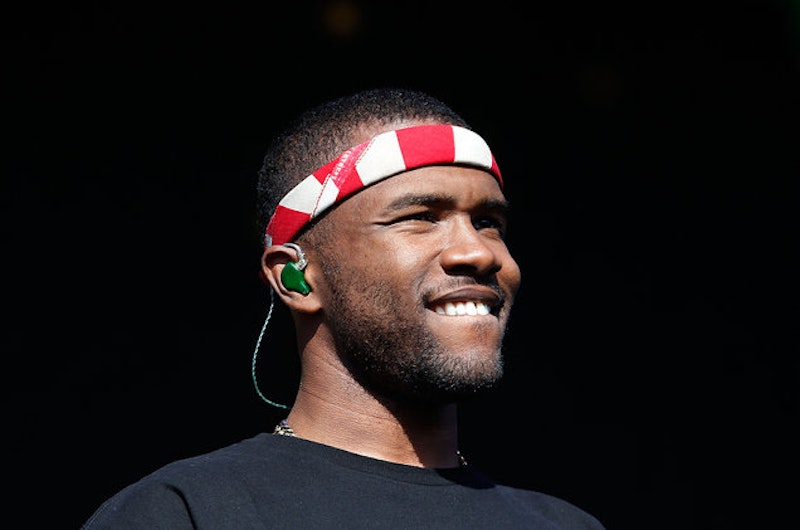 Frank Ocean's newfound independence has dovetailed with a sudden and surprising prolificacy. His ubiquity over the last eight months has transformed perceptions and expectations: Ocean was fading into mythic status after releasing scant material following his commercial breakthrough channel ORANGE and missing his self-imposed July 2015 deadline for the album then known as Boys Don't Cry, causing panic over the possibility of him becoming a Lauryn Hill or pre-2014 D'Angelo-type figure. His sound, too—which used to exist firmly at the forefront of the pop/R&B realm—has evolved into something amorphous and consistently surprising. Blond(e) initially bewildered many listeners with its general airiness and dearth of percussions, inspiring myriad variations of the question, "Did Frank even finish the album?" Endless, Blond(e)'s enjoyable but comparatively slight sibling, was ignored once people realized that the individual tracks would not be released any time soon; is listening to "Higgs" really worth the risk of resurrecting sixth period woodshop traumas?

But Blond(e) revealed itself after multiple plays, and while not as front-to-back consistent as channel ORANGE, it far outpaces the latter in terms of establishing mood and atmosphere. It also contains some of his best tracks: "Nikes," "Ivy," "Self Control," and "Nights" combine his pop instincts with his more recent experimental interests. These qualities are what make Blond(e) his Kid A; like Radiohead with guitars, why would Ocean obscure the main element that made his music so distinct—his natural voice—and distort it with autotune? Because he knew what the future sounded like.

Then, before even the impatient fans of the Internet-age could start whining for new material, Ocean released "Slide," a collaboration with Calvin Harris and Migos. Harris might claim front billing, but the song belongs to Ocean: he handles the first verse and hook, and sets the thematic and melodic tone for the rest of the track. I assumed "Slide" was a one-off—a commercially-skewed victory lap after Blond(e)'s widespread success—but "Chanel," probably the best song of his career, soon premiered on his Beats 1 show, blonded RADIO. Its alternate version, featuring A$AP Rocky, reinforced his recent mantra: "I got two versions. I got twooo versions."

The next episode of blonded RADIO featured "Biking," a collaboration with Jay Z and Tyler, the Creator. Again, Ocean guides his collaborators by establishing a central metaphorical motif: the wheel as a cycle. This level of cohesiveness in imagery in rarely seen in hip-hop, and it redeems Jay Z's characteristically-underwhelming guest verse, even giving it an epigraph-like quality. The deep-voiced Tyler, who will never approach the technical proficiency of his peers, provides the perfect foil to Ocean's unadulterated croon. The song's peak—and the primary aspect that makes it remarkable—comes at the end, when Ocean devolves into indistinguishable Young Thugian yelps, most clearly indebted to 2016 standout "Drippin."

Ocean aired two episodes of blonded RADIO this week and, as he has in the past, premiered new songs at the end of each. A pattern has formed! "Lens," the first of the two, sounds like a more contented take on the cold isolation of Kanye West's 808s & Heartbreak. It's possibly his most gorgeous ballad since "Bad Religion." "Slide on Me," which debuted Monday morning, is a Young Thug-assisted remix of the Endless track, stoking the possibility that the whole visual album will be repackaged into something more consumer friendly.

What do all these new songs mean? Is Ocean prepping a new album, revealing it track by track? Are some of these loosies, and he's building hype for LP5 à la Kanye West's 2010 GOOD Fridays campaign? Or is he sharing each song as he makes them, with no complete project in mind?

Who knows, although I doubt it's the latter; Ocean is too much of a perfectionist to work without a plan. And if not necessarily connected to a unifying project, these songs are certainly linked by an era, recorded recently: they fuse the experimental tendencies of Blond(e) with the immediacy of contemporary trap music; besides, they're too good to be B-sides.

For now, all we can do is speculate and hope that he keeps airing episodes of blonded RADIO.