Liz Durette's Delight is a gem. 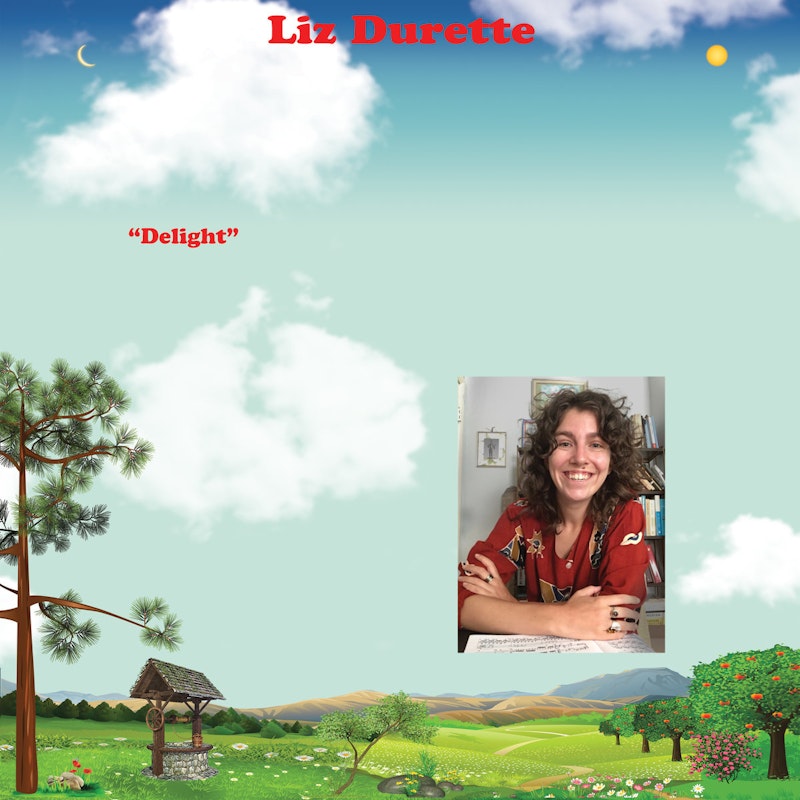 When male crickets want to seduce their female counterparts, they use a call commonly known as the chirp from a process scientifically known as stridulation. The crickets’ front wings rub together to amplify a high-pitched chirp. Though chirps may all sound similar to the untrained ear, distinctions vary depending on the speed that the scraper and files are rubbed together and the individual morphological make-up. The sequence and intensity of each pulse rely on the amount of teeth the cricket uses, as well as the speed and velocity of the stroke. Every chirp has its unique place in the world.

Limited to 250 copies on Feeding Tube Records, Liz Durette's new LP Delight properly translates the mating calls of crickets into a grand movement, built up of modern classical waltzes and suites that frolic gently, wandering through crisp neon forests. Cedar and pine trees drip dew from garnished leaves onto fresh soil. Clouds sift through the blue sky like feathers, observing the fields of bright green. After the sun sets, crickets rise from their burrows, surrendering their sounds to the wondrous world. Angels and demons come together to hold hands and twirl to the wild melodies of the evening.

Improvised on a polyphonic expressive keyboard, the songs were recorded in January 2019 in the outskirts of Baltimore County at the Pony Moon ranch. The tracks were mastered by Baltimorean Jeff Carey before the crickets carried him away into the night. The album winds and swerves through mountainous mazes, pitch-shifting themselves into culminations of hell-bent nuances, warping in and out of comprehension. Noise, musique concrete, and classical influences help form this piece, but none of these titles fully describe the sounds.

Delight is a departure from Durette's previous release, Four Improvisations. The playing is somewhat similar in circus-like demeanor, but the polyphonic keyboard gives the music a new meaning. The sounds heard are wonky and unbalanced. I feel like I'm walking across a tightrope carrying baskets of venomous hissing snakes. But the snakes are only as wicked as I imagine them to be. They could be my greatest pals or worst enemies.

Delight exemplifies fun melodies and harmonies that make you move and groove while still igniting the avant-garde vernacular. The album artwork, designed by Durette, reflects what the music sounds like. Durette’s glistening smile emanates in the corner of a grassy knoll. A well sits to the side. In the distance lurk brown hills and mountaintops. Somewhere you'd want to picnic.

This album is strange without attempting to be. Delight exists on its own platform and in its own universe.

—Purchase or stream the album here.