The Bells of the Crown 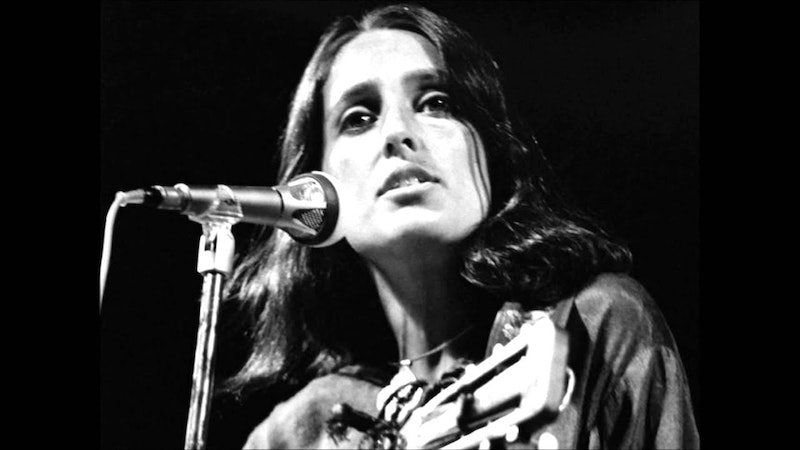 Joan Baez does a pretty good impression of Bob Dylan.

There’s a bit in No Direction Home, Martin Scorsese’s essential film about Dylan’s early years: Baez is sitting in her kitchen nursing a mug of coffee. She’s just been talking about her first impressions of Dylan. This was early on, when she was already a famous singer, and he was a ragamuffin just starting out. She says that everyone was raving about him, about how he was a genius who wrote all these great songs, but that she refused to listen, being far too self-absorbed at the time. But then she heard him sing and he was as good as everyone said he was.

Very soon they started a romance. He used to stay with her in a house in Carmel Valley, because he liked to write there.

That’s when she does the impression.

“What do you think of this?” she says, with a little bit of gruffness added, in imitation of Dylan’s voice.

He’s just handed her a set of lyrics. So she tries to figure the lyrics out and comes back with an interpretation.

“Hey, that’s pretty fucking good,” she says, in Dylan’s voice again, rocking her head from side to side, lips curling half way between a sneer and a smile. “See now, a bunch of years from now, all these people, all these assholes, are gonna be writing about all the shit I write. I don’t know where the fuck it comes from. I don’t know what the fuck it’s about, and they’re gonna write what it’s about.” And then she does an impression of his laugh, dismissively amused, ironically detached from the source of his own genius.

That’s an interesting insight into Dylan’s working method. It’s always been obvious to me that he wrote very fast and that often he wasn’t really thinking about what the words might mean. It’s got more to do with the sounds on the page, with the rhythm and the scan, than with the message. Occasionally they tumble into complete nonsense. But there are whole verses of sheer genius too, words that seem to resonate with your soul.

His lyrics aren’t like that. They’re more impressionistic than descriptive, more like dream sequences than a logical progression of ideas, more about the energy and drive needed to put these feelings into words than about what the words mean exactly.

So it is with “Farewell Angelina,” a song from the Bringing It All Back Home era.

I first heard the Joan Baez version on YouTube last year and was immediately charmed. I listened to it several times in a row, and then over and over again for a number of days. It’s hard to say what it’s about exactly, if it’s about anything at all. It may well be a poetic farewell to Baez herself. It was written for the Bringing It All Back Home album, his first excursion into rock, and there’s a rough recording of it by Dylan from the time (later released on one of Dylan’s “bootleg” series). The lyrics are a little different from the version Baez sings. It’s not quite the finished composition, a little cruder, lacking polish, with one extra verse that sounds like almost complete gibberish. It’s not clear why he never recorded it for release himself but gave it to Baez instead, but it’s the fact that he did that might incline us to believe that it was written as a farewell to his old flame.

They were breaking up around this time. Dylan had asked her to join him on his tour of the UK, and then very pointedly failed to invite her onto the stage with him. He was going electric while she was still a folk singer. He was at the cutting edge while she sounded old-fashioned by now.

The Scorsese film portrays her as this uptight square, looking awkward and lost, while everyone else is having a party. It’s obvious that there were a lot of drugs around; one or two sequences where it’s clear Dylan has just taken a line, as he touches his nose and sniffs and goes off into some eclectic rant.

She was a “straight,” more interested in politics than partying, more in tune with demos and sit-ins and changing the world than show biz. Meanwhile Dylan’s career was taking off into the stratosphere and he was surrounded with admirers. He was much too astute to stay involved in politics for long. That was the kiss of death in show biz terms, as Pete Seeger had already shown. Dylan referred to his earlier work as “finger-pointing songs.” It was like a bandwagon he’d stepped onto for a time, but then neatly stepped off once it had served his purpose. So he’d gone from the work-clothed imitation of Woody Guthrie, mythologizing his past, to someone who was the epitome of 1960s cool, hanging out with the Beatles, wearing Chelsea boots and button down shirts and gobbling amphetamines.

Baez didn’t make that leap with him. She was still caught up in the seriousness of the political world, thinking about civil rights and the other issues of the day, trying to drag the conversation back to something dull but meaningful.

Dylan’s lyrics had shifted into surrealism by then. This was the era of "Mr. Tambourine Man," which may or may not be a song about acid. “Take me on a trip upon your magic swirling ship,” certainly sounds like it could be. But it veers off into borderline nonsense too, into strangeness and uncertainty, into words that can be interpreted in countless ways. That’s part of the appeal, of course. It’s like an astrology column or an I-Ching reading, vague enough to mean almost anything.

So maybe that’s what “Farewell Angelina” is about. It’s a goodbye song to Joan Baez, laden with his newfound impressionistic imagery.

Here are the lyrics:

The jack and queen have forsaked the courtyard/Fifty-two gypsies now file past the guards/In the space where the deuce and the ace once ran wild/Farewell Angelina, the sky is falling, I’ll see you in a while

See the cross-eyed pirates sit perched in the sun/Shooting tin cans with a sawed-off shotgun/And the neighbors they clap and they cheer with each blast/But farewell Angelina, the sky’s changing color and I must leave fast

King Kong, little elves on the rooftops they dance/Valentino-type tangos while the make-up man’s hands/Shut the eyes of the dead not to embarrass anyone/Farewell Angelina, the sky is embarrassed and I must be gone

The machine guns are roaring and the puppets heave rocks/The fiends nail time bombs to the hands of the clocks/Call me any name you like, I will never deny it/But farewell Angelina, the sky is erupting, I must go where it’s quiet”

The song is visual as well as aural. He’s painting a picture. The bells are golden, as is the crown, as are the trumpets; the bells tingle along with the triangle, and you’re left with an impression of something mystical and golden calling to him, which he feels drawn to follow.

“The bells of the crown” is a beautiful line. It doesn’t mean anything in a literal sense. Have you ever seen bells on a crown? No. But if there were bells on a crown, maybe you’d be compelled to follow them too.

It calls to mind Kether, the crown from the Kabbalah: something beyond human understanding, something we all must search for. The table standing empty by the edge of the sea is a great image for the end of an affair: a place maybe where the lovers once met, now abandoned and lonely on the shoreline. But the song could mean farewell to a lot of other things too. His life is changing at this time. His art is changing. The world is changing. And he’s changing too, rolling with the changes.

I’ve read interpretations of the song that attempt to explain every line, but I really don’t think you should do this. There’s a cartoon quality to a lot of the images, and I think you’re supposed to visualize them just as they are: cross-eyed pirates, King Kong, little elves, tangos on rooftops and all. Maybe he does have some specific targets for these images but, since he refuses to explain them, we’ll never know.

This is what Dylan captures so wonderfully in this song, the sense of connectedness we had as children but have lost with age. The song allows us a glimpse into that world again. Maybe that’s the sound that calls him away, a sense of something in childhood that he’s lost but is looking for again. But as a farewell gift to the lover he must forsake, it’s about as perfect as we can imagine.