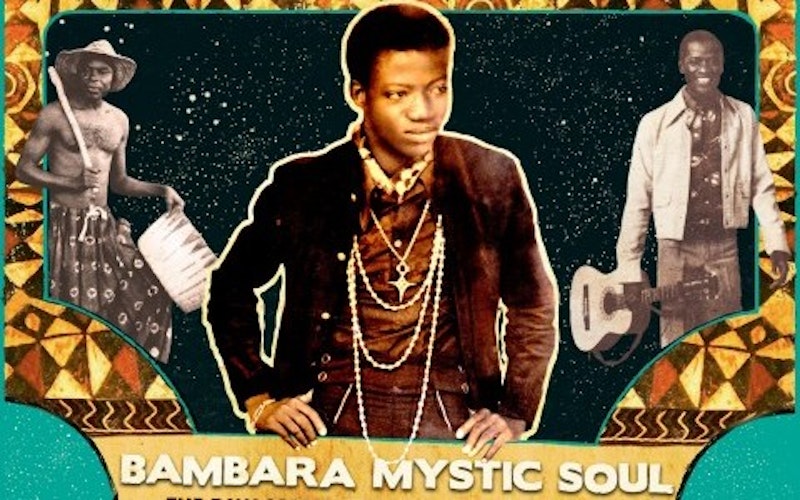 In 2009 the Savannahphone record label issued a collection of music called Ouaga Affair. This was the first major compilation of pop music from Burkina Faso circa the early-to-late 1970s back when the central/west African nation went by its French colonial name Upper Volta. Ouaga Affair was a cosmic portal into Upper Volta's Afrobeat twilight zone: Fela Kuti-type rhythm sections slathered in psyched out fuzz guitar leads, angular dissonant horn charts, and hot Latin jazz flourish. Mutated as they were, the songs were structurally akin to the classic funk & r&b of James Brown, the Stax/Volt scene, and Bo Diddley with tunes lasting around five minutes or less. No pristine full spectrum sound—the Voltaic era recordings are nearly all profoundly lo-fi, exhibiting an out-of-phase murkiness rarely heard outside of the d.i.y. rock scene's most remote corners.

Now the Analog Africa label presents another blast from Voltaic pop's hazy sonic past via the compilation release Bambara Mystic Soul (Bambara is a commonly spoken language in the western part of Burkina Faso/Upper Volta). This collection includes a meticulously researched booklet crammed with historical essays about the 1970s Voltaic recording industry and music scene, plus Analog Africa head Sammy Ben Redjeb's recollections of the misadventures which led to his serendipitous discovery of these recordings. In addition, there are fascinating testimonials from many of the artists themselves which all offer unique insight into the early post-colonial era of Africa that shaped Upper Volta's multi-faceted music. In terms of graphic design, Bambara Mystic Soul looks as beautiful and otherworldly as it sounds, packaged in an evocative pastiche of period photos depicting the featured Voltaic artists and their extremely rare original records and covers.

Damaged sound quality really is an immense presence here, even though the sonic fog does clear for a few brief moments. Evidence of this can be found in the polished cuts by Mamo Labema (lasciviously bizarre disco track “Love, Music, & Dance”) and Compaore Issouf (the tropical storm of splattered keyboard virtuosity and flanging called “Damabakale”). Audiophonic monuments to grime-encrusted glory make up the rest of the record thanks to insane sounds by the likes of Afro Soul System, Abdoulaye Cisse, and Richard Seydou Traore, whose shufflin' tune “Katougo” features live crickets audibly chirping near his mic shortly after the song begins.

The jewel of Bambara Mystic Soul is “Sali” by Amadou Ballake et le Super Volta. The tune truly seems as if it's broadcast through a dense cloud of watery sound effects. Penetrating this misty abyss, Ballake's plaintive croon rolls in and out of focus as overloaded bass thuds transform the song’s percussive backbone into an unearthly throb of hypnotic propulsion. By some strange miracle the Latin jazz subtleties of le Super Volta and the song's melodically winsome quality both are impossible to ignore no matter how gunked up the fidelity gets. It's that symbiotic mesh of genuine songcraft and no-fi eccentricity that make “Sali” and all the music on this record so emotionally powerful.

With not a single dud in the pack, Afrobeat fanatics who think they've heard it all, lovers of the Eccentric Soul scene, or even acolytes of homespun rock should find Bambara Mystic Soul overflowing with unforgettable highlights. It’s an archival document to ruminate upon, and is a genuinely funky blast of bizarre 70s Africana.