From “Venice Bitch” to Lil Peep to A Day With the Homies. 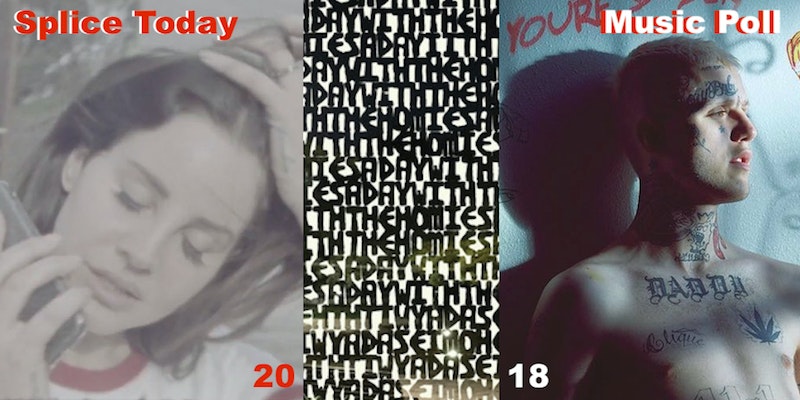 In lieu of a group poll, this year three of our more prolific music writers share thoughts on their own favorites, discoveries, ephemera, and reliable artists in this most diverse year. No amalgamation or algorithms here: these are straight from Raymond Cummings, Nicky Smith, and Booker Smith.

There’s a lot to unpack in “Venice Bitch”; let’s leave most of that to the avowed Del Rey-ologists, next year, whenever Norman Fucking Rockwell drops. What really gets me is how she sings—or emphatically enunciates—the phrase “Venice Bitch,” every time, of which there are so many instances because this song never ends and is in fact still playing through. She sings “Venice Bitch” like she’s gonna throw up in your lap or punch your lights out or start throwing elbows at the club. She belts it like she’s Courtney Love in 1992 and you’re locked in a storage closet with her and there is no escape, none.

The vocals exist mostly to flog those pneumatic, interlocking guitars into long, harmonizing nervous breakdowns that shimmer and sparkle like killer tidal waves in the instant before they drown you; those guitars are what keep you locked in, headbanging while seated and singing along, God only knows what coming out of your mouth, because it isn’t like you or me really care about whatever the words are.

Sometimes nothing hits the spot like a shot of heavy pop metal, and “Rock The Reaper” is the most immediate banger Bat Fangs’ included on their brisk, eponymous debut. Betsy Wright, bassist for Ex Hex, teams up with drummer Laura King and the duo essentially do Ex Hex properly. This kind of music used to be incredibly profitable and ubiquitous, long, long ago, in a galaxy far, far away.

Bon Voyage, the sophomore LP from Melody’s Echo Chamber, remains a baffler. Closer “Shirim,” liquid and funky and alchemical, remains my pick-to-click; it appears to be a cast spell—a spell of protection, maybe?—disguised as a gauche DJ set curio. Miles removed from the warm shoegazery of debut Melody’s Echo Chamber, “Shirim” actively shirks the listener’s attempts to understand what it’s about. That’s triumph.

As breezy, weapons-grade shade goes, “Self” probably can’t be topped this year—a casually-deployed preview of the MC’s CV that doubles as the lead-in to her debut album. If you’re a male rapper, you need to hear this song, and dwell on it for a long while.

In which Julian Casablancas emphatically and unequivocally declares his lack of interest in continuing to front the Strokes, as his new band prepares and serves the kind of freakish, multi-genre pop bouillabaisse which, under the right conditions, could’ve given Prince an orgasm. Some stoner bro is about to go away to college, only to leave his copy of Virtue to a clueless younger brother who wouldn’t know “Human Sadness” from “Last Nite” from “Perfect Crush”. That younger brother will nonetheless have his mind blown, again and again and again.

Only For You is prim, compact, and composed, both in sentiment and composition. Torrisi’s never, ever truly sad here - traces of resignation are outstripped by romantic adventure and metaphor - and she doesn’t take a backseat to this song, but leads them. “Vision of Love” breaks the LP’s 1980s-influenced R&B mold, straying into gospel and soul territory; in a less expensive world, one imagines her draped investments before a pulpit. The sparkling, piano-tickled “Candy” works a handful of saucy and saccharine metaphors for everything they’re worth. Hushed and powered by fingersnaps and click-clack effects, “Discipline” celebrates a scrumptious lack of it.

Listen, folks: I’m old. That doesn’t mean that I’m finished with hip-hop, but for me, rap has to consist of something greater than vapor and ad-libs and nihilism. Produced by 9th Wonder, Streams of Thought Vol. 1 found the genre at its 2018 best. If Black Thought wasn’t a virtuoso, he was passionate and generous enough to share the microphone with veterans and newcomers alike; if 9th Wonder’s beats couldn’t quite break through to radio, they were nonetheless warm and warn-in, like decade old house slippers you slip your feet into after your dog spent the entire day sleeping on them. This is far doper than it sounds.

On her subtlest record yet, Sarah Davachi takes us to church - not a gospel church, mind you, but rather some massive Flemish cathedral in the 18th century where the organist happens to be a meticulous master and the incense is capable of inspiring a serious contact high.

Double LP Universal Beings - which collects dope reworkings of multiple live sets - came out this fall and is rightly garnering drummer Makaya McCraven a ton of media attention. But don’t sleep on Where We Come From, a propulsive, mesmerizing cross between a mixtape and a beat tape. Trust me on this one.

Best Clapbacks at the Perils of Public Life: Ariana Grande.

Best Interview Flailing as Its Own Indelible Artiface: Stephen Malkmus, exhaustedly promoting the heck out of Sparkle Hard.

Slightly Less of a Shrug (longer-awaited): The Carter V.

Worst Fashion Sense that you can’t Escape on the Internet: Post Malone and 6ix9ine (tie).

Worst Pop Phenomenon that I couldn’t get into, while totally understanding why others gravitate to her: Cardi B.

Worst Trend: The continued destruction of music and culture publications at the hands of venture capitalists and society at large.

A Day With the Homies—Panda Bear

“When it’s on it’s on.” A vinyl-only mini-album from the most prolific and influential member of the Animal Collective. Five songs, 28 minutes. His first record since Person Pitch creates its own universe and invites you in. It so vividly captures the melancholy at dusk on a summer afternoon, feeling lonely in a crowd, even among friends. An album that begins with “Flight,” a choir summoning to “Pick up the good crew/We got the good crew/Been out for a minute/Gonna stay out for a minute” and ends with “Sunset,” the narrator wandering the streets alone—in his own head. “Every day I found a euro on the ground/Too late/It’s a blackout anyways.” Panda Bear’s fixation with death continues here in the most poignant and seemingly effortless way, a stark contrast to the theatrical and on the nose Panda Bear Meets the Grim Reaper.

But A Day with the Homies isn’t easy to hear: no streaming, no CD’s. Most people have no idea it exists. Ever since the AC shaved off a substantial portion of their audience in 2012 with the flawed but misunderstood Centipede Hz, their releases and tours have flown under the radar, with only hardcore fans and relatively recent converts showing up and paying off. I made a tape bounce of A Day with the Homies after I couldn’t stop playing it in January and sent it to as many of my friends that might’ve dug it if it were out there. It’s the only record released in 2018 that I listened to regularly and still feel passionate enough to write about in this year-end roundup. The only “new” band that impressed me this year was Palm with Rock Island; all my other picks are by artists I’ve loved for years: Grouper, Eric Copeland, and Jim O’Rourke. I loved the Gas and Autechre records (the latter lasting longer than every other record mentioned here combined), but I haven’t spent enough time with them to say much of substance.

I’m 26 and this is the 13th year I’ve followed new music closely enough to have a Top 10 list, and I fell back on old favorites. I’ve been doing that a lot this decade, but this was the first time I felt ill-equipped to write about anything other than one album. A Day with the Homies is that good, and I’ll end with some thoughts on “Sunset,” the closing track. Beginning with a minute of hi hats skittering through an envelope filter, and then the dubstep drops, everything cuts for Lennox’s harmonized line: “Strange.” The music returns multiplicated, “What are we doing in this thing?/Claim/What are we doing in this thing?/Every day I found a euro on the ground/I’m saying/Why don’t we turn on this thing?” A break on a bed one granular chord: “Only if you try to take away.”

“Odd.” Nothing else has captivated me in 2018 like A Day With the Homies, and I returned to it more frequently than number-ones of years’ past, now close to wearing out my copy of this vinyl-only record. It’s a shame these five songs won’t reach the audience they deserve because of a nostalgic conceit about discovery accompanied by a mealy-mouthed message from the man himself wherein he pondered whether what he was doing was even worth sharing anymore. This is the AC’s biggest blunder to date, second only to Avey Tare and Kría Brekkan reversing all the songs on their 2007 album Pullhair Rubeye at the last minute (motivated by hash and David Lynch’s INLAND EMPIRE).

That album, full of beguiling and beautiful acoustic songs, was promptly trashed as an indulgent and silly prank. Panda Bear’s Person Pitch, now widely cited as one of the most influential albums of the century and probably the most famous AC related release, appeared mere weeks before Pullhair Rubeye. Now, A Day With the Homies remains in limbo, beloved by some fans but still inaccessible to most, and with the AC’s diminished audience this decade, these songs are being heard by too few people to countenance. So here I bang this drum: A Day With the Homies was the only album I really cared about this year, and I want you all to hear it, too.

1. A Day With the Homies—Panda Bear

Worst reunion album: Shiny and Oh So Bright, Vol. 1 / LP: No Past. No Future. No Sun—The Smashing Pumpkins

This song is good despite the association with Zachary Cole Smith, who I'm told is problematic.

I listen to this song when I do my Tennessee Williams cosplay.

I got a ho but that bitch call me daddy my bitches I bought em some titties and asses!

The best Joyce Manor songs, like this one, sound like they were written by a teenage boy who had an affair with a suburban mom and now feels weird.

Soon we'll be able to assemble a whole album of Drake's chillwave songs so he can finally defeat Washed Up and Toro Y Moi.

I've read this song's YouTube comments and a lot of men empathize with the lyrics, which is sad because the lyrics are very mean, but I suppose they like that aspect of it.

Future is our greatest living rock star, but in this song he is rapping.

NBA Youngboy also wins Best Use of a Slur for Master the Day of Judgement cut "Get Right."

Bhad Bhabie is the goat and this beat sounds like Young-Adult Boards of Canada.

6. "It Was All Fields Around Here When I Was a Kid" — Helena Hauff

This would be the Megaman soundtrack if Megaman had my brother's constitution.

Drake is Michael Jackson and that's why Kanye is jealous.