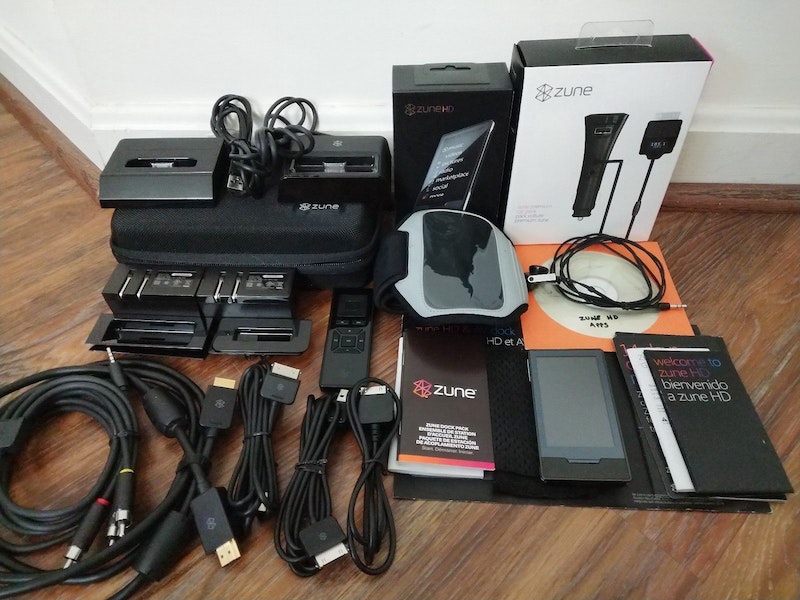 Once, early adopters could be proud of what they did. They had a place in the tech industry (specifically, they were the first 12 percent of buyers for any given product). I remember the feeling of unwrapping my first-generation iPod and filling it with music—not my whole library, true, but a big chunk of it. It was designed with a clickwheel, which turned out both bizarre and useful, and made sense right out of the box. Nobody had ever seen a clickwheel before because nobody had ever seen an iPod; the design and components were all part of one sudden revolution.

Imagine, though, if my first iPod had been able to hold, not 1000 songs, but 100 songs. Now we’re getting somewhere, eh? And, instead of being the size of a pack of cards, I’m picturing something big as a frozen lasagna. Not really pocket-friendly, sure, but you could still walk around with it if you brought along a duffel. After playing one song, the device would then stop and power down, in order to make the most of its 45-minute battery life. It would be as simple as that! What do you think?

I’m only half-joking. This imaginary device, which I call the Mel-O-Dial, would've been every bit as cool and useful as most of the new technology in stores today. Being an early adopter has become a sucker bet: you get to be the first one with something that doesn’t work. When I upgraded to the “Insider Edition” of Windows 10, their supposedly "mostly ready” beta ate my hard drive, belched loudly, and then asked me if I wanted to send a report to Microsoft. (I did send them one, but it can’t be reprinted here, due to limited space and the possibility that children are reading this.) I keep hoping that I’ll lose the S Pen Samsung has provided me for use with my tablet, just so I’ll stop feeling a vague need to “integrate” that pen into my “workflow.”

The question is not so much whether we could’ve sold consumers on the Mel-O-Dial. Sure we could’ve. Remember the Zune? No, the question is how to stay relevant. What would our Mel-O-Dial reboot, slated for release in early 2019, do and contain? (On a related note, the more articles we can seed that call our latest device a “far cry” from its “early days” as a “dedicated music player,” the better.)

Well, first of all, it would be a two-in-one combo, part laptop and part tablet, with a touchscreen. That used to be the kind of exotic tech you’d only find in expensive museums and futuristic TV shows. Now it’s kind of sad to have a computer without a touchscreen, like it is to buy scented candles at a drugstore. The ideal touchscreen, according to the latest trends, is really, really big. So big that you can’t even hold it in one hand without pain. I’m typing this on a 17.3” computer with a touchscreen and two-in-one hinges. Sometimes I try pressing my finger on a little icon, or snippet of text, just to see what the computer will do when I miss. The people at Lenovo call their combo laptop the “Yoga,” which strikes me as a perfect description of all the positions such devices can supposedly assume. You’ll never use more than one of the Yoga’s many “modes,” just as you’ll never do more than one of the actual yoga exercises currently downloaded to your phone.

We should include wireless earbuds that look like AirPods. AirPods are those little white things you pair with your phone and cram in your ears. You can use them as workout accessories, unless you sweat, or live somewhere where it rains. You can use them as fashion statements, if the statement you want to make is that you’re a douche living in a dystopia. Apple has turned the charging case into a large white Chiclet from outer space. Its mission: to fall out of your pocket and—quietly, without arousing suspicion—disappear completely. Once you buy AirPods, you can experiment with them by listening to your favorite genre of music, since AirPods make every type of music sound awful in its own special way. Have you ever tried listening to hip-hop with no bass? What about classical music performed on screaming violins? You don’t know what you’re missing. One study found that six out of 10 AirPod buyers thought John Coltrane’s A Love Supreme was “a cab going by.”

Our device should be VR-ready, so that buyers can plug in their headsets, for which God knows they’ve paid dearly enough. Once you’re “in” virtual reality, there’s almost no limit to what you can do, other than the number of compatible applications, which is a number very close to absolute zero. I guess that in theory you can do amazing things with virtual reality. Doctors will one day use it to perform remote surgery, which certainly seems like a good reason for a non-doctor to buy something useless right now. Even more promising than VR is AR (“augmented reality”). For example, in the game Pokémon Go, you might look at your device and see a virtual treasure sitting on a real park bench. Or, in the game Staff Meeting, you might look at your device and see only empty chairs in a darkened room. In other words, no matter how you use it, augmented reality is usually much better than real reality.

Our Mel-O-Dial will make use of wireless charging technology. Instead of the old system, where you had to plug your device into a wall, these new chargers work right through the bottom of the device, starting the minute you plug the charger into a wall. The Mel-O-Dial will also come standard with a lot of pixels and some kind of special LED screen. I don’t happen to care whether it’s a QLED, an AMOLED, or an OLED, as long as there are extra letters of some kind. That way it can play HD movies. In past years, what the industry called “HD” was not, if you stood next to your television with an electron microscope, very impressive. Now, though, we can make pixels that are smaller than frickin' hydrogen atoms if the price is right. On your current data plan, you’ll be able to stream one, or perhaps even two, movies a month—all of it in resplendent 4K detail!

My only concern is competition from Amazon. They’re already working on their own “Mel-O-Kindle,” which includes the Alexa voice assistant, and retails for $39 on Black Friday, Cyber Monday, Green Monday, and Ash Wednesday. You can stand it up on your desk and shout at it from across your living room. Plus, two weeks later, they’re going to release a second-generation version of the same device. It makes you wonder why they didn’t just wait two more weeks, in order to get the damn thing ready to go before putting it on shelves. Regardless, there’s no question that $39 is a good price for a two-in-one laptop with a touchscreen. Ball’s in our court again. We need new features that will make us stand out. Personally, I’m in favor of upgrading our processor with some new chips. We could give the chips a fun, goofy name like “Nacho.” Or we could give them an intense, techie name, like “NachoWX.”

In 1999, we brought you a little device that turned out, in a very real sense, to be not-so-little. Now, on the 20th anniversary of that landmark release, we are proud to announce the Mel-O-Dial Omna. Nacho Edition. Finally. A device that has everything.