Psychedelia from Kikagaku Moyo and Tvlpa. 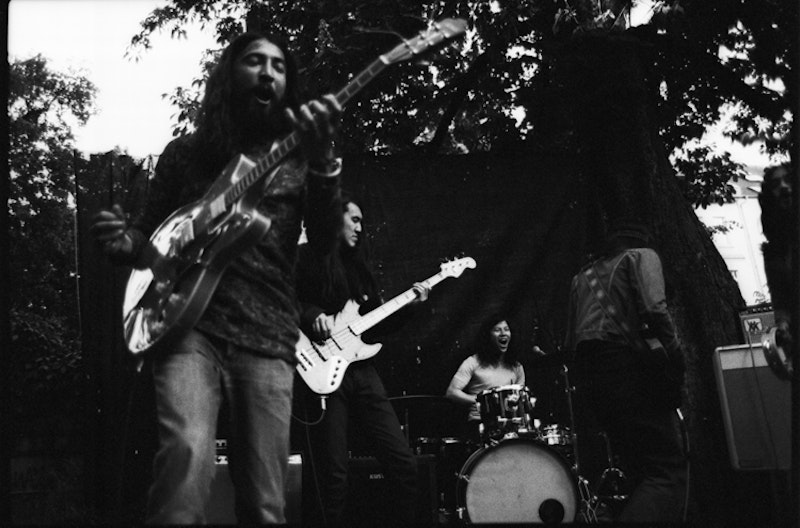 Psychedelic music is associated with expanding consciousness; turn off your mind, relax, and flow downstream, often with the aid of various more or less illegal substances. The internal voyage, though, is often accompanied by an external one. Spirituality is found across borders, especially towards the East, in exotic, not to mention Orientalist, meditation practices. The sitar, for the Beatles, became a symbol of inner and outer transcendence, a way for English people, or Americans, to delve within by reaching out to some other, romanticized geographical locale.

If the west finds spiritual fulfillment in the east, it seems only fair that the east should be allowed to run the vision quest in reverse. Which is the story of Kikagaku Moyo. Following in the tradition of numerous Japanese musicians, from the Far East Travelin' Band to Ghost, Kikagaku Moyo on their new album House in the Tall Grass, finds drifty oneness by appropriating a western tradition all about appropriating the east. "Kogarashi" dissolves at the end into sitar-like wavering and wah-wah effects that might as well be a Beatles' sample. The Bert Jansch-esque guitar exercise "Cardigan Song," with its wispy, fusty Englishness neatly summarized in the title. The 10-minute "Silver Owl" has the nature-worshipping, cross-eyed feyness of any number of British folk acts—I'm sure Kikagaku Moyo worships Vashti Bunyan and Donovan as well as Pink Floyd. There's a devotional shimmer dropped in the middle of the song before the gentle groove strums on its way again. The band sounds like it's broadcasting, not from its home in Tokyo, but from some faerie circle in the Welsh countryside—not least when, as at the end of "Silver Owl," it locks into a hammer-of-the-gods Zeppelin riff, just to remind you that titanic metal myth-making originally was meant as an accompaniment for Hobbits traveling off to distant shores.

Kikagaku Moyo's passions, and direction of influence, is easy to pinpoint. Tvlpa's a little more difficult to pin down. The anonymous Swedish collective isn't as clearly England-obsessed; there's no Beatles sitar-like effects, and no Zeppelin head banging. Still, their album Mountain of the Opposer is at least a cousin to psychedelia in its commitment to mind-expansion through drone.

Tvlpa's music is part of its fascination with the occult, and the album sits somewhere on the edge of metal and ear-piercing electronica. The first seven-minute track, "Dragon Mound," has distorted deep voice muttering unintelligibly while what I suppose is a beat cycles grindingly over feedback and hisses and yowls. "Mountain Sermon" condescends to include a melody of sorts; a seven-note keyboard figure that repeats and repeats as (quite psychedelic) distorted voices mutter "Life!" "Fire!" and other profundities. The album doesn't expand towards the vast beyond so that the self can shuffle off its mortal constraints; instead it clamps down with claustrophobic reiteration, grinding the self down to nothing.

That no-place still looks across the globe for inspiration, though. The song "Void Shaped Mudra," inevitably, refers to a hand gesture in Hinduism and Buddhism in its title. There's nothing overtly South Asian in the music, which comes across more like demons whispering to Throbbing Gristle—but still, that psychedelic Orientalist gesture is there. Discarding the self, either by floating free of the body or by being pummeled into non-existence, is hard to imagine without a vision of discarding one's surroundings as well. From Britain to Sweden to Japan, the promise of psychedelic escape is translated into a metaphor of going somewhere else on the globe. To get out of your body means to get out of this one place your body is standing. Trippy is a trip.