Nirvana and Sinead O'Connor: Battle for the Future 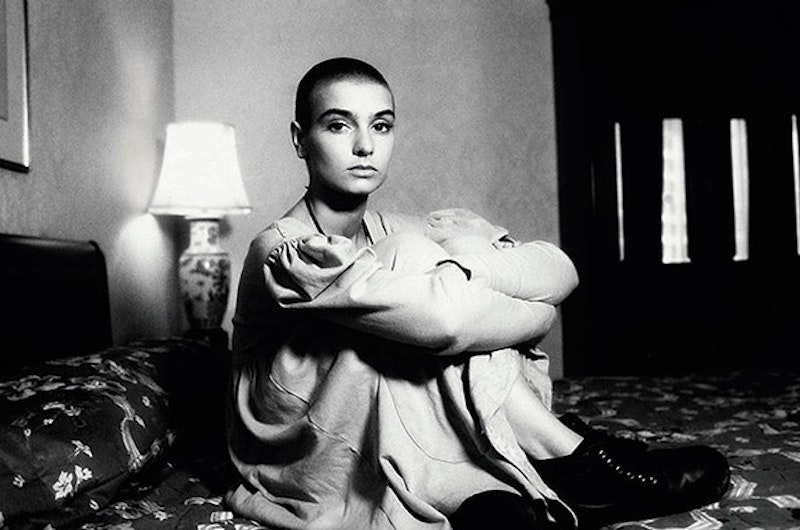 I was surprised to discover this week that Sinead O'Connor is a lot more relevant than Nirvana.

But now I'm older and so unhip I don't even mind telling you I still own CDs. I love both albums unreservedly, and in similar ways: they're visceral, gooey, confessional, and emotional. On "Lithium," Kurt Cobain scratches open his anthemic self-loathing by alternating between bored fugue and manic roar. "I like it/I'm not gonna crack/I love you/I'm not gonna crack" is despair as adrenaline, or vice versa. O'Connor in "The Emperor's New Clothes," presents her own bruising break-up with less overt violence, but equally forthright nakedness: "You asked for the truth and I told you." They both channel punk's honesty and some of its trappings into catchy, heart-on-sleeve politicized pop via distinctive voices—Cobain's guttural, mumble; O'Connor's keening wail—and unconventional, striking good looks. And they could both write a hell of a hook.

Cobain was crowned as the savior of rock; his version of brainy hair metal with depression substituted for sex launched imitators and was supposed to save the radio from disco and its offshoots once and for all. O'Connor's mix of singer-songwriter folk and dance pop seemed less of a stylistic rallying cry at the time. No one ever thought that she'd be the future of anything.

Nonetheless, 20 years on, it's O'Connor who seems up-to-date, while Cobain is oddly irrelevant to a music landscape he was supposed to define. Rock, to the extent it exists on the radio, tilts towards the smoother sensitive emo of Radiohead or Coldplay, rather than Nirvana's agonized slouching. Nirvana gets played on classic rock stations not infrequently these days, which makes sense: the chiming head-banging swagger of "Smells Like Teen Spirit" fits better with Aerosmith or Van Halen, back in the 80s or 70s or 60s, before hip-hop became the go-to genre for masculine posturing.

If rock has been sidelined, though, cross-genre female confessional remains both widely popular and up to the minute. Björk's Vulnicura, about her breakup, got mentioned in the same breath with O'Connor's "Nothing Compares to You." "Black Boys on Mopeds" is more fitting now than when it was recorded, Margaret Thatcher references notwithstanding. "It's the home of police who kill black boys on mopeds/I love my boy and that's why I'm leaving/I don't want him to be aware that there's any such thing as grieving." The lyrics refer to England rather than the United States, but it's not hard to imagine Beyoncé singing them or something like them on her next album. They'd fit on Lemonade.

I don't think this means that O'Connor is a greater artist than Cobain. I like them both a lot. And of course Cobain's importance was in part sealed by his early death; he didn't have a chance to make a bunch of so-so albums the way O'Connor has. But beyond that, Cobain is widely considered a genius because he was on a vanguard that, it turned out, wasn't, while O'Connor gains no special recognition even though, in retrospect, she had some claim to being on a vanguard that was. It's hard to tell which art is forward-looking when you're stuck in the past—and even sometimes when you get all the way to the future.