Trail of Dead is unjustly trashed by zipheads. 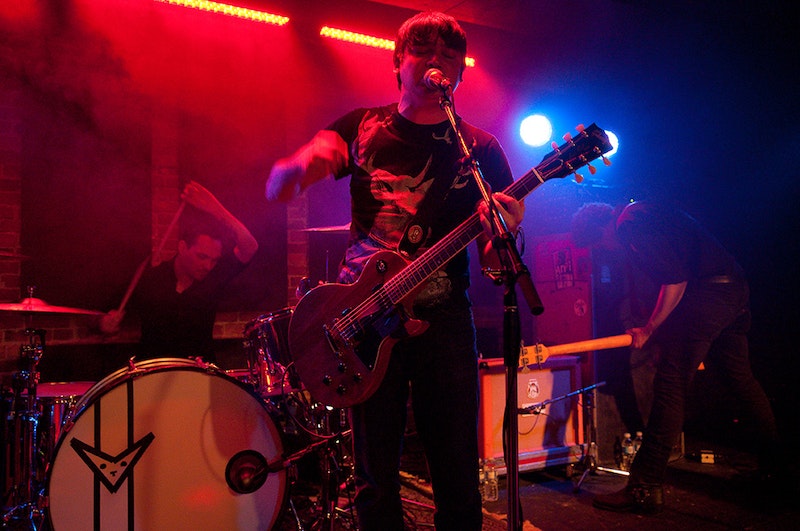 And You Will Know Us By the Trail of Dead is as strange a band as its name is pompous. Nearly eight years ago, they fell through that strange crack between indie acclaim and MTV acceptance—their major label debut Source Tags & Codes was already considered brilliant by the end of 2002, and in the post-coital glow of Strokes and ur-rock hype, they were seen as potential torch-bearers. They spoke of wild ambitions in interviews next to Usher and Eminem, openly dissed bands whose shittiness inspired them, and continued to smash their instruments to kindling at most of their shows. So why are they back to being practically unknown?

Drama. Trail of Dead went full bore theatrical on 2005’s Worlds Apart, creating a classic record so full of ill-advised, borderline cheesy, and kitchen sink production and songwriting that no one was cool enough to admit they liked it. The indie sheep who bowed at the altar of a sacred 10.0 from Pitchfork quickly dismissed the band’s histrionic and over the top style as gauche and patently embarrassing, while mainstream TV and radio predictably couldn’t care less. This was less than 10 years ago, when making an “MTV video” was still a goal/obligation, and kowtowing to major media like Entertainment Weekly and Rolling Stone was status quo for greenish rock bands making space for themselves on major labels like Interscope.

Under-established and lacking in a self-sustaining bubble of truly devoted fans that would follow them regardless of disparaging notices, Trail of Dead sunk in between the tracks, without a home. 2006’s So Divided was even better than Worlds Apart, and even more obnoxious and winkingly corny, with songs that sounded glorious and humiliating all at once. Those two post-Source Tags records are their most bratty, self-indulgent, arrogant, and combative than any of their others. Everything a great rock band should be.

Trail of Dead are victims of a new kind of peer pressure: music fans are too beholden to critical consensus as a shorthand for what’s good and what’s not—the dynamic has always been there, but in the Internet age, where everything is flat, it’s even more pronounced. It makes or breaks careers. Perhaps there are simply more sheep about, overwhelmed by vast digital libraries of hundreds of thousands of songs from the last 50 years, totally lost as to where to start. But it all ends up as some perverted and ridiculous extension of the playground rules, with childish kneejerk reactions, emotional bullying, and snootiness/ironic distance as the norm. The things Trail of Dead got the most shit for—their lyrics (“Look at those cunts on MTV with cars and cribs and rings and shit/Is that what being a celebrity means?/With boys and girls on BBC/see corpses, rapes, and amputees/what do you think now of the American dream?”), their enfant terribles attitude, and heart-on-sleeve intensity and dripping emotionality, are qualities that Japandroids and Titus Andronicus are praised for today. But is a small cadre of critics’ disdain for Conrad Keely’s ornate and lush album artwork and artiste ambitions really the last word on whether this band should be playing sold out theaters or half-empty pubs at all? Not even close. Trail of Dead are the sound of rocking at the edge of a fucking cliff, and its goals will be clearer to see in hindsight. They stand as the foremost reminder of the dangerous power of the indie hive mind—when a dozen critics with a self-serving agenda stand between a band’s success a failure, we have a serious problem.