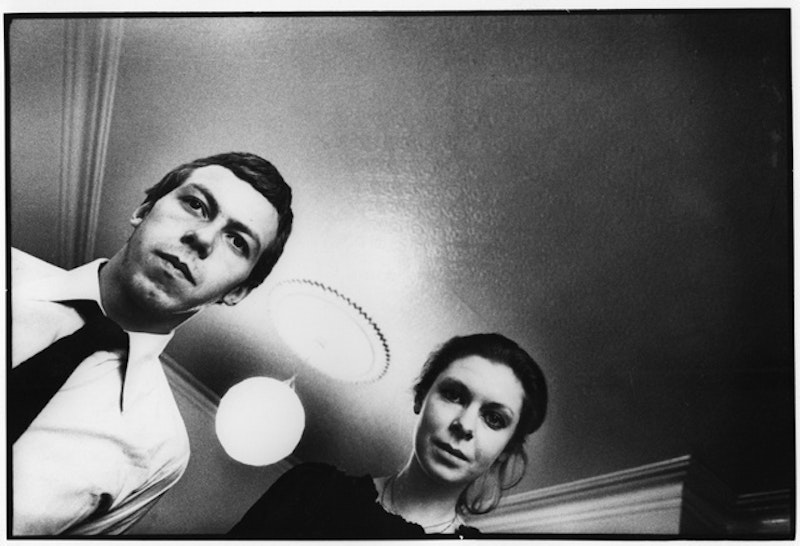 From Andy Warhol's Velvet Underground cover to Lady Gaga's performance art meat dress, the gallery and pop have had a long courtship, culminating in various bizarre consummations. A great semi-forgotten example is the Flying Lizards, a British New Wave band with one foot in Fluxus who dabbled in avant ironic and ironic avant. The brainchild of record producer David Cunningham, both vocalist Vivian Goldman and musician David Toop were rock journalists, which is perhaps to blame for their debut single, a desecration of Barrett Strong's much rock-critic praised "Money (That's What I Want)." Goldman talk/sings in a mannered little-girl-in-the-cabaret lilt while the rest of the band yodels "That's what I want" like a computerized simulacra of wolves. Someone hits a piece of metal with another piece of metal; someone else elicits hideous bleeping sounds from a keyboard, and the rave-up riff wanders on through blank spaces, cowbells, and blind alleys booby-trapped with falling girders.

The joke, presumably, was that they'd turned a plea for lucre into a resolutely un-commercial exercise in earache; the end of the song, where the beat vanishes almost entirely, really sounds like it could be a sound installation. But the joke on the joke is that, as it turns out, snooty provocation and goofy novelty record are indistinguishable from one another, with the result that "Money" improbably made a ton of money, setting the stage for the Lizards' self-titled 1980 debut.

On the record, each track is more arch than the last. Brecht/Weils’ "Mandelay Song" is half-sung/half-squeaked by some unholy hybrid of Marlene Dietrich and Alvin the Chipmunk while the over-carbonated piano backing is occasionally interrupted by background singers who attempt to imitate kazoos. Goldman's "Her Story" is less musically bizarre; there's just a basic stiff funk baseline vamp. The lyrics, though, wink so hard you wonder that she was ever able to open that eye again. "You can still make money/by singing sweet songs" and then robotic guys in the background declare, "I own you/You don't own me/You are my territory/this is a love song."

"TV" sounds like a girl group tune gone horribly awry; some Phil Spector pop hook swinging along while Goldman mutters on darkly about Elton John, and then the keyboards stagger in and an earnest aesthete intones, "I find you very, very, very, very, very, very, very, very, very, very…" and on and on. We never do find out "very" what. In contrast to this happy negation of happy nothing, "The Window" attains a blithe creepiness. "Can you hear him bang at the window/He's throwing things out the window/I don't want to let him in/I wish he wasn't twice my size" as an off-kilter sing song could serve as the soundtrack for The Exorcist.

My favorite track, though, is another cover, Eddie Cochran's "Summertime Blues." The rockabilly rave-up is slowed down, the lightning, jittery beat turned into a wandering, zombie stagger. The teen-rebellion lyrics in Goldman's over-enunciation become an explicit parody; you wouldn't think you could say "I'm gonna raise a fuss/I'm gonna raise a holler" with so little oomph. The dissonant art school squall at the end suggests a Sonic Youth rendered surgically un-visceral—desire, frustration, and even that truth-of-all-truths, money, becomes irrelevant through sheer, stubborn refusal to rock. Instead, high art's sophisticated disavowal of straightforwardness fits seamlessly onto pop's chipper meaninglessness. Is it mass culture crap turned into high art, or high art turned into mass culture crap? Either way, you can still make money by singing sweet songs, as long as those songs are weird enough.