An interview with Gordon Voidwell of Bad Etudes fame. 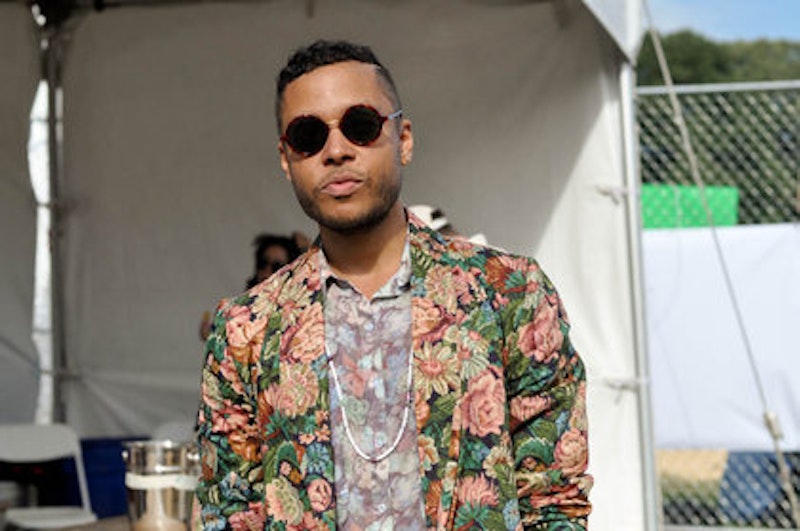 At any given moment, there’s a certain set of signposts musicians use to signal that they’re hip to the game. Right now, you could easily rattle of a number of these without thinking: a falsetto, finger snaps, synthesizers that show a familiarity with Prince, beats that demonstrate a knowledge of Dilla, a bit of edge imported from the early 1980s downtown New York scene, and a coating of murk to add mystery. Musicians that rely on several or all of these tropes as crutches should be approached warily. On the other hand, artists who can recognize that they’re becoming clichéd while still deploying them to good effect—actually using the valuable tools, rather than just including them to prove they’re on the ball—should be embraced.

Gordon Voidwell, who put out the free mixtape Bad Etudes earlier this year, addressed this all back in in 2009. On the 16-second “Down with Prince (Interlude),” from Voided Check, he used a Prince-like falsetto to sing, “I’m sick of motherfuckers trying to tell me that they’re down with Prince.” Just as he’s not afraid to point out signifiers of cool (while employing them at the same time), he’s also willing to go after arbiters of cool. A different song, titled “Sasha Frere DISS TRACK!!! (jk),” cracked jokes about New Yorker pop critic Sasha Frere-Jones. (Another track on the tape was remixed by the now defunct rap group Das Racist, who once wrote a rebuttal to a Frere-Jones’ column about hip-hop.)

When he was young, Voidwell sang in the Harlem Boys Choir; in high school, he fooled around with beats made by other people. He got his hands on a sampler his freshman year at college, at which point he started focusing on writing his own songs. Learning how to use that first instrument back in college was important, since his latest work is “almost entirely sample-based.” For Bad Etudes, he also “added drum programming, synth parts and chopped, re-arranged the samples.” The mixtape was made on the cheap, but rather than regarding this as a handicap, Voidwell embraces the aesthetic imposed by budget constraints—“it tends to make shit a bit more funky, wrong and imperfect and that tends to feel a bit more magical to me.”

Bad Etudes emerged from Voidwell’s desire "to have a conversation with that recorded material”—the stuff he sampled. The result sounds like he’s having a number of conversations at the same time: probably with Prince’s female alter-ego Camille, but also with the Bee Gees, Sophie B. Hawkins’ “Damn I Wish I Was Your Lover,” Salt-n-Pepa, and anything that Larry Levan might have played during one of his legendary sets at the Paradise Garage. (When asked to pick someone to remix his songs, Voidwell names Levan, who died in 1992 when he was just 38 years old.) The vocals move from high and child-like through falsetto to a deeper, more urgent mid-range. Synths pulse and crash, drum machines smack and skitter, the bass pops in and out.

When listening to music, Voidwell wants to “be compelled and feel slightly weird and uncomfortable”—which can happen with the new, critically-praised songs from Shamir and MNEK or with the “big ass, dumb, EDM, club remixes” he hears on the radio. Voidwell’s good at achieving the mix of compelling and weird with his own music too. There’s a high whirring instrument on “Homemade VHS” that’s hooky but almost annoying. He uses a strange, dissonant vocal manipulation to end “GF Jeans”—he doesn’t scale down the song or fade out like most people do, he drives the song into the ground.

Last year, praise was lavished on Blood Orange’s Cupid Deluxe and Jai Paul’s leaked collection of songs, so it’s surprising that Voidwell isn’t getting the same level of reverence—Bad Etudes is a stronger, funnier, and more versatile release than either of those. “Fashion Glasses” has a spare, sharp rhythm—all business—that contrasts with the amusing lyrics. “I wanna take you out, but what oh what to wear?” Later, he chants, “killing it, you’re killing it,” which, paired with the propulsive beat, would be a sure hit in a club. “XO BF” has a thick, blurting backbone. The verses are sung in a teasing tone, while the hook is pesky, vulnerable, and dismissive. “Maybe I’m insecure, I don’t know what for/I listened to his songs, his art was such a bore.”

Fittingly for a man whose music manages to shoot in so many directions at once, Voidwell is keeping busy, “doing production for six different records by different bands/artists in the past two months.” He calls all these projects “exciting and promising” (“two of them are very big records”), though he’s “reluctant to say any names publicly because none have officially announced release dates.” He’s also helping out “a few very awesome producers” and on top of that, he wants to put out a studio album before the end of the year. It sounds impossibly messy to be working on all these things simultaneously, but that’s the point. “There's a ton to learn from those messes,’ he says. “Then you start over again. Then you get that shit mastered.”

Gordon Voidwell: It's definitely not the name my parents gave me. But it is the name I chose for myself. That's kinda more real in a way. So yeah, depends how you define "real" I guess.

ST: When did you start making music? How long have you been writing your own songs?

GV: I got my first instrument, an Akai S20 sampler, during my freshmen year at Oberlin College. That was probably the first time I took full control of turning my ideas into actualized songs. I'd sung and rapped over other people's beats in high school and toured with the Harlem Boys Choir as a kid, but by college, I became dedicated to learning the craft of songwriting, recording and sound design.

ST: When you are putting together a song, what’s the process?

GV: I really wish there was a predictable process for making my songs. That would definitely make my life easier. But for me, making a song is a perfect metaphor for living this life; you make messes, you clean those messes up, you realize those messes—though occasionally painful and uncomfortable—actually happen for a reason and there's a ton to learn from those messes and in those messes, you learn to grow and how to communicate your own individual experience on this planet. Then you start over again. Then you get that shit mastered.

ST: Did you play all the instruments on Bad Etudes?

GV: Not at all. Unlike my first tape (Voided Checks), Bad Etudes is almost entirely sample-based. In a lot of cases, I added drum programming, synth parts and chopped, re-arranged the samples, but I definitely didn't play all the instruments on there. I mean, I could have, but that wasn't the task at hand. I really wanted to have a conversation with that recorded material.

GV: Hard to say how much this album cost to make. Like, there wasn't a budget. I just decided I was going to do it and I did it. Definitely didn't get paid to make the record. When I look at a lot of the other albums that made NPR or Complex's favorite albums of the year (so far) they were all albums that cost a lot to make. A label paid a publicist, paid for studio time, paid a mixing engineer, paid for equipment to be rented, musicians were flown in, etc. That was why I tweeted that. I've worked on other artists' projects at that level and it's cool and awesome and can make things way more comfortable, but I also really like doing my own shit on a DIY level. I feel like it tends to make shit a bit more funky, wrong and imperfect and that tends to feel a bit more magical to me. I have no desire to make expensive albums so much as I have a desire to make good albums.

ST: You did a mix for Nerdist that involved Shamir, Dornik, and MNEK. Do you listen to a lot of new music? What do you look for in new music?

GV: Same thing I look for in anything; I want to be compelled and feel slightly weird and uncomfortable.

ST: You played recently with Mapei and Tove Lo, who have both been getting a lot of positive press. How did the show go?

GV: Actually, Mapei didn't end up playing. The show was cool though. Tove Lo is kinda just like solid, good pop music. You know, can't ever really be mad at that. If I'm being honest, I feel like a weirdo next to most artists on most bills. That one was no different.

ST: If you could get anyone to remix one of your tracks, who would it be?

GV: I love Larry Levan remixes, probably because I know I'll never get one. Also, I kinda just like big ass, dumb, EDM, club remixes lately. But I don't know any of those producers’ names. I just hear them on the radio when I'm driving in the Midwest and feel simultaneously repulsed and enthralled and that's a gorgeous feeling.

ST: If you could get anyone to sing a song you’d written, who would it be?

GV: If I could get anyone to sing a song I wrote, probably Romeo Santos. He has a really unique, complicated tone and understands vocal movement in a way that differs from most singers. Even though it's all like emotional bachata ballads, that dude might have the realest voice in the game.

ST: What’s next for you?

GV: I've been doing production for six different records by different bands/artists in the past two months. All of them are exciting and promising. I'm reluctant to say any names publicly because none have officially announced release dates. But yeah, they'll all slowly start coming out. Two of them are very big records, I think. I've also been writing hooks/melodies/toplines for a few very awesome producers. So yeah, even if it's not my voice singing, more of my vocal ideas should be around in the next year. I'm also going back in with producer Chris Zane in the next few weeks and we're hoping to finish the very first Gordon Voidwell studio album by the fall. If I play my cards right, I'll have another mixtape done by then as well. And then playing Afropunk festival in August with  D'Angelo and I just curated a Grace Jones retrospective in late July for the Black Rock Coalition in NYC. Probably a bunch more I'm forgetting. It never stops.

-Photo by Edwina Hay of thisisnotaphotograph.com (for Impose magazine).