Here's to Our Former Fans

Free EPs from Jeremih and The-Dream. 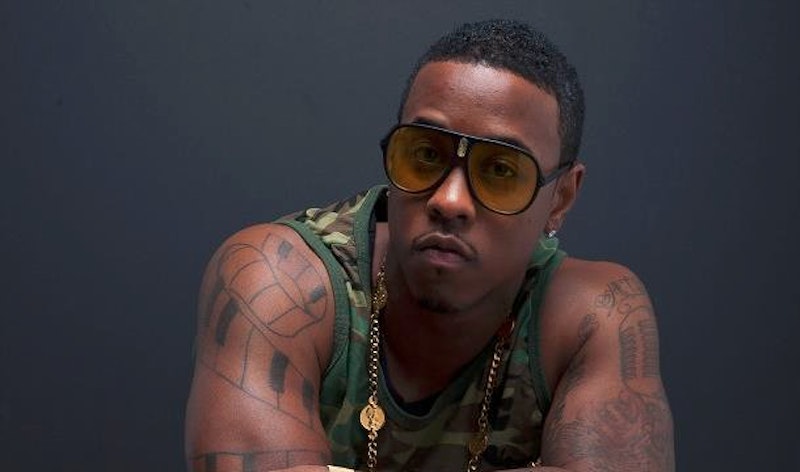 If I happened to be either one of the singers Jeremih or The-Dream, I’d be rich, but I’d also be pissed off. Towards the end of the ‘00s, these guys seemed to have the world at their fingertips. Jeremih had a Def Jam contract and a debut album that contained “Birthday Sex,” a #4 pop hit. The-Dream—real name Terius Nash—was even better off. He wrote and produced several of the biggest hits of the decade, so he had the biggest of the big dogs on speed dial. In addition, he released three albums that boiled down some Prince, mixed it with rap, and earned him accolades from the gatekeepers of elite taste. Five years later, the world has changed, and to a large degree, slipped away from both men. They’ve both released free EPs that acknowledge this fact.

Jeremih’s No More, a collaboration with the L.A. producer Shlohmo, has been in the works for some time. Now it’s here, but two of the six songs have already been out for a while, and another one is a remix of a song that’s been out even longer. The EP is a great format for experimentation, and 2014 has been a fantastic year for vital EPs. But this is just three new songs, and none of them are as interesting as the three that got people excited in the first place.

The initial tune these guys worked on together, “Bo Peep,” was part of the Yours Truly and Adidas Originals "Songs From Scratch" series. This type of project is increasingly commonplace. A lot of brands have been putting hip acts together in the studio and hoping that the resulting musical magic reflects back positively on the capitalist forces that are often seen as anathema to the pure, unadulterated stuff—you know, “real music.” Ironically, these blatantly commercial collaborations have often been artistic successes, and “Bo Peep” is a perfect example. Outlets like Pitchfork and Spin didn’t cover Jeremih when he put out “Birthday Sex.” After “Bo Peep,” the singer got more respect than he ever did for a sticky, platinum pop hit. It’s a great example of the way brands can sell anything they set their minds to.

Anyways: “Bo Peep” came filled with clouds of Jeremih’s vocals, tender and high, but also lots of creep and menace at a time when those things have become increasingly valued in critically appraised R&B—FKA Twigs, the Weeknd, et al. “No More” which came out earlier this year, one-upped “Bo Peep.” Along with Future’s “Move That Dope,” which came out around the same time, “No More” seemed to be working on a different plane, acknowledging Kanye’s Yeezus and the domination of DJ Mustard beats but pushing those tropes further.

The new tracks step away from the cutting edge. At its core, “Let It Go” is a power ballad of 80s proportions, with Jeremih wailing, mostly without words, at full capacity. “The End” shows that Shlohmo can make a DJ Mustard-like beat as well as the next Mustard imitator. In the middle, the song slows down and shifts gears (which also happens in “No More”). Chance the Rapper, who, like Jeremih, hails from Chicago, shows up to yell a few words incredulously. The EP grinds to a halt, ending with what sounds like an afterthought.

Is The-Dream living the dream these days? He still writes for and produces the big stars, but people aren’t into his sound the way they once were. He split with Def Jam this year. His last solo album, IV Play, basically stole its title from R Kelly (except Kelly purposefully named his 12 Play, because 12 > 4), and Nash seemed bored. These days, it’s easier for him to make a living writing hits then it is to try to sing them himself.

His free EP, Royalty-The Prequel, oscillates between boring and strange. On “Duet,” he gets a kick out of the fact that “duet” sounds like “do it;” the song “Wedding Bells” contains wedding bells. The weird stuff is pretty weird: apparently, the man is feeling really nostalgic about southern rap right now. One song, “Pimp C Lives,” takes its name from the dead member of rap duo UGK. “Outcast” rips a heavily-used Roy Ayers sample. Nash is “looking for that moment, that real love shit/that feeling that I felt when that first Outkast hit.”

But “Cold” takes it up another notch. The tribute switches from south to north, as The-Dream sings over the beat from a New York classic, Mobb Deep’s “Shook Ones Pt. 2.” It’s a hurt love song that sounds like it’s addressing the pop world. The cold lady in question plays Nash some music; he lists the artist’s names: Frank Ocean, Trey Songz, the Weeknd, Miguel, Drake, Usher. A sexy woman listening to the (mostly younger) competition—this is pretty much the worst thing The-Dream can imagine.  The hook includes a chant of, “I’m not a favorite no more.” Songs like this won’t change that.