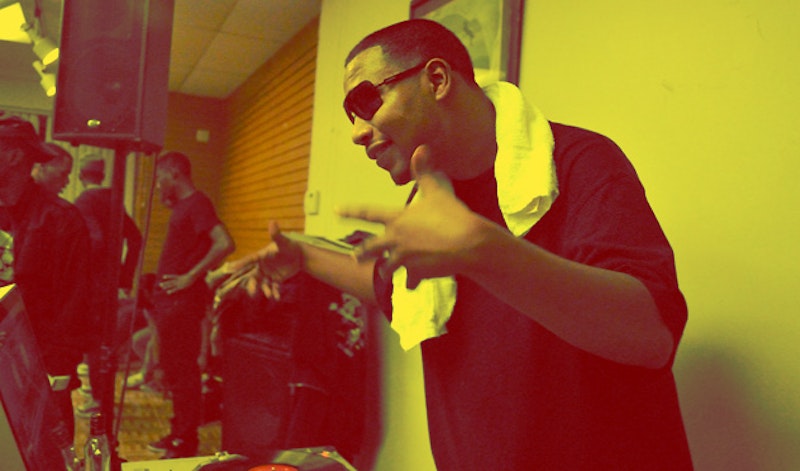 Earlier this month, it was reported that the death of Chicago’s DJ Rashad, back in April, was the accidental result of an overdose of heroin, cocaine, and Xanax. Given that, the posthumously released “We On 1”—with its looped, insidious refrain of “Robitussin, pain syrup, Promethazine”—feels instructive, as does the track length of 2m42s. Be careful, it seems to shriek, beneath its numbing, heavy-lidded litany of medicating syllables, burbling bass, and snare touches. A seductiveness couches “We On 1,” party-starting exhortations double-dutching atop one another in a calculated, vertigo simulation of deliriously altered states of being. Even as it’s entirely possible to recoil from the human wreckage the mindset expressed leaves in its wake, a desire for more surely announces itself somewhere south of abject horror.

Occasionally, seeing a band live helps me to arrive at a better understanding of their latest release. This occurred with In an Expression of the Inexpressible-era Blonde Redhead back in the late 1990s, and more recently with Circulatory System. While I certainly liked Mosaics Within Mosaics before the show, witnessing the mechanics at work heightened the thrills therein. “Stars and Molecules” in particular keeps drawing me back in. Arguably the record’s “lead single,” “Stars” is of a piece with the band’s overall body of work in that it could easily be a mission statement, or a mid-point anchor, or more of an exit gambit. Mosaic’s 31 songs could be absorbed in almost any order without diminishing their impact; the spell cast is that durable, that potent. For its part, “Stars” suggests an art-student rendering of the Big Bang: creation viewed from assorted, shuffled removes, slow-motion mosh leaps into and then back out of orchestra pits, ragas disguises as reggae, a dimension-hopping demon blowing gently on the head of a microphone.

Michael Cera, “Of a Thursday”

Oh, sure: I’ve had a go at Michael Cera’s expense, and arguably, I was unduly kind. Don’t know the dude, but there’s something mealy and off-putting about his persona and the roles he accepts. So True That, his new solo album, is a head-scratcher, mostly because it’s among the better, least ostentatious debuts I’ve listened to this year. I’m most partial to cuts like “Of a Thursday,” where Cera roots around in the dusty crate of ragtime piano jags with a laidback, charming self-certainty, like a rogue lush commandeering the hotel bar’s Baby Grand and inadvertently driving all regulars to the brink of tears. What a joy!