A Victim of His Own Legacy

The dynamic career of Elvis Presley is captured in a new box set. 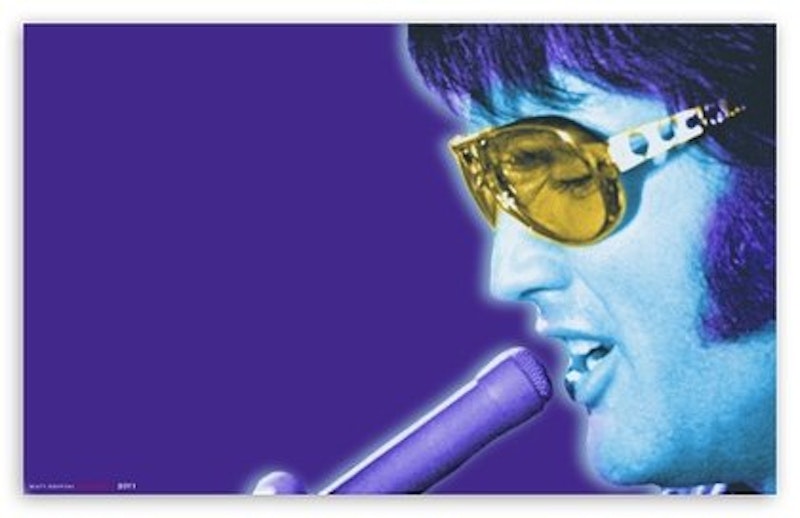 It would take an imagination as gigantic as Elvis Presley’s voice to think of something that hasn’t already been said, multiple times, about the American legend of music and instantly recognizable cultural icon. In all the attempts to understand Elvis as rock ‘n’ roll’s founding father, Elvis as precursor to the sexual revolution, Elvis as international inspiration, and Elvis as the dark psychological portrait of self-destruction, there is often a tendency to overlook the reason Elvis became beloved in the first place: the music.

When a man has more charisma than a room full of movie stars, communicates something essential about the racial integration of American art and sociology, and personifies freedom for millions of teenagers around the world, his music is likely to fall into the background.

It’s unfortunate that, in many ways, Elvis’ legacy is a victim of his own impact, because much of the greatness of his music, including the remarkable deftness and dynamism of his post-Hollywood years, get lost in the elevation of Elvis to symbol in cultural studies.

The career of Elvis Presley reached two apexes of musical excellence. The first, and the highest, is the most visible and obvious. In the 1950s, Elvis through his own primal passion, force of will, and sense of artistry, helped combine the black blues of Beale Street with the rural ache of the Tupelo front porch. The result was a sound as black and white, as sacred and profane, and as familiar and dirty as America. His good looks and provocative dancing rhythm were a direct challenge to the sterility of Eisenhower America. It was his voice, however, that brought it all together. The magic of his voice—at once operatic and raucous—lent itself to genre experimentation, and possessed the pathos of life’s intermingling of tragedy and triumph.

The second prime period of Elvis’ career began and ended with two historic concerts: The 1968 Comeback Special and the 1973 Aloha from Hawaii concert, which was the first international satellite broadcast. In ‘68, Elvis appearing in black leather, reminded the world why and how he earned the nickname, “King of Rock ‘n’ Roll.” At the risk of appearing dangerously unhip during his Hollywood years, especially in comparison to the Beatles, the Stones, the Doors, etc., he reemerged looking and sounding better than all of his competitors. The sitting sessions of the show, which featured Elvis and band telling stories from their early years and playing stripped down versions of old classics, was a precursor to both MTV Unplugged and VH1 Storytellers, and it reintroduced the world to the organic and powerful simplicity of rock’s Sun Studio infancy.

In 1973, Elvis had slowed down, but he got back into excellent physical condition and delivered an apotheosis of his country-soul-pop personality of musical dexterity he began developing immediately after the ’68 special.

A new CD/DVD box set, That’s The Way It Is, taken from live shows in 1970, captures Elvis fully in the stage of that development. The ’68 Comeback Special was essentially the final performance of Elvis as rock ‘n’ roll singer. He transformed fully into a hybrid of soul, country, and pop—almost a new genre—with the release of the album From Elvis in Memphis in 1969. The album’s highlights include a definitive rendition of the Philadelphia soul song, “Only The Strong Survive,” Elvis’ inventive transformation of “Long Black Limousine” from a country ballad into a R&B and gospel mix, and the soulful and socially aware “In The Ghetto.” Around the same time, Elvis also put out the singles, “Suspicious Minds” and “Kentucky Rain.”

Elvis went to Las Vegas for a series of shows in 1970. A documentary film crew filmed his rehearsals and first few live performances for a movie called That’s The Way It Is. Elvis released an album under the same name, comprised equally of newly recorded studio material and live performances from the Vegas shows.

The new box set—a 10-disc monster featuring eight CDs and two DVDs—pulls together, for the first time, all of the recordings from the 1970 series of shows in Vegas, along with the rehearsal session Elvis did with his rhythm section. The result is a treasure chest of interdisciplinary genre bending—soul, pop, country, gospel, and even some rock ‘n’ roll—all held together by Elvis’ massive and, at times, magical voice.

Given that the set lists all of the shows collected in the box set were very similar, there is plenty of repetition. All the shows open with Elvis giving a full-throated shouting rendition of “That’s All Right,” and they all close with the trifecta of the scorching “Suspicious Minds,” an epic and dramatic take on “Bridge Over Troubled Water,” and “Can’t Help Falling in Love.”

The standards are all enjoyable. Elvis hadn’t yet reached the full disaster of his drug addiction, and, at least musically, due to his soaring vocals and the virtuosity of his backup band, could do no wrong. At a certain point, many of the versions become interchangeable. That doesn’t mean that there are stunning moments of surprise. For example, on almost every concert disc, Elvis performs the Ray Charles hit, “I Got a Woman.” Elvis’ take is strong, but nothing spectacular, until one gets to the August 12 Dinner show. The song suddenly brings out the beast in him. He screams and growls his way through the lightning quick version, managing to sound so impassioned, he becomes dangerous.

The box is full of moments like that—a fiery “One Night” on disc seven, an amazing medley of “Little Sister” and “Get Back” on disc six, a tight and sleazy take on “Baby Let’s Play House” on the rehearsal disc—but the real highlights of the set are the songs that Elvis debuted during those run of shows.

Elvis revisits the soft voice of “Love Me Tender” on his reworking of “I Just Can’t Help Believin’.” The Sweet Inspirations, a trio of backup singers, add beautiful gospel harmonies to the song about blind faith in unrequited love. “You’ve Lost That Lovin’ Feeling” becomes not a blue eyed soul pop ditty, but an epic plea of desperation to grasp onto a dying love. Elvis’ screaming turns the song into something major that the Righteous Brothers never envisioned, and never achieved. The song, “I’ve Lost You,” is another country, pop, and soul hybrid, featuring Elvis’ beautiful harmonizing with his bevy of backup singers.

The arrangements on these songs are big, just as the band is gigantic. In addition to Elvis’ rhythm section and backup singers, there is a near orchestra—horns, strings, and conductor. The bombast of Las Vegas, something Elvis helped create, is often subject to ridicule, but That’s The Way It Is captures it before it became self-parody. When Elvis shouts “1,2,3,4!” and the band launches into the rock and rhythm and blues blaster, “Patch It Up,” any listener can take joy in hearing a uniquely gifted performer settle into a quiet prime, and lead a talented band through an exegesis of greatness; full of rowdy pleasure and sweeping emotion.