On Future Accidents (Our Mouth), the Brooklyn trio builds a bridge from its guttural noise past to a diffuse, atmospheric future. 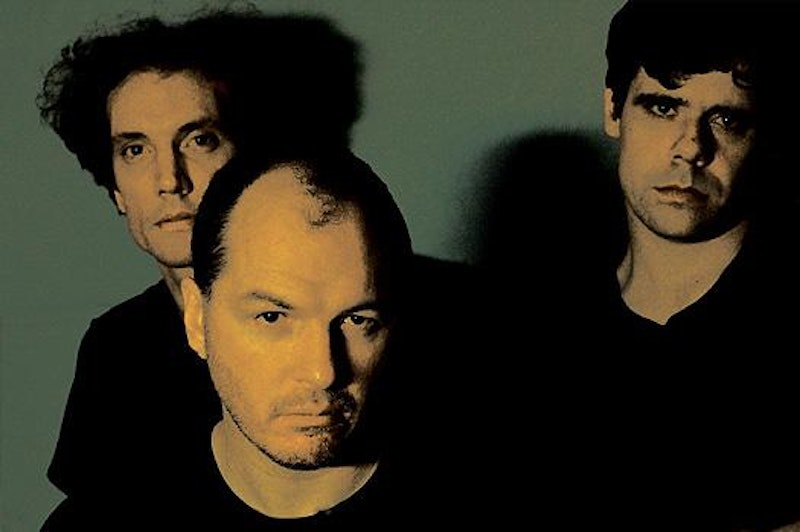 Upon the millennial-era releases of Sightings and Michigan Haters, the phrase “ambient Sightings” would have been laughed out of whatever room Sightings’ industrial-fracas blare had just finished clearing. They were that polarizing, back then: the bronzed guts of nascent songs banging mindlessly—around in cages, muscles, membranes, murder scenes-in-progress. Hardcore, furious, eating everyone—you, the competition, and oblivious bystanders—like a famished Matter-Eater Lad at a scrap yard lunch buffet.

Years passed. The crushing violence gave way to a ponderous, washed-out malevolence, as though subsequent Sightings albums were recorded through a sweat sock, or from a safer remove. It wasn’t like singer/guitarist Mark Morgan, bassist Richard Hoffman, and drummer Jon Lockie were going mellow on us. The band continued to consider us through a blood-red haze, but from slightly different angles; Sightings went almost meditative, its snarling dispatches exercises in delayed gratification.

The sessions for 2010’s City Of Straw yielded songs that didn’t make the cut, and the first three tracks on Future Accidents sound of a piece with its predecessor: the shredded-by-design crackle of “On A Pedestal”; the daft arrhythmic pile-up “The Knotted Horse,” which could double as the name of an especially squalid dive bar. These songs, and prime-rib Sightings banger “To The World”—scuttling scrapes and eclipsing surges of wrenching, metallic feedback spilling from guitars, drums that alternate between idling-rollercoaster clop and high-octane death rattle, brownout bass lines—find the trio at the tail-end of an era, having achieved an almost samurai-level degree of calculated not-really-fractal poise; the seeming instability of its constructions revealed less as nuanced high-wire act than as crafty illusionism.

Then “Public Remains” happens, a subdued wonder, a 20-minute chasm of calm. No sneering vocals. No jackknifing tempos. No scare tactics. Just the sickly inhale and exhale of elements familiar from Sightings’ catalogue, spaced and stretched: snatches of fluttering drums, yawning, alien chords scorching the sky, the cavernous growl of bass, sprigs and drips and hummingbird flights of rainbow distortion that seem to circle, hover, and swoop in from all directions at once. Just like that, as though this were something preordained, what was meant to be all along, “Sightings ambient” takes flight. There’s no going back from here.