Cherie Lily, creator of Houserobics, explains how she fuses dance music with fitness, her love of spandex, her experiences in New York City and more in this exclusive interview. 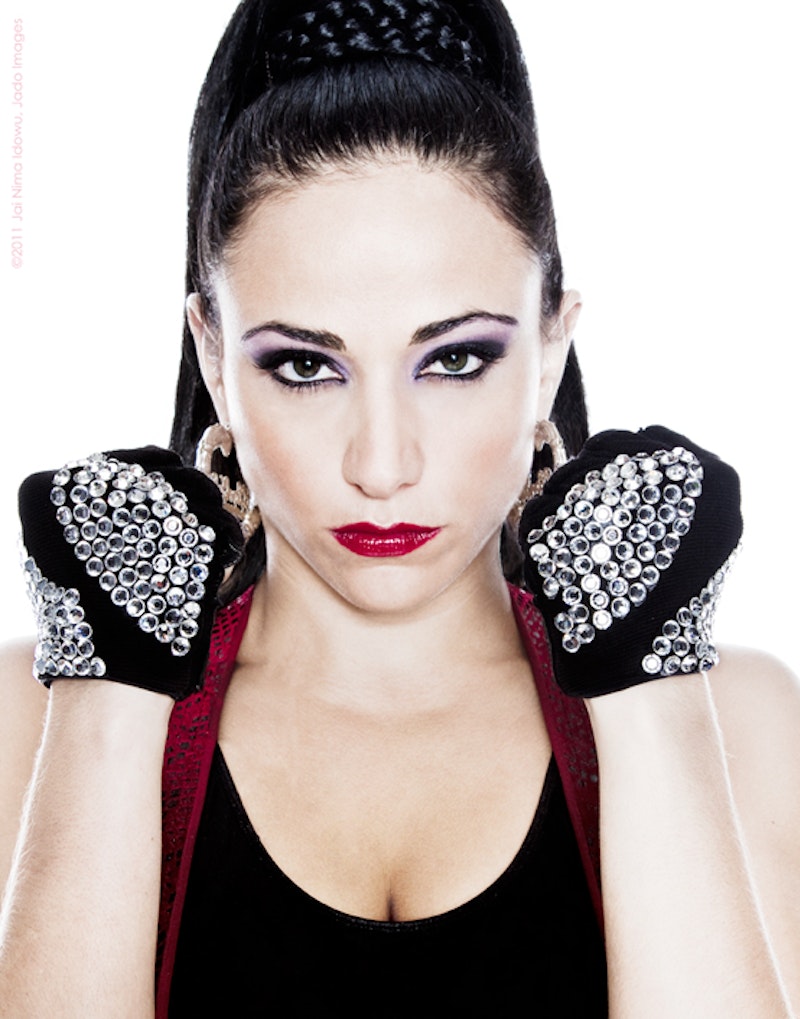 Houserobics mastermind and fitness temptress Cherie Lily really knows how to “WERK,” just in case you were wondering. Cherie—Ms. Lily, if you’re vampy—produces tangy, fierce fatale, dance-your-ass-off music that’s one-part bass throbbing club bangers, two parts music you’ll want to work out to. Or actually, music that will make you want to work out in the first place, for all you people out there who haven’t been to a gym since high school. Fusing a passion for fitness and dance music, Lily, a mainstay on the New York City club scene, is the mastermind behind Houserobics, the bridging of house music and aerobics. Working out—or werking out!—has never been so catchy. Trust.

Lily’s promisingly titled single “Dripping Wet” is due soon, along with a brand new EP the first week of October. Plus, she’ll be doing a slew of live gigs between now and then. So in case it starts raining lime green leotards in your city, chances are Cherie Lily is in town and you’d better follow the trail of glitter to get to her. This week, Cherie Lily performed a high-energy set at Santos Party House—the hip Chinatown club where the Persian beauty wed punk rock legend Andrew W.K. in 2008. I caught up with Cherie just before she burned the stage down at Santos.

SPLICE TODAY: I saw you perform in that fabulous leotard and high ponytail at the Highline Ballroom (NYC) a couple weeks ago. The whole time I kept thinking, “Wow, look at her werk!”

CHERIE LILY: Oh my god, how fun was that show?

ST: It was everything. And it was also pretty telling since one of your singles is actually called “WERK.” How does “WERK” fit into your vision of “Houserobics”?

CL: Houserobics is basically the combination of my two passions. I work in group fitness at Equinox and Crunch, and I’m also a musician. I was trying to think about what I wanted to focus my attention on, and I couldn’t chose between fitness and music. So I decided to join them together and ended up creating “Houserobics,” which is high-energy dance music infused with fitness lifestyle. It’s basically really fierce dance music to get sweaty to, to work out to, but you can also go to the club and dance and get crazy [Laughs].

ST: It’s funny, everyone goes to the club and dances for hours without realizing the workout they’re getting from all the dancing.

CL: Totally. And that’s what I really want my music to do—to encourage people to get up and dance. When you exercise, when you move your body, when you do anything that has to do with getting in touch with your physical being, 99.9 percent of the time you feel better. You start to get those endorphins going, and that’s basically the main essence of my music.

ST: Can people take a class in “Houserobics” with you?

CL: I have classes that I teach at Crunch and at Equinox. I have my first signature class that I launched at Crunch (NYC) called “WERK,” and it’s based off my single “WERK.” The class is basically a vogueing, ballroom, and runway class.

CL: It’s amazing! And I teach it with a choreographer and dancer named Rachel Warren—she is an amazing dancer. You can go to www.crunch.com and look at the days and times we teach it. I teach “WERK” on Mondays at the Lafayette location.

ST: Now that I’m hearing you talk about the concept behind “WERK” the class, I totally understand the music video for “WERK” the single that much more. It’s so good to watch, like eating a candy bar, which I guess maybe you shouldn’t be doing if you’re working out.

CL: Thank you so much!

ST: How do you come up with your looks? It seems like fashion is such a big part of the Cherie Lily experience.

CL: Yeah, well my look is strong, sexy, feminine—kind of like a Wonder Woman or a Super Woman vibe. I have lots of strappy pieces, lots of layering on top of my leotards, which kind of adds this whole S&M vibe, even though it’s more fitness than S&M because it’s fun and bright. Basically we just go to Spandex World and have a field day [laughs].

ST: Actually it’s funny because I was just at the Patricia Field store, like 20 minutes ago. It made me think of you.

CL: I love Patricia Field. I could go to that store everyday and be in heaven. I remember when I first came to New York—at the time I was in two bands, one called SPANK and another called Flürt—when I was looking for costumes to wear for my performances, I would always go to Patricia Field first. I think her store has been really revolutionary as far as the “Downtown” New York City fashion scene goes.

ST: How would you describe this “Downtown” scene or aesthetic to people who don’t live in New York?

CL: The scene is the—it’s a mixed crowd—but I would say the scene is the LGBTQ scene that has really been super supportive of me. The scene is just an anything goes situation. Like the fact that I could show up to a club in a thong lace leotard and not feel strange, not feel intimidated, or not feel any evil vibes from other people being like, “Slut!” “Whore!”—or whatever [laughs], but actually the opposite of that. This feeling like: Yes! Work! You look fierce! Live it!  The vibe of being able to express yourself and being encouraged to do it. You get inspired by other people’s pushing of the limits—whatever they’re wearing, or whatever they’re choosing to do. It’s a crazy ball of energy.

ST: How did you end up New York, anyway?

CL: I moved to New York in 2002 from Chicago. I was working in the fashion industry as a model agent—at Wilhelmina Models representing male models, then male models at Ford. It was a blast.

ST: Did the city scare you when you first got here? I know some people get to New York and they see all the hustle and bustle and they’re just like…Can’t…Deal.

CL:  Oh, yeah. When I first came here I was working like four or five jobs at once. It took me about four years before I really felt like New York was a home, or that I even liked it. But I feel like you’ve got to go through that. If you can push through that initial, “Ugh, it’s so dirty. I hate having a roommate. I hate moving four times a year,” if you can push through that, eventually you will find your place, you’ll get settled.

ST: And speaking of getting settled, tell us how you meet your husband Andrew W.K.?

CL: At the time I was in Flürt and I was booking models at Wilhelmina, and one of my clients was saying he had to do a booking through email because he was on vocal rest. So my next question was, “Oh, do you sing?” And he said, “Yeah, I’m in a metal band and I’ve lost my voice, so I’ve been seeing this vocal coach who specializes in rock singing.” He sent me her website. I wanted to go see her but she was expensive.  But she had this DVD for sale, so I bought it. It’s called The Zen of Screaming, and Andrew W.K. starts off the DVD. And then I just had this really strong urge to go see her. I went to my first appointment with her, and I could tell that the guy having the lesson before me was the guy from the DVD. It was Andrew! And I was like, Wow, this is so authentic! The guy from the DVD is having a lesson before me! Sure enough he came out and it was Andrew. She introduced us, and that was it. I started going to the lessons and Andrew would be there and eventually he asked me out.

CL: Yeah—a real New York fairytale. He swept me off my feet and was like, if you want to live your dream, I’m going to help you do it.